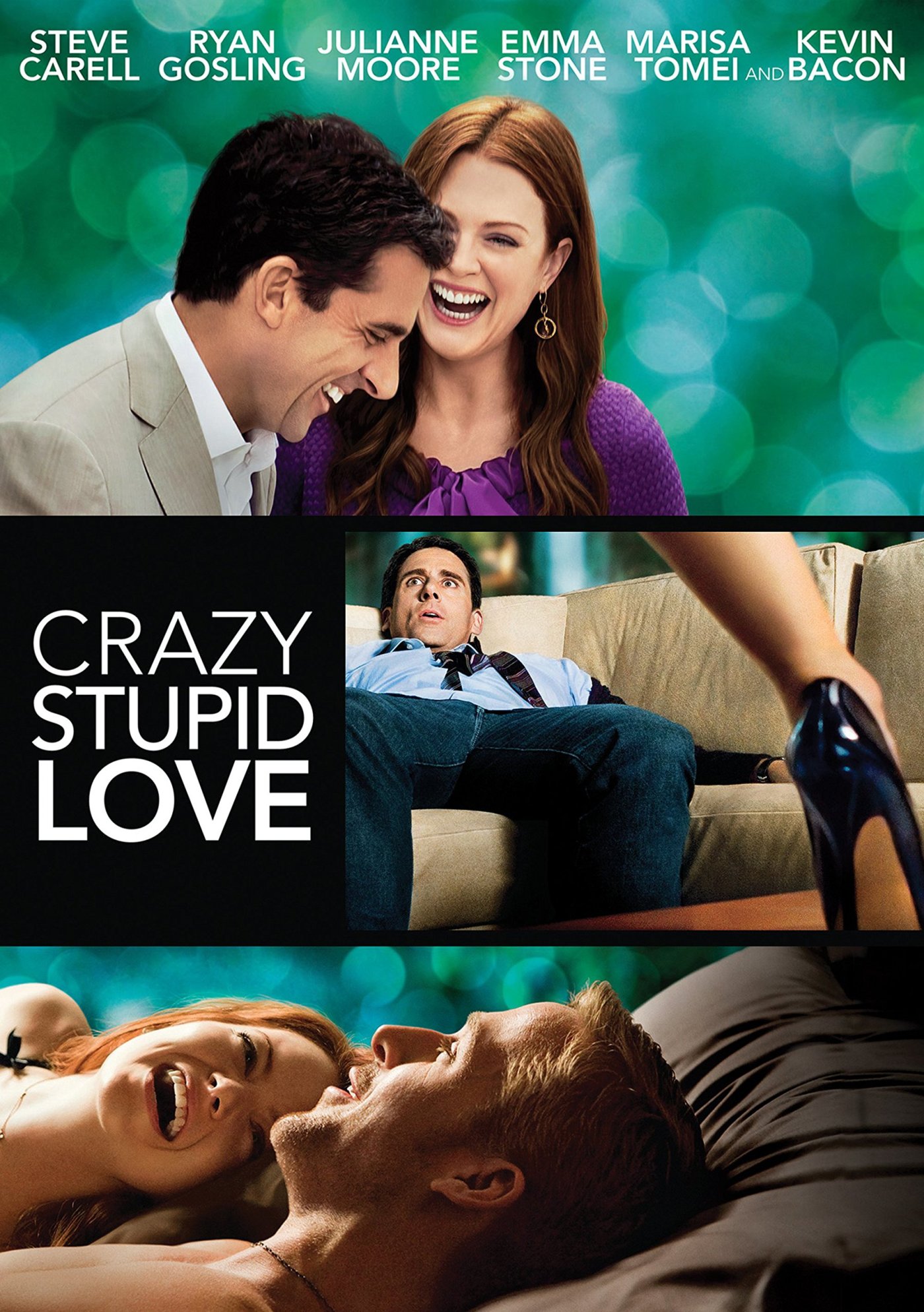 (Read this in my publication In Retrospect – Issue 2)

Crazy, Stupid, Love, directed by Glenn Ficarra and John Requa, opens with Cal (Steve Carell) and his wife Emily (Julianne Moore) having an awkward meal at a restaurant. Emily promptly and publicly admits that she has had an affair with her co-worker David Lindhagen (Kevin Bacon) and that she wants a divorce, forcing Cal to move out of his house and away from his children Robbie (Jonah Bobo) and Molly (Joey King). Whilst drinking his sorrows away in a bar, Cal meets Jacob (Ryan Gosling), a young, attractive womaniser who we previously meet trying to chat up law student Hannah (Emma Stone). Whilst Hannah’s storyline plays in and out of the main one, Jacob proposes that he can help Cal turn his life around by teaching him how to start living as a single man. After a quick make-over, and more than a few slaps, Cal and Jacob begin to form a much-needed friendship as Cal attempts to get over Emily.

After a number of one night stands, including a rendezvous with easily bedded Kate (Marisa Tomei) who turns out to be Robbie’s – slightly crazy – teacher, Cal realises that Emily is his soul-mate and is told by Robbie that he should never give up on her. Robbie is meanwhile taking his own advice by trying to impress his babysitter Jessica (Analeigh Tipton) who, to his dismay, has a secret crush on his Dad. As Cal’s neighbours and friends begin to think him a ladies man, he tries to get back in contact with Jacob. Jacob, however, has other plans as he finally wins over Hannah and is now at the stage of meeting her parents.

This plot doesn’t follow an overdone storyline and it remains interesting throughout by bringing in new distractions and obstacles for Cal to overcome to win Emily back. The fact that he is still chasing her is another positive of the film. This emphasis on ‘soul mates’ is a dominant theme and makes the film easier to relate to, focusing on a more heart-warming ending than if Cal decided to give up and meet somebody else.

The exposure of Hannah’s place in the film, one of the aforementioned obstacles, opens one of the funnier scenes in the film and is one that brings nearly the whole cast together. Additionally, the film doesn’t try to be funny; it doesn’t force jokes in your face constantly, but you do laugh on occasion and when you do, it’s because the film was worthy of a reaction. This subtle humour is what’s to be expected from Carell. His characters are never the confident, comical lead role; he is the lead here but we derive his humour from his insecurities which Gosling picks up on. These two characters work really well together which is why the film doesn’t become boring; you can’t beat a new on-screen bromance.

At the minute, we haven’t seen Ryan Gosling in many films, apart from last year in Blue Valentine and one of his first appearances in The Notebook in 2004. Gosling gave very powerful performances in both of these, always engaging with the audience, consummating a lot of pure emotion from them. Here, Gosling shows a funnier, less serious side but he still plays his role effectively and adapts quite a charming persona. We will be seeing a lot more of him over the next year though, firstly on September 23rd in Drive and later in The Ides of March, directed by George Clooney, which is set to be released on October 28th.

We’ve also been seeing a lot of Emma Stone recently, beginning predominantly with her role in Superbad in 2007. Her character here is similar to her role as Jules, until her fifteen minutes of craziness mid-way through the film which recedes her performance slightly. This opinion is soon eradicated, however, as her following scene with Gosling in the bedroom is classically romantic and shows both of their brilliance in perspective.

Kevin Bacon, even as a big name, doesn’t seem to have much personality in the film, appearing only on occasion to mix up the story. Carell, acting as an everyday man, cannot be faulted, always adding a playful side to his role, and even the acting of youngster Johan Bobo deserves some commendation.

Overall, Crazy, Stupid, Love is an engaging and gratifying film to watch and it’s worth going to see if you want a light-hearted rom-com.