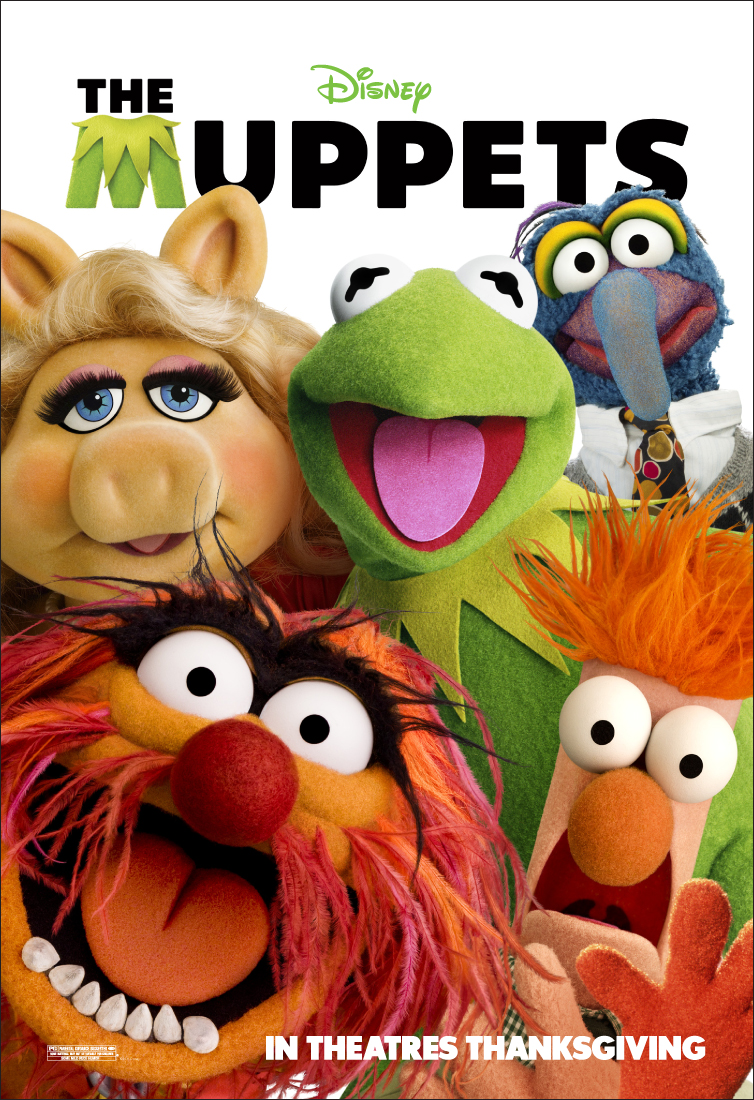 (Published in Issue 7 of my publication In Retrospect)

The Muppets, directed by James Bobin, follows Walter (performed by Peter Linz), the world’s biggest Muppet fan, and his brother Gary (Jason Segel) and Gary’s girlfriend Mary (Amy Adams) who must raise $10 million to save the Muppet Theater from Tex Richman (Chris Cooper), a businessman with plans to demolish the building to dig for oil. To raise the money, the trio must first attempt to reunite The Muppets cast, who have each gone off in new directions with Fozzie Bear performing with a group of Muppet impersonators, the Moopets, Gonzo working as a plumbing magnate, Animal has ended up in a celebrity anger-management clinic sponsored by Jack Black and Miss Piggy working as Vogue Paris’s editor for plus-sized fashion. So will the trio be able to get the cast back together for one big show to save their heritage? Of course they will, it’s the Muppets!

As the first Muppets theatrical release in 12 years, this film was long-awaited by all ages and has since become the highest-grossing Muppet film to date. Written by Segel and his co-writer Nicholas Stoller (who worked with Segel on Forgetting Sarah Marshall), The Muppets has been a particular passion project for actor/writer Jason Segel for quite a few years, and it is this passion that undeniably shines from start to finish and is reflected excellently in the script.

The Muppets is genuinely a really good film that, primarily focusing on the largely asked question ‘where are they now?’ – before all of the film’s promotion at least – brings the much-loved characters back together for one, let’s not hope last, big show. Encompassing a bit of everything we love about film, the storyline is fluent and clear and with the addition of the brilliant musical numbers that we can expect from The Muppet cast, there is enough to keep all of the audience entertained at a high level throughout. I genuinely haven’t heard a bad thing about it (but let’s face it, who doesn’t like The Muppets?) and, aside from one negative comment that I will talk about below, there is nothing to complain about.

Jason Segel, as always, is brilliant and, as well as for writing the film, is the reason as to why it both works so well and has ultimately done so well. Unfortunately, it was Amy Adams‘ role in the film that I really didn’t enjoy. I understand that the film was supposed to be cheesy and light-hearted and that it could get away with being ‘silly’ in places, which Segel pulled off brilliant. Adams, however, took this too far and made the scenes she was involved in seem like a piss-take rather than a bit of fun. Just like her role in Enchanted, I find her acting intolerable after more than a couple of minutes. I know she can be a serious actress, and I probably need to watch The Fighter to change my opinion of her, but at the minute I only see her acting as annoying and over the top, and that – almost – ruined The Muppets for me, and I’m not really looking forward to her role as Lois Lane in the upcoming Man Of Steel film now either.

Nevertheless, to take the focus away from this one small part of the film that I didn’t like, there were many other famous faces that appeared on-screen as well, including Rashida Jones, Zach Galifianakis, Ken Jeong, Neil Patrick Harris, Jim Parsons, Emily Blunt, Jack Black, David Grohl, Whoopi Goldberg, and Selena Gomez, even if many of them were only for a few seconds. It was still great to have these great actors and musicians involved, and I especially loved Jim Parsons‘ appearance as the human form of Walter. What a great way to make the amazing ‘Man Or A Muppet’ song even better.

No matter how much I enjoyed the film though, that’s as far as my comments go. Yes, it was brilliant, of course it was, but I’m not going to say it is the best film of the year because it isn’t. Let’s just enjoy it for what it is, and that’s a great nostalgic film that we can all watch over and over again.