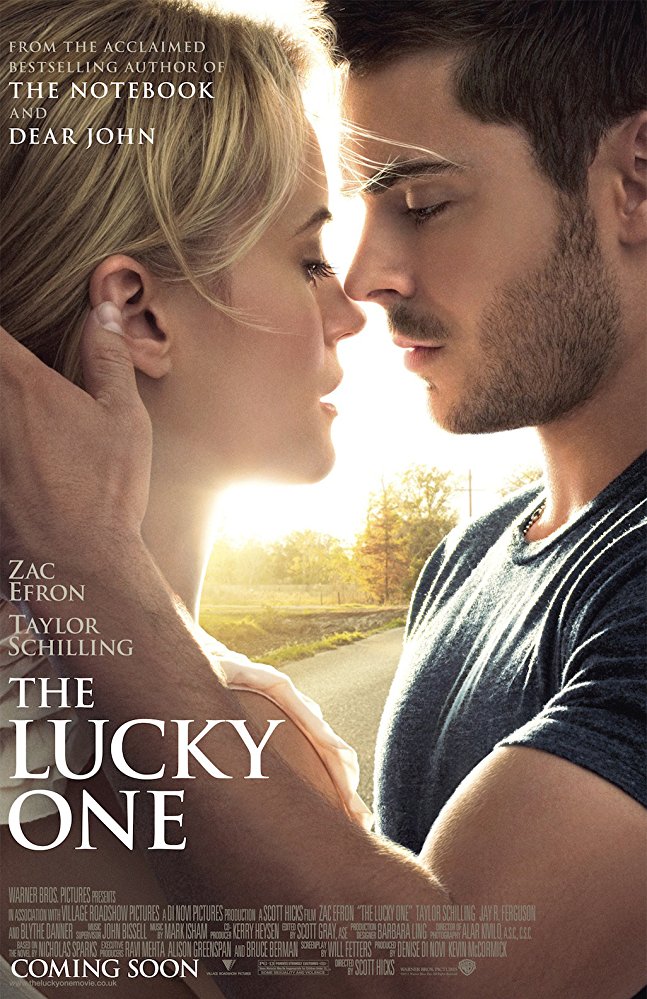 Directed by Scott Hicks with screenplay by Will Fetters, The Lucky One is an adaptation of the 2008 novel of the same name written by Nicholas Sparks, author of The Notebook.

Starring Zac Efron in the lead role as an ex-Marine, the film follows Sergeant Logan Thibault who, whilst fighting in Iraq, finds a photograph a woman, Beth Clayton (Taylor Schilling), whom he credits for keeping him alive. Wanting to thank the woman he believes to have kept him alive during his time in the war, Logan travels to Louisiana where he finds single-mother Beth and ends up taking a job at her family-run kennels with her grandmother (Blythe Danner). As Logan gets to know Beth, however, the secret of why he turned up at her door in the first place becomes deeper and deeper buried. Whilst Beth’s ex-husband Keith (Jay R. Ferguson) becomes determined to find out for himself, a romance begins to blossom between Logan and Beth, but has the secret been kept for too long?

Producer Denise Di Novi has already brought three of Sparks’ novels to the cinema with Nights in Rodanthe, A Walk to Remember and Message in a Bottle, and this in total is the seventh of his novels to be adapted altogether. At the very least we’ve all heard of – or avoided – The Notebook, so it’s easy to guess how the story will pan out. The story has Sparks written all over it and for the best part of the film it does go how you would imagine, but it does not follow the typical romantic clichés. I keep reading that the film doesn’t have any surprises but whilst we know that a romance will eventually blossom and that something will get in the way, we are still left to guess what form these obstacles will take.

Unfortunately, it just isn’t on par with The Notebook or A Walk To Remember at all, far from it on an emotional level, but it isn’t a throwaway film either. It doesn’t break your heart or reduce to a blubbering mess but it does give you a small lump in your throat at times. The romance is mature and there are a couple of deep story lines that run in the background; the focus on war, especially, makes it more moving but it is the character of Beth’s husband that brings in a darker side to the film and is what will make it stand out for an older audience. These scenes again though are not pushed to the same level that we have seen with Sparks’ other novels; it’s a great plus to have these themes in place but they do constantly need to be taken further.

There were a few holes in the plot but, not having read the book, I will put it down to the source material, as it was obvious that the constant diversions of asking who Logan really is were used to make the story lengthier. Other than that there was very little to complain about it terms of story as it ran smoothly which, despite having a predictable storyline, does not become boring.

As for the casting, of course Zac Efron is brilliant for the role, and this is the main reason that people will be watching this film at all. Just like his role in Burr Steers‘ adaptation of Ben Sherwood‘s novel The Death And Life Of Charlie St. Cloud, but with a little more stubble, Efron is great at saying little but still saying a lot through his impressionable gaze. It is all about his appearance, though, as that’s what gets your heart racing. At the same time though he does give a strong performance and it was what the film needed.

Efron’s on-screen chemistry with Taylor Schilling unfortunately doesn’t quite hit the spot. For a largely unknown actress she did extremely well, as other adaptations of Sparks’ novels have had two popular actors leading the film so it wasn’t as easy to connect to Schilling’s character as, say, with Rachel McAdams‘ role in The Notebook. Still, Schilling’s character does emit quite a lot of emotion, but it was more about her family situation rather than her romance with Efron’s character that gets any reaction. The sex scenes were far too PG for their relationship to really endorse any appreciation, or at least the first one was, but it was still very romantic.

There was a great backing cast too though; Beth’s young son Ben’s (Riley Thomas Stewart) role was really well acted too, but it was that of the grandmother, played by Blythe Danner (who is actually Gwyneth Paltrow’s mum I’ve just read), that I enjoyed the most. As one of my favourite older actors, I had hoped for more of an emotional relationship between her and Schilling’s character, as from The Last Kiss we know she can get a great and deeply motivated audience reaction from her roles, but her inclusion was still a really pleasant addition.

Whatever the case, The Lucky One is definitely one to buy for the shelf to have ready for one of those rainy days when a good romantic film is needed, because at least it does that well enough.

3 thoughts on “Film Review: The Lucky One”