(Published in Issue 12 of my publication In Retrospect)

After the huge success of The Avengers earlier this year, this month sees the release of Marvel‘s latest film, The Amazing Spider-Man. Directed by Marc Webb, the film is a reboot of Sam Raimi‘s original Spider-Man trilogy that starred Tobey Maguire in the lead role. Now with Andrew Garfield taking the role as Peter Parker, a.k.a the web-slinging superhero that is Spider-Man, we see a different, more personal side to his story. As Peter finds a clue that might help him understand why his parents disappeared when he was young, his path puts him on a collision course with his father’s former partner Dr Curt Connors (Rhys Ifans), whose current experiments with animal stem cells will change the lives of them both.

Not expecting much before going to see this film I was extremely impressed. Only having the original films to base my pre-judgements on, The Amazing Spider-Man works at a much better level because it has an emotional depth to it. With a large focus on Peter’s family, living with his Uncle Ben (Martin Sheen) and Aunt May (Sally Field), and his relationship with Gwen (Emma Stone), the film pays a lot more attention to Peter. From the beginning, his character is set up incredibly well, and from then on the film explores his character finding himself, relating to the audience on a more personal level.

Because of both Garfield’s acting and Webb’s direction, this time around we actually care about who Peter is and what he becomes. His character here is one that the audience can engage with and it’s because of Webb’s direction that we even want to. Scenes of Peter at school and skateboarding in the streets add an extra layer to his character, a personal one away from his superhero alter ego that really works to allow the audience to view him as a genuine person, rather than just a nobody who puts on a mask.

But the film pulls us in many other ways too, in a large part by tying in with some of what we know from the original films, including a background story around the Osborn family – Norman Osborn a.k.a The Green Goblin (Willem Dafoe) and his son Harry (James Franco). Having not read the comics myself, it would seem that the film ties in well with its original source too, introducing us to a new set of characters including Peter’s bully Flash Thompson (Chris Zylka) and his first love, Gwen Stacy (Stone). Whilst the film is a reboot, it has enough changes to make it stand out as a unique film but it also has some similarities that the audience can find comfort in. 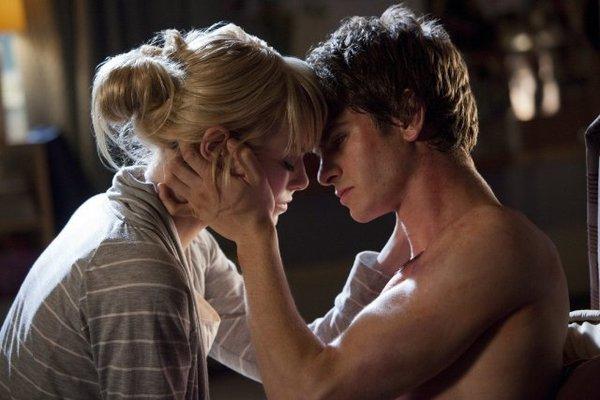 The biggest change is Peter’s romantic connection with Gwen, as the original films focused on Peter’s relationship with his red-haired neighbour Mary-Jane Watson (Kirsten Dunst). In the comic books, MJ was Peter’s second love-interest, and Gwen did make a short cameo in Spiderman 3 but she was not played by Stone at this point. These are further examples of how the film ties everything together for both comic book readers and fans of the original films alike, but this change in the female lead also brings something fresh to the reboot.

These constant connections and attention to detail are one of the films best qualities. It’s obvious throughout that Webb knew what he wanted to do and why he was doing it, and because of this we, as an audience, find ourselves going from laughter to sadness, to genuinely caring about what will happen next. The film even has a successful romantic undercurrent, something I’ve found fault in with most of this year’s other releases, but that’s to be expected from Webb. His previous film and directorial debut 500 Days of Summer is one of my personal favourites – a great rom-com that avoids only appealing to a female audience – and Webb certainly met my expectations again with this latest effort, fitting in quite a sexy romantic connection between the film’s leads for a film that is typically watched by males.

The film’s score really works in these scenes, too. Whenever Garfield and Stone get close there’s a beautiful melody that plays in the background, even if it does sound like the Titanic soundtrack at times, but then when the scenes become more action-packed the score turns into something quite epic. It’s a great complement to the film and is one that composer James Horner should almost definitely be awarded for.

But The Amazing Spider-Man doesn’t only have a great director and composer, it also has a host of great acting. As already emphasised throughout this review, Andrew Garfield is brilliant for the role, re-vamping a superhero that isn’t always as well-favoured as the many others. Not only is Garfield incredibly handsome – something at first I thought would actually set him apart from the Spider-Man role – but his acting has always had a great passion behind it. It was his role in Never Let Me Go when I first noticed this and it is this that has brought a great credibility to this film. As again already mentioned, this addition of emotion lets us engage with the character of Peter Parker which I have never been able to do before; another of the film’s biggest attributions.

Garfield’s on-screen chemistry with Emma Stone, too, is extremely enjoyable. I’ve always believed that Stone was a great actress but she seemed to really find her feet in this action-based film, making a great comparison to the American comedies that we are used to seeing her in. Rhys Ifans, too, was really fitting in more of a serious role for him too. Since The Boat That Rocked he’s really starting to make a name for himself, I think, whilst he also made a great addition to the final Harry Potter instalment last year. With a great backing cast too – especially with Sally Fields and Martin Sheen as Peter’s guardians – the cast is a really strong aspect of the film, almost putting it on par with the recent Dark Knight reboot which will come to an end later this month.

The only negatives of The Amazing Spider-Man are that the 3D is more-or-less pointless, only having a handful of moments where I would say it was worthwhile, and the Lizard does look pretty substandard. But don’t let that put you off – it may not be amazing but it is pretty damn good.