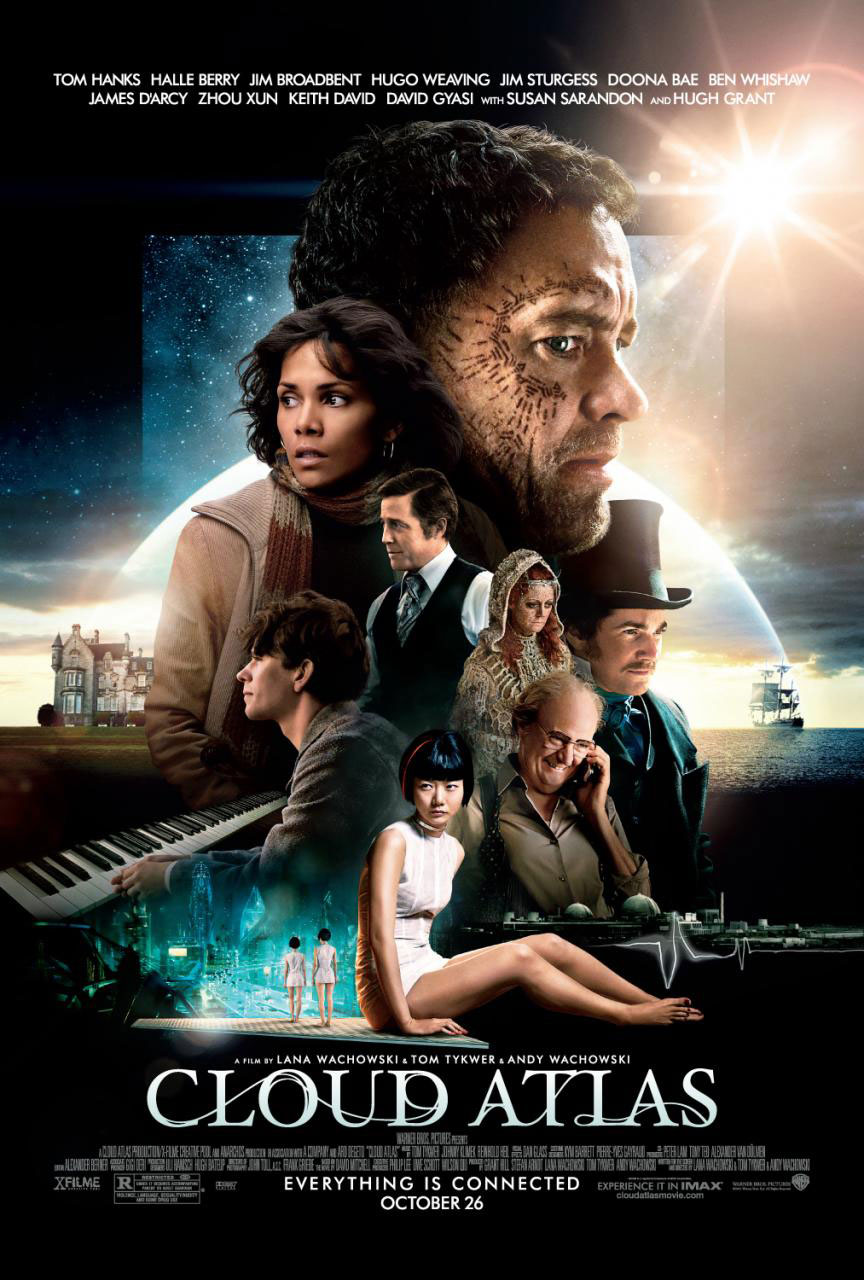 (Published on Lost In The Multiplex)

Based on the 2004 book written by David Mitchell, and written and directed by Lana and Andy Wachowski and Tom Tykwer, Cloud Atlas intertwines six subtly interconnected stories, spanning from the 19th century to a post-apocalyptic future.

In the book, Mitchell cuts all but one story in half, shifting to the next story as soon as its predecessor reaches a cliffhanger. The central chapter, Zachry’s post-apocalyptic future, is the only full-length chapter, which follows with the book returning to tell the second half of each story in reverse order. This “Russian doll” structure works exceptionally well in the book, giving us time to invest in the many characters and their stories, and swiftly moving on to the next whilst leaving us with the suspense of wanting to know the fate of the character before.

However, this structure in the book also meant that it was a little too complicated to connect the stories together at first, as aside from the occasional single sentence in the middle of a story that would remind us of a link we were constantly trying to figure out, it is very easy to find yourself engaged in the single stories rather than the bigger picture.

To better intertwine these stories, the film adaptation plays them out simultaneously, going back and forth between multiple strands of its different characters and time settings. The directors really couldn’t have done it any better. There was obviously a lot of thought gone into how the narratives would connect with one another, and it certainly pays off as the film constantly shows how the stories link, helping us to better understand the film’s premise as a whole.

Having read the book I knew how each of the stories played out so this worked brilliantly on-screen, but in the back of my mind, I was constantly wondering if I would be able to understand the film if I didn’t already know these characters. At the beginning of the film, my answer would have been no, introducing the audience to many different characters in a short amount of space. It does, however, better expand into the individual stories and, by the end, it’s easy to be involved in each of them singularly as much as it is with the whole film.

My favourite thing about the book and the aspect I thought the film would have fallen short on is that Mitchell managed to create six very different but brilliantly detailed and layered worlds, each spanning vast amounts of time and space. Miraculously, the three directors manage to bring these worlds to life just as well, creating six equally strong stories and sets of characters and making each of them as believable as possible.

“What is an ocean, but a multitude of drops?”

Another thing I love about the adaptation is the use of only a handful of actors for a large set of characters, as each actor took on a number of roles. The make-up is extremely laughable in places but it is also fantastic at the same time, with some of the cast even playing different sexes and races. The performances were surprisingly strong, too. Tom Hanks and Halle Berry undeniably lead the film, but I especially enjoyed the performances from Ben Whishaw and Jim Sturgess. For readers of the book, the performances will be one of the strongest qualities of the film, as each of the actors suited their many roles, bringing to life their characters in the most superb way.

Saying this, however, this also brings in one of my biggest flaws of the adaptation, my main problem being with the language used in Sloosha’s Crossin’ chapter, which is a chapter in the book I struggled reading in itself. Whilst with the book it is easy to re-read anything you couldn’t quite string together, there isn’t enough consideration taken in the film as to how the audience might deal with this language alteration, especially when they have enough to be thinking of with the complex structure as it is. Maybe it was just me, but I found it very hard to understand most of what these characters were saying, but this is mainly due to a lack of clear dialogue than the use of downgraded language itself.

Moreover, Hugo Weaving is fantastic as Old Georgie and I loved the way he was brought into his scenes, creeping and hovering in the background, but, again, I couldn’t hear a word he was saying, which lost this very important chapter a lot of its impact.

It is because of these few flaws and this chapter as a whole where the adaptation fell short in my eyes, not emphasising The Fall and therefore the overall message that “an act of kindness ripples across centuries to inspire a revolution”. Whilst the film met most of my expectations, it didn’t go any further at this point to make me come away thinking ‘wow’. It was here where I expected the adaptation to really bring the stories together and give that impact, something which the book also failed to highlight well enough, but it didn’t give that final push to peak my excitement and leave me completely impressed.

Moving away from the structural differences, Cloud Atlas is a brilliant adaptation overall. Aside from the loss of a couple of sub-stories (Frobisher’s relationship with Ayr’s daughter and Sonmi-451’s time at college, to name a few), the adaptation sticks very closely to its original source, leaving very little missed out or unexplained and giving as much background information as is needed.

Because of that, Cloud Atlas is a fantastic film that goes above most for its efforts alone.