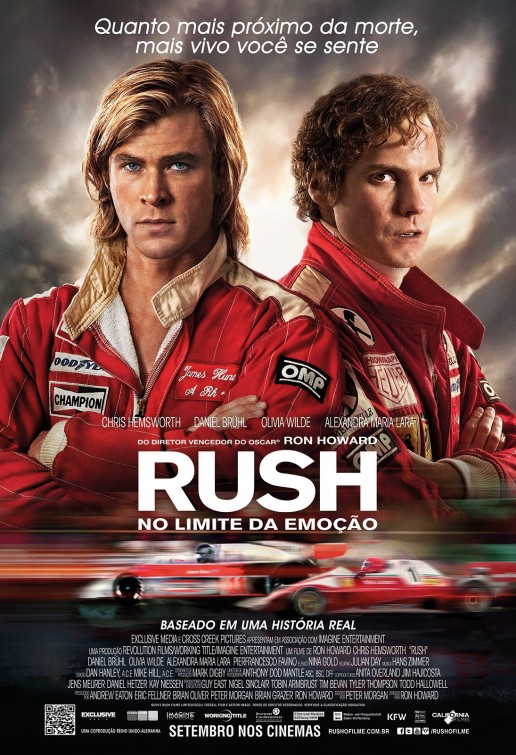 Directed by Ron Howard, Rush is a biographical action film that tells the exhilarating true story of the merciless rivalry between two Formula One drivers – the charming and charismatic Englishman James Hunt (Chris Hemsworth) and the Austrian statistics-obsessed Niki Lauda (Daniel Brühl). Centred around the 1976 season, Rush follows these drivers on and off the track, taking us into their personal lives and along the track they road which ultimately reached the breaking point of physical and psychological endurance, where there is no shortcut to victory or margin for error. If you make one mistake, you die.

Personally, I hate anything related to Formula 1 and the Grand Prix and am not usually a fan of anything in the car/racing genre, but Rush is incredible. It has a bit of everything – drama, action, comedy when needed, romance at times – but most of all, Rush is full of human emotion. Focusing on the rivalry between James Hunt and Niki Lauda, director Ron Howard really brings the story to life, making their relationship and feud a powerful one to find yourself in the middle of.

Whilst a somewhat simple story that doesn’t hold many surprises, Rush is both thrilling and gripping in its delivery. Engines roaring and fast camera movements, showing images from the pistons pumping to the blades of grass beneath the wheels, the racing scenes are exciting for racing fans and non-fans alike. The visuals, as well, are outstanding, with vibrant colours that suit the sporting story well.

With a great story to work with, the strongest element of Rush is its performances, with the leads being played superbly by Chris Hemsworth and Daniel Brühl. The two actors give their best performances yet, but it’s Brühl who gives the most impact and it really is a performance worth all the hype it has been given. When the final few scenes intertwine real-life footage into the mix, as well, it’s amazing to see how well Hemsworth and Brühl fit into their roles and portray the characters of Hunt and Lauda, and how their chemistry has been transformed near perfectly onto the big screen.