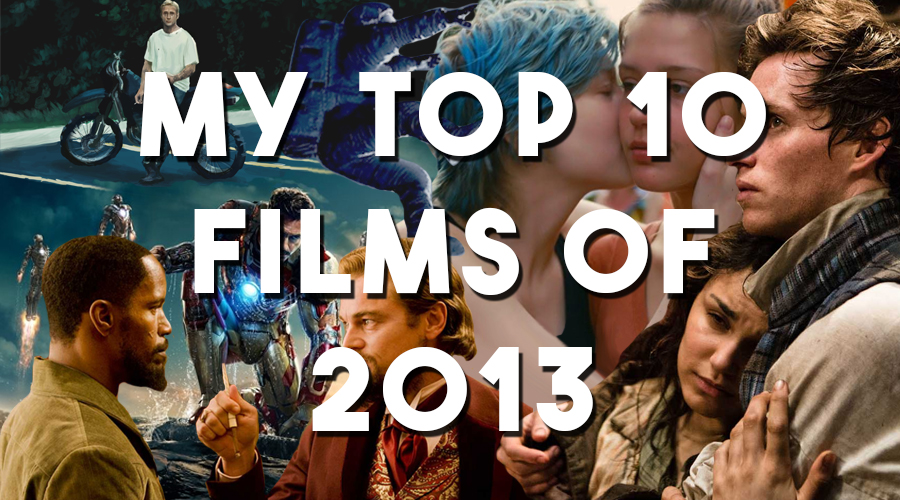 This year I have watched more films than I ever have in a year before, reaching a total of 771 films (82 released that year and 665 for the first time). My most watched directors were Joel and Ethan Coen and my most watched actors were Robert De Niro and John Goodman.

This list obviously changes as I catch up with more films, so for an updated list you can visit my Letterboxd page.

10. Blue Is The Warmest Colour

I haven’t felt so invested in a relationship all year; Léa Seydoux and Adèle Exarchopoulos give absolutely captivating performances. Their believable and raw chemistry is overwhelmingly beautiful and powerful, and their painfully honest and modern coming of age story is the best I’ve seen not only this year, but probably ever. It’s intense both emotionally and physically, with some quite passionate and explicit sex scenes, allowing the audience to absorb in every moment of Adele and Emma’s relationship. The performances really are magnificent, but the film is also beautifully shot, highly relatable (in some sense at least) and quite heartbreaking at times. It really is as good as everybody is saying.

“I have infinite tenderness for you, and I will my whole life.”

I had been waiting to see this for ages as it didn’t show at my local cinema, but it was certainly worth the wait. As director Chan-wook Park’s English language debut, I’ve only seen this and Oldboy from his filmography but I’m already in love with his work. Stoker is the perfect thriller in that you know something bad is going to be revealed, but you never know what it is going to do next or where it is going to go. The performances are excellent too. Mia Wasikowska, Nicole Kidman, and Matthew Goode are all phenomenal. This is definitely a break out performance for Wasikowska, who I’ve found hard to enjoy in her career so far, but Kidman plays her role incredibly well, too. Each of their characters have their dark sides and are developed brilliantly, but it is Goode who brings in the intensity.

Prisoners is a chilling, dark, and at times terrifying, dramatic thriller that will result in you questioning your own morality. How far would you go? Not as far as Hugh Jackman does, that’s for sure. The direction is fantastic, with the somewhat disturbing story being handled excellently and the character studies breaking through, Most of all, Prisoners is a great mystery, not letting anything slip and keeping you guessing until the very last minute, literally. I’d be surprised if anybody saw this conclusion coming, but if you were doubting the character set up then shame on you! The performances are all fantastic, with Jackman and Jake Gyllenhaal giving excellent leads. Whilst Paul Dano doesn’t have an awful lot to say, it was his role that impressed me most, however. I’m not much of a fan of his bigger roles, but when he has a small role for a big character, he really does know how to leave an impact. The cinematography really suits the story, too, with the bleak colours and woodland settings making you feel just as alone as the missing girls and their father searching for them. It was obvious that Roger Deakins was behind this as it’s the only time I ever have anything to say about how good a film looks, as he always captures the settings and atmosphere perfectly.

I loved the first film, so there was no doubt in my mind that Catching Fire wasn’t going to be anything less than four stars. What I didn’t expect, however, was that it would convert non-fans of the first instalment, so I’m quite pleased that this will be in many people’s Top 10 lists this year! I had high hopes about this sequel as soon as it was revealed that Francis Lawrence was set to direct it. I knew he would be able to handle the story better than anyone else, as despite I Am Legend being a very average film, he set up the dystopian society really well.

The first major release since Joss Whedon’s hugely successful crossover film Avengers Assemble, it was always going to be interesting to see how these individual stories would follow, and, in the end, whether we would miss the rest of The Avengers team or not. Personally, The Avengers didn’t even cross my mind, so much so that the constant references to an alien invasion in New York City last summer confused me. Iron Man 3 is a perfect follow-up to both of its predecessors, working as a confident solo return for Tony Stark but also as a step back to get us interested in the individual characters themselves again.

Well, he did it again – this is now my second favourite Tarantino film and it certainly bettered my already high expectations. Firstly, I didn’t expect this to be funny at all, but I surprisingly found myself laughing throughout. Scenes such as an argument over a set of KKK masks are completely out of the blue and not at all expected, but they fit perfectly into the setting that Tarantino has so masterfully created. I’m not usually a fan of westerns but as everybody has already said, Tarantino has definitely made this genre his own. It’s far from anything else anybody has done with the genre, in comedic value, but also because of its serious nature as it looks at the darker side of slavery that is often washed over. Whilst westerns are known for their violence and classic shoot-outs, it’s never been done quite like this before. Even the scenes of brutal violence, something that is often a strong factor in Tarantino’s work, become comical; it’s unbelievable how much blood comes from one body. In the final scenes, especially, the gore is taken beyond what is necessary, but there is no arguing with how brilliant these scenes are. This is undeniably Tarantino’s bloodiest film yet, although I did still crave for more at times. Just like a large part of Pulp Fiction, many of these scenes stand out as brilliantly directed pieces of cinema and by the end of the cinematic year, they will undoubtedly remain some of the most memorable. With the best scenes nearly always involving a gun, I think it’s safe to say that Django has topped my list for the best shoot-out of all time, as well.

Crime, glamour, cleavages, and perms, from the style to the extravagant performances, American Hustle started the year off with a dazzling show of ruthless twists and elaborate characters. Intensely clever but equally bizarre, American Hustle begins with a caption stating that this is “mostly true”. Like with last year’s crime comedy Pain & Gain, also based on a true story, it’s hard to pull yourself away from a film when you know it’s true (mostly) but you just can’t quite believe it. Con men and tricksters who you know you shouldn’t trust become your best friends as you find yourself rooting for them to succeed, no matter who they hurt or cheat in the process. In real life, this wouldn’t be the case, but Russell gives the story so much humour and glamour that you just can’t help yourself.

3. The Place Beyond The Pines

Split into three acts, The Place Beyond The Pines spans two generations with Act 1 focusing on Luke (Ryan Gosling), Act 2 focusing on Avery (Bradley Cooper), and Act 3, set 15 years later, focusing on Jason (Dane DeHaan). If there’s one thing for certain it’s that Derek Cianfrance knows how to tell a story. Just like his directorial predecessor Blue Valentine, one of my favourite films of all time which also starred Gosling in the lead role, The Place Beyond The Pines has a powerful, ruthlessly realistic and deeply detailed plot, this time focusing on the relationship between fathers and sons.

Each act has its strengths, but this somewhat fragmented approach is what prevented me from giving the film the five stars I gave Blue Valentine. The Place Beyond The Pines just isn’t as coherent, peaking in its first act, ending with a bold turning point you wouldn’t have predicted from the trailers alone, and moving into the middle act at too slow of a pace to keep the same impact that it was building up to. Instead, this middle act is what bridges the gap between each of the three stories. Albeit proving that script for this film would have been detailed down to every last breath of air, it also leaves you worrying where the story will go from here. I guess it was always going to be hard to follow Gosling’s lead as he is what would have enticed most of us into seeing this film at all, so for me, without giving away any spoilers, this is what breaks the story up so adversely. Fortunately, Act 2 picks up towards the end and the third act concludes the film just as well as the first act opens it, but the small pit stop in the middle does put a momentary pause on Cianfrance’s brilliant film-making approach.

Quickly rising to the top of my favourite films list, Gravity is a captivating thriller featuring mind-blowing special effects, powerful storytelling, and technological advances beyond all compare. Gravity really is a cinematic experience, which deserves many awards for director Alfonso Cuaron‘s dedication alone. But what’s so great about Gravity is that it really makes you part of the experience. It’s almost claustrophobic at times, as if you’re in a small room with little air one minute then being swung around in the infinity of space the next. By the end, all you want to do is to take in a big breath of fresh air, forgetting that we had a full supply during the time we suffered with the characters who didn’t for 90 minutes straight. For this reason, the film also excels because of its performances, which are depended on heavily. Sandra Bullock is absolutely phenomenal and this is the best performance I have ever seen from her. Whilst there’s also a fantastic supporting role from George Clooney from time to time, it all comes down to Bullock to hold your attention, fear, and the entire suspense of the film and she does so superbly.

To say you should only watch this if you like musicals would be wrong, as the genre of musicals is extremely varied. Lately, they are often mixed so much with comedy that they become laughable (for example, Mamma Mia, Rock of Ages, and High School Musical). Les Misérables is something very much different. With only a few words spoken throughout the whole film, the entire story is told through song. The film, therefore, relies heavily on its performances, which are – unsurprisingly – superb all around. Hugh Jackman and Anne Hathaway are absolutely incredible in the main leads, and it is their characters who give the most impact. The fact that the cast all sang their songs live on set means that you get to hear every choke in their voices, and therefore feel every emotion that their characters are feeling.