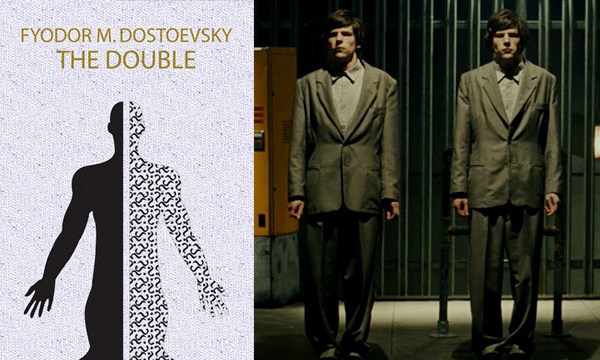 If you’re a fan of literary adaptations then no doubt you’ll currently have your head stuck in a copy of Joyce Maynard’s emotional coming-of-age novel Labor Day, Nick Hornby’s heart-warming suicide drama A Long Way Down, or maybe even Veronica Roth’s debut dystopian Divergent. What we’re looking forward to most, however, is Richard Ayoade’s upcoming adaptation of Russian author Fyodor Dostoyevsky’s dark comedy novella, The Double.

Set to star Jesse Eisenberg and Mia Wasikowska in the leads, the story follows a man who is driven insane after finding out his life has been assumed by a doppelgänger. But although his doppelgänger looks exactly like him, the two are complete polar opposites. With screenplay written by Ayoade himself alongside fellow scribe Avi Korine, and his first film since the hugely successful Submarine, the original novella was released in 1846. Subtitled “A Petersburg Poem“, showing the surreal and grotesque influences of Russian novelist Nikolai Gogol, Ayoade’s adaptation is sure to get some big, albeit uncomfortable, laughs.

In anticipation for the release of The Double on 4th April here in the UK, let’s have a look at six of the greatest literary adaptations, from a classic romance to a modern story of mental illness.

1. The Classic: To Kill A Mockingbird

It’s a worrying fact that film adaptations don’t always get it right, but it’s promising to think that many of the classic novels we have loved reading have been adapted into films that are as much of a classic as the novels themselves. Some of the most iconic of these include Ken Kesey’s One Flew Over The Cuckoo’s Nest, F. Scott Fitzgerald’s The Great Gatsby, George Orwell’s 1984, and Anthony Burgess’s A Clockwork Orange. Our pick from the classics, though, is Harper Lee’s one and only novel, To Kill A Mockingbird.

Published in 1960, the novel follows a lawyer in the Depression-era South, who defends a black man against an undeserved rape charge, and his kids against prejudice. The novel itself was immediately successful and won the Pulitzer Prize, with the film adaptation being released only two years later in 1962, directed by Robert Mulligan and starring Gregory Peck as protagonist Atticus Finch.

Whilst, as previously commented, both film and novel are considered classics on their own, of course the adaptation has its flaws. Whilst the only real plot difference is that some of the subplots involving the children were removed to concentrate on the trial, a main criticism is that a lot of the novel’s emotional impact is lost, as you don’t connect to the characters in the film as well as you do with the ones in the novel. But that’s a common criticism for literary adaptations, and one that you would seldom see a film vs. book comparison without.

Whilst still classics on their own, we have to consider this genre on its own, as the Victorian literature era has been the influence of some of films most beautiful period drama adaptations to date. From the Brontë sisters’ Wuthering Heights and Jane Eyre to Jane Austen’s Pride and Prejudice, Sense and Sensibility, and Emma, the 19th century saw such female authors dominating the writing scene with their enduring classic romances. The most famous of these Victorian novelists, however, was the great Charles Dickens, and we’ve chosen to include his thirteenth novel, Great Expectations.

Having been adapted over 250 times for various mediums, most recently by Mike Newell in 2012, it is David Lean’s film adaptation that remains the most loved. Winning two Oscars on its release in 1946, the adaptation saw John Mills play the part of Pip, Martita Hunt as Miss Havisham, and Valerie Hobson as Estella. The story centres on Pip, a humble orphan who suddenly becomes a gentleman with the help of an unknown benefactor.

Such literary adaptations have their own advantages as these period dramas, whether decent adaptations or not, are always stunning in their costume design, style, and location settings.

One of the greatest contributors to literary adaptations is author Stephen King, and it would be wrong not to include one of his novels when over 100 of them have been adapted into feature films and TV productions. But where to begin? Stand By Me, The Shawshank Redemption, It, Misery, Pet Sematery, Children of The Corn, I could go on… Of course, The Shining was always at the top of the list as the adaptation is one of the greatest horror films of all time. But I’ve decided to go with his first novel, Carrie.

Published in 1974 and written as a series of newspaper articles and letters, the story follows a shy high school girl who uses her newly discovered telekinetic powers to exact revenge on those who tease her. Originally adapted by Brian De Palma in 1976 and starring Sissy Spacek, the adaptation received two Academy Award nominations and has been terrifying viewers with its ending few scenes ever since.

Carrie has also been more recently adapted by Kimberly Peirce in 2013, but you don’t need to see that one.

Whilst authors such as Stephen King are often having their novels used by a director for their screenplays, someone in the opposite seat choosing such novels is iconic director Alfred Hitchcock. Known for his psychological thrillers and use of suspense, many of Hitchcock’s better-known films were adapted from literature, including The Birds, Strangers On A Train, To Catch A Thief, Vertigo, and most famously, Psycho.

In an interview with François Truffaut, Hitchcock was asked about his approach to literary adaptations, commenting that: “What I do is to read a story only once, and if I like the basic idea, I just forget all about the book and start to create cinema. Today I would be unable to tell you the story of Daphne du Maurier’s The Birds. I read it only once, and very quickly at that.”

One of my favourite novels that Hitchcock went on to adapt was Daphne du Maurier’s 1938 novel Rebecca, which he released in 1940 starring Laurence Olivier as the brooding aristocratic widower Maxim de Winter, and Joan Fontaine as the young woman who becomes his second wife.

And what would we be doing if we were to talk about literary adaptations without mentioning some of the biggest franchises to date? Literary adaptations often succumbing to the inevitable flaws of having a lack of detail and background story, but at the same time they make such epic film series on their own. From big-budgeted franchises to the more recently popular Marvel and DC comic book universes, adaptations certainly have their advantages when transforming a story from page to screen.

We all have a favourite, be it J.R.R. Tolkien’s Lord of The Rings, Suzanne Collins’ The Hunger Games, George R. R. Martin’s A Game of Thrones, or Stieg Larsson’s The Girl With The Dragon Tattoo, but I’m not going to talk about books without mentioning J.K. Rowling’s Harry Potter series. The Harry Potter franchise is both the highest grossing film series and best-selling book series in history, and even though the novels finished being published in 2007 and the film adaptations ended in 2011, the admiration for Harry Potter still lives on today as much as it did then.

6. The Modern: The Perks of Being A Wallflower

To end the feature, I wanted to end with something a little more contemporary. More and more novels are getting adapted every year, with many authors having said film in their mind before their pen even touches paper. This constantly growing list of upcoming adaptations is what make up my years’ reading list, though, so I’m going to conclude with one of my recent favourites, Stephen Chbosky’s own adaptation of his 1999 coming-of-age novel, The Perks of Being A Wallflower.

With the author of the novel directing his own film adaptation, it was hard to go wrong really. Most of all, The Perks of Being A Wallflower shows how well characters can be brought to life with such a well-fitting cast. With the film adaptation starring Logan Lerman, Ezra Miller and Emma Watson as the leading trio, a well-crafted adaptation can also make its story more relatable, sometimes making the novel appear as a first draft in comparison.

We may be thrown a bad adaptation now and then, but literary adaptations sure have their gems.

One thought on “6 Of The Best: Literary Adaptations”