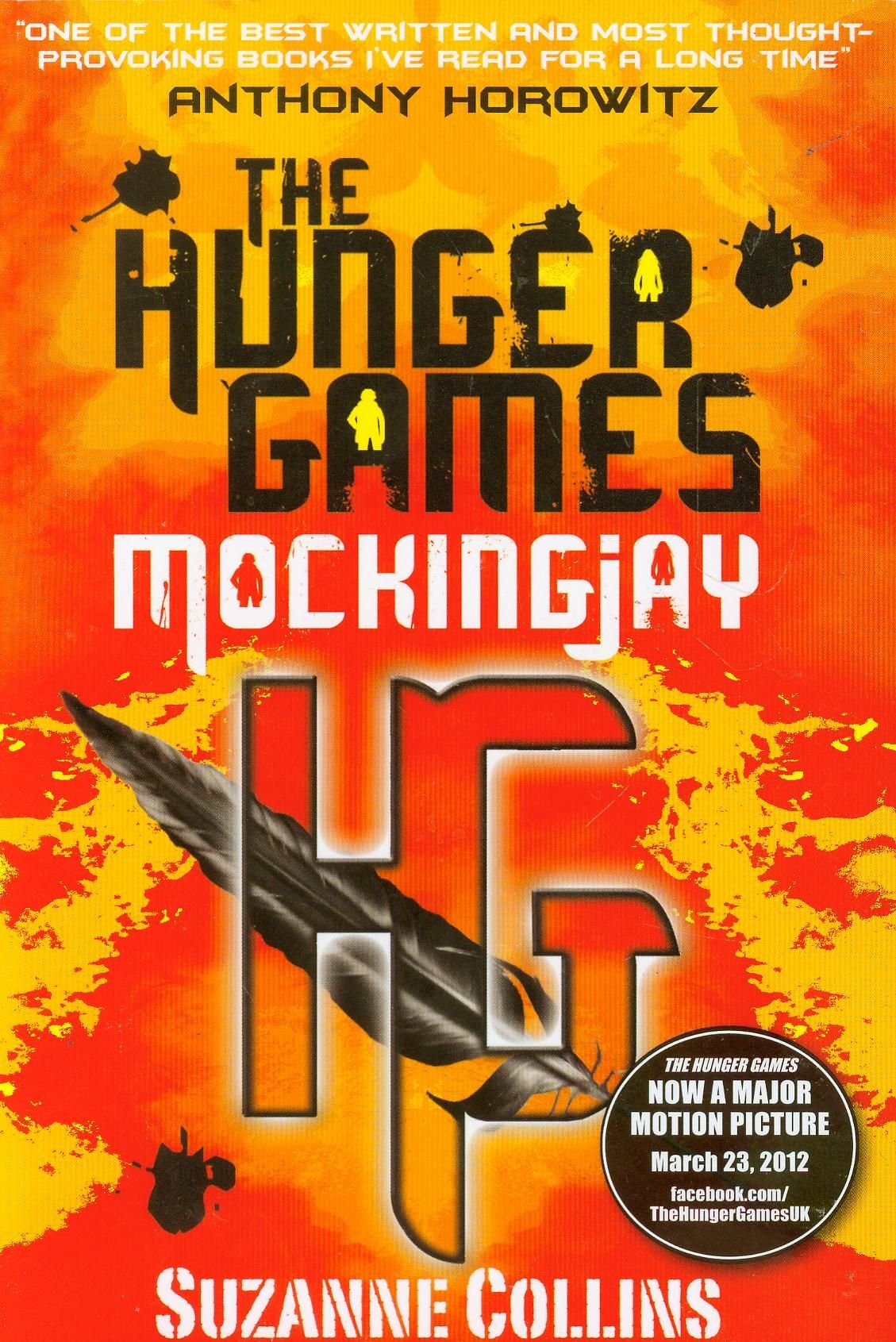 “It takes ten times as long to put yourself back together as it does to fall apart.”

Set to be released on 19th November and directed by Francis Lawrence, with Jennifer Lawrence once again in the lead role, this final book sees Katniss face her biggest challenges yet, as she must become the iconic Mockingjay, a symbol of hope and courage in the revolution, to unify the districts of Panem, fight to save those she loves, and attempt to shatter the games forever.

The following post is a review of the book only, looking at how it is going to be adapted. You can read my reviews of the two-part film adaptations in comparison to the book by viewing Part 1 here or Part 2 here.

Set in the dystopian and post-apocalyptic nation of Panem, the first book introduces us to its lead heroine Katniss Everdeen, a young girl living in the poorest of 12 districts who, volunteering to save her younger sister, is forced to compete in The Hunger Games. Set up by the government in order to maintain peace, the annual televised games see 24 young representatives fight to the death in a specially designed arena, until only one remains. Surviving the games with fellow District 12 tribute Peeta Mellark, Catching Fire sees the couple forced to return to the arena in a special edition of the games, just as a rebellion against the oppressive Capitol begins to take shape.

Catching Fire left us on a massive a cliff-hanger, with the echoing words that District 12 has been destroyed, leaving only one way for the trilogy to conclude, the only way a dystopian story should, with a final act of revolution. The best characteristics of a dystopia are always around the themes of standing up for yourself, fighting against wrong, and making a difference, and it’s what we’ve been waiting for Katniss to do.

It’s this focus on character that Part 1 of the film adaptation focuses on, following the first 12 chapters of the novel which see Katniss build up her strength and prepare for a revolution. In the novel, this first half of the book works just as well to build up the atmosphere. Emotions of fear and desperation in a world nobody wants to live in are strong, and Katniss becomes the heroine she was born to be.

However, reading the novel meant that we didn’t have to wait a year to see what happens next. As a film, it was difficult to enjoy as an instalment, merely because it was only telling half of the story. Whilst it built up the tension and prepared us for what’s to come, Part 1 was only a setup, although it did leave us all anticipating the final chapter with a lot of questions in need of answering.

Throughout the trilogy of novels, the love triangle between Katniss, Gale and Peeta has been a constant distraction, and it remains a heavy subject in this final book. But there are a few brilliant hurdles thrown into the plot to confuse things even more, and this is how Part 1 of the film ends, with the team rescuing Peeta only to find that he has been ‘hijacked’ by the Capitol. Plutarch and Beetee describe what exactly this means to Katniss after Peeta attempts to kill her on their reunion meeting, and the film closes with the image of Peeta thrashing in his hospital bed. It was an excellent way to end the film adaptation, leaving us on the edge of our seats and showing us exactly what there is to look forward to in Part 2.

With Part 1 of the film concluding around the end of Chapter 12 in the novel, Part 2 will pick up with the whole cast back together in District 13, with Finnick being reunited with Annie, Johanna recovering from the Capitol’s torture, attempts to bring Peeta back to reality, and Katniss and the rest of the team beginning their training.

The preparation for the revolution begins, and after a lot of build-up to the third act of the novel, the epic conclusion that we’ve all been waiting for is well and truly in motion.

Unfortunately, the revolution itself seems somewhat rushed in the novel, especially after the lengthy scenes of District 13’s preparations that will open Part 2 of the film. But there’s a lot that goes on before the attack against the Capitol, and there’s a lot that happens after it, too. Even so, the adaptation is sure to put its emphasis on these scenes and make this attack the centre of the story, making the most of the use of special effects regarding the Capitol’s defence systems, and putting a better focus on the characters working together and also on them individually.

Of course, with such a huge, guns-blazing battle to end it all, there are more than a few deaths in this part of the novel. Neither the books nor the films have been shy of killing off its characters so far, unavoidably so with its bleak premise, and some of best scenes in the story have revolved around such themes, with characters such as Rue, especially, moving audiences to tears. But the deaths in this final novel don’t nearly have the same impact, with most of them happening in a hurried moment, leaving them to fall insignificantly against the backdrop of everything else.

It’s a huge shame that the deaths feel this way in the novel, but I have high hopes that the film adaptation will handle these scenes much better. Nevertheless, relationships will be tested here and conclusions will be met, so there’s definitely a lot to look forward to.

With the first film directed by Gary Ross, the dystopian world of Panem was introduced perfectly. All future adaptations, however, have been directed by Francis Lawrence, director of the apocalyptic drama I Am Legend, who remains in his directorial chair for this final instalment.

Each of the instalments so far have been true to the novels, adapted excellently in terms of story, setting, and character development, and have been just as intense and gripping as the last. This final instalment is set to keep the franchise going strong, with Lawrence promising a dark and explosive end to a truly brilliant franchise.

All of the original cast will be reprising their roles, including Jennifer Lawrence as Katniss, Josh Hutcherson as Peeta, Liam Hemsworth as Gale, Sam Claflin as Finnick, Woody Harrelson as Haymitch, Donald Sutherland as President Snow, Philip Seymour Hoffman as Plutarch Heavensbee, Stanley Tucci as Caesar Flickerman, Willow Shields as Primrose Everdeen, and Paula Malcomson as Mrs Everdeen.

Part 1 saw the introduction of the beautiful Julianne Moore as President Coin, who will be returning for the final instalment, as well. She played the role incredibly, but Part 2 will allow us to see a different side of her character, which I really can’t wait for.

We were also introduced to a number of other excellent additions to the cast, including Game of Thrones’ star Natalie Dormer as Cressida, Broadway singer and actress Patina Miller as Commander Paylor, Prison Break’s Robert Knepper as Antonius, Mighty Ducks star Elden Henson as Pollux, House of Cards’ Mahershala Ali as Boggs, Diana Ross’ real-life son Evan Ross as Messalla, and The Help’s Wes Chatham as Castor.

We are still yet to meet Gwendoline Christie who will play Commander Lyme, and True Blood’s Michelle Forbes who will play Lieutenant Jackson.