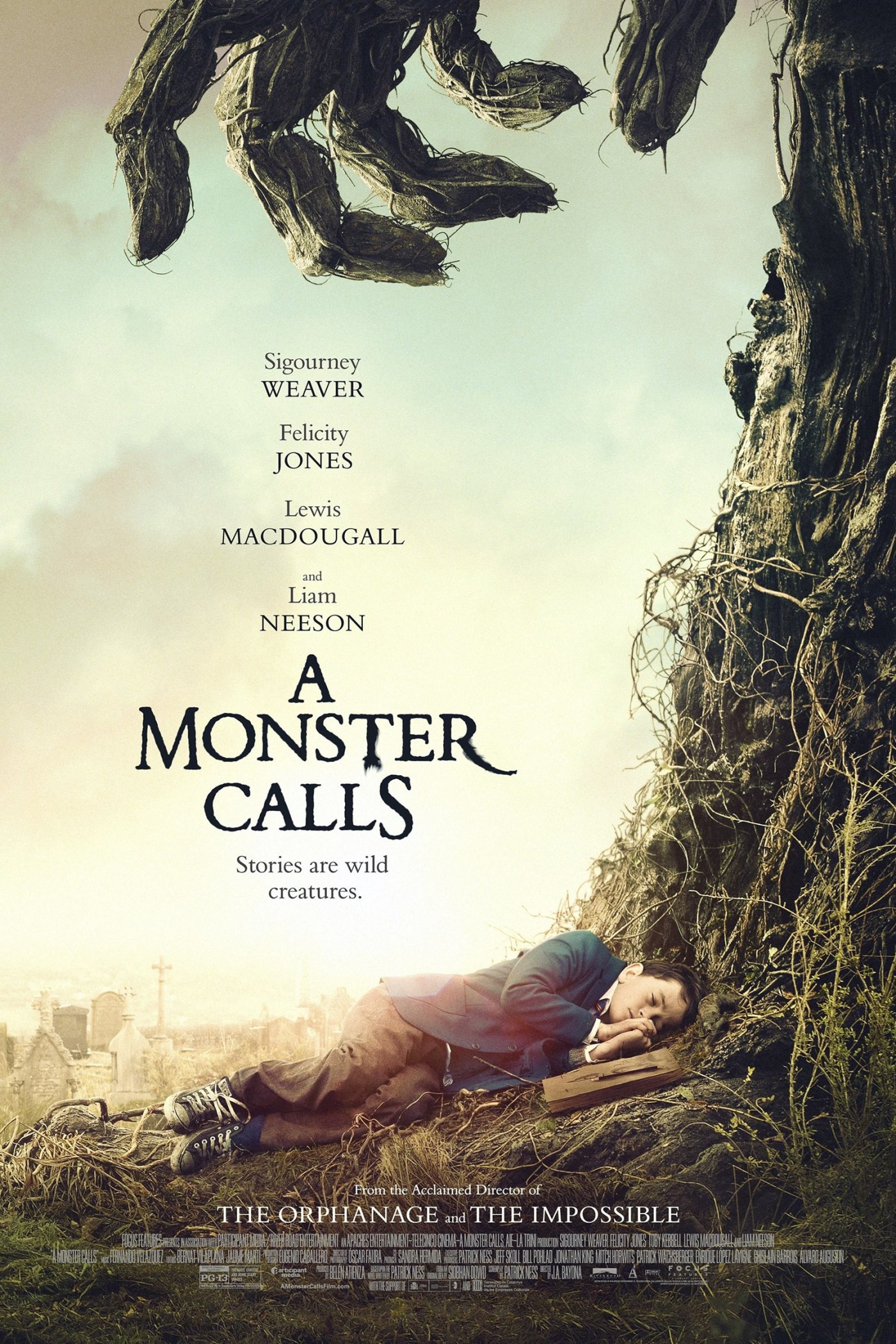 Directed by J.A. Bayona and based on the book by Patrick Ness, A Monster Calls follows 12-year-old Conor (Lewis MacDougall) who is dealing with his mother’s (Felicity Jones) illness, a less-than-sympathetic grandmother (Sigourney Weaver), his distant father (Toby Kebbell) and his bullying classmates. Amidst his troubles, he finds a most unlikely ally when a Monster (voiced by Liam Neeson) appears at his bedroom window. Ancient, wild, and relentless, the giant yew tree Monster guides Conor on a journey of courage, faith, and truth through a collection of fables.

A gothic folktale about hope, processing loss, and letting go, A Monster Calls is an emotional tale with a huge heart, transforming a difficult subject into one of strength and bravery, with a sprinkling of horror and heaps of soul.

It may not be completely original for a coming-of-age story to deal with such a mature and dark subject, but Ness explores the tragedy in a unique way, examining not just the more obvious sadness that’s on the face of it all, but the inner turmoil of his main character.

He does this by creating a horrifying monster to help Conor through his time of need, a visual representation of what’s going on in his mind to help Conor accept the truth of not just his situation, but how he feels about it. As Conor begins to understand his sadness and guilt, he is also forced to face the anger that’s been building up inside of him in order to come to terms with what’s going on.

Capturing the grief process perfectly and developing into a somewhat cathartic story about managing your emotions, it is a healthy approach to grief full of genuine and honest emotions. We don’t often get to see these emotions explored with younger characters, but Ness highlights the importance of opening up to your more negative feelings and not to bury them down.

With Ness having written the screenplay for the film, the dialogue is almost exactly as it is written in the book so the messages come through brilliantly, but it does lose some of the book’s poetic narrative. But whilst it remains quite simple in prose, the adaptation stunningly brings the book’s descriptive imagery to life with striking visuals and powerful performances.

I wrote in my review of the book that the use of fables reminded me of Harry Potter’s The Tales of Beedle the Bard, so I love that these tales are visualised in the same way as The Tale of the Three Brothers were in The Deathly Hallows. The watercolour illustrations are beautifully crafted, bursting with imagination and creativity as they help to distinguish the fantasy elements with Conor’s reality.

Most of all, you can feel every ounce of Conor’s pain through Lewis MacDougall‘s phenomenal performance, which is what makes this adaptation so moving. Just like the book, although not hitting quite as hard, the end of the film packs an emotional punch, as MacDougall builds up the intensity to a final moment of acceptance but also of pure heartbreak.

Felicity Jones, Sigourney Weaver, and Toby Kebbell are all great, too, whilst Liam Neeson brings so much presence to the monster with his voice acting.

A Monster Calls is a compelling story, one that I can only hope my children will never have to face anything like. But, if they do, I will be handing them this book and this film, so that they can cherish this story for themselves.