This week’s feature sees the release of #Roxy, Hostile, The Wound, Angelica, Fifty Shades Freed, Tad The Lost Explorer and the Secret of King Midas, and Phantom Thread.

Synopsis: A spin on the ‘Cyrano de Bergerac’ story sees big-nosed highschool student Cyrus Nollen smitten with best friend, Roxy. However, she is successfully being wooed by classmate Chris, largely because he’s enraptured her with texts…written by Cyrus. Before she knows it, she’s in love with the virtual dream-boy who has Cyrus’ wit and Christian’s good looks.

Synopsis: Resourceful scavenger Juliette is heading back to a camp of apocalypse survivors in the desert when she flips her armoured car and winds up trapped with a broken leg. To make matters worse, she attracts the attention of a creature that only comes out at nighttime – something that was once a human being but is now a mutant cannibal.

Synopsis: This South African drama (shortlisted for Best Foreign Language Film at this year’s Oscars) sees old ways clash uncomfortably with new, as rich city boy Kwanda is sent up into the mountains to take part in a traditional initiation ritual designed to make him a man. He’s bullied and singled out both for his privileged social status and rumoured sexuality, while the mentor who’s supposed to be looking out for him, Xolani, is grappling with internal struggles of his own. Xolani is having a secret affair with married childhood friend and fellow mentor Vija, but the intimacy he craves and the future he dreams about appear painfully out of reach.

Synopsis: Set in Victorian London, orphaned Constance catches the eye of scientist Joseph Barton and the two fall in love and marry. However, their romantic idyll is shattered by a difficult childbirth of their daughter, Angelica. Forbidden to have sex, Constance now sees psychological and supernatural happenings as malevolent spectres hover over her child, so she calls in the services of a medium. 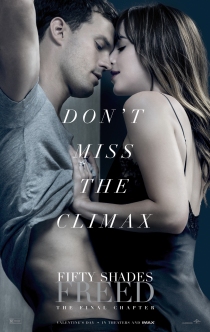 Synopsis: The trilogy reaches a shuddering climax with Christian Grey and Anastasia Steele tying the knot and embarking on a future of domesticity where kids aren’t out of the question. However, trouble looms in the form of a sexually predatory architect and a shady figure from Anastasia’s past.

Review: I was all ready to write about how awful this film is before I had even started watching it, but actually, I can’t help but think how well the books have been adapted. Whilst they sold in their millions, most of us will agree that the books were terribly written. Yet they’ve done a half decent job with the films, almost making the characters bearable to watch and convincing us that Ana and Christian are in a stable relationship. Still, the attempt at a plot is weak and reviewing this as a film, it is of such a poor quality. But they have been made for one purpose and one purpose only, and the trilogy has certainly made its money doing what it intended to well enough.

Dakota Johnson’s character is poorly developed and we really shouldn’t be okay with this portrayal of a woman (Nothing to do with her acting as she’s great in other films), but Jamie Dornan has certainly grown into the role and even I almost started falling for him. I definitely haven’t been lured into the hype and I still think that there’s so much wrong with these films, although they are much better than the books, but even the montage at the end of this instalment tried to make me believe that I had actually enjoyed these films. I suppose they’re entertaining enough, and that’s why I can’t completely slate how bad this film is, so kudos to all of the rich people who are now laughing on our behalfs.

Synopsis: A Spanish animation about a construction worker and wannabe archaeologist, Tad, who re-teams with renowned explorer Sara Lavrof when she discovers the final clue leading to King Midas’ necklace. Taken to Peru in search of the Lost City of Paititi, Tad and Sara wait for the famous Professor Lavrof, Sara’s father, to crack the code. However, things get complicated when fiendish millionaire Jack Rackham kidnaps Sara to force her to reveal the location of three parts of the treasure. 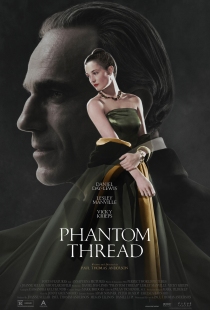 Synopsis: Set in the glamour of 1950’s post-war London, renowned dressmaker Reynolds Woodcock and his sister Cyril are at the centre of British fashion, dressing royalty, movie stars and socialites. Women come and go through the confirmed bachelor’s life, until he comes across the strong-willed Alma, who becomes his lover and muse. However, her presence soon disrupts his carefully tailored routine.

Review: Only Daniel Day-Lewis could have led this film. I hated him, but I also would have stood still for hours in silence at his request and succumb to his every word. He is such a powerful actor and is one of the few who can hold your attention so strongly for such a slow-burning story. Directed by Paul Thomas Anderson, it’s again no surprise that the film is shot as beautifully as it is acted. Like most of his films, a story like this only works with PTA’s and DD-L’s perfectionist qualities and accomplished talents.