This week’s feature sees the release of Katie Says Goodbye, We Wish You A Marry Christmas, The Blind Spot, The Christmas Contract, The Shape Of Water, The Time Team, and The Exception.

Synopsis: Sunny 17-year-old truck stop waitress Katie nurtures hopes of quitting her dusty New Mexico backwater and heading to San Francisco to become a beautician. In order to fund those dreams, she turns tricks for drivers until the arrival of ex-con car mechanic Bruno.

Review: Olivia Cooke gives another exceptional performance in this hard-hitting drama. It must have been an incredibly difficult film for her to perform in so all credit to her. However, as a film primarily about female suffering, it needed some much more development to give a better message than the one we are left with: that all of Katie’s suffering was unimportant and almost justified. That may be how some women’s lives are and there may not always be a moral outcome, but for a film like this to be made today, it needed to say something.

Synopsis: Blissfully happy couple Ian and Miranda plan to get married on Christmas Day, but they soon discover that there are complications. Ian can’t find the right words for his vows, the guest list keeps growing, and Merideth’s Uncle Charlie reveals a secret from their past. Will things go right on their big day?

Synopsis: Hardline Antwerp police drug squad chief Jan Verbeeck aka Mr Zero Tolerance causes a major stir when he announces he is quitting the force…and joining the extreme far-right party VPV. However, his last day as a cop sees a drugs raid resulting in repercussions much further down the line. In French with English subs.

Synopsis: Web designer Jolie (One Tree Hill‘s Hilarie Burton) heads home to Louisiana for the Christmas holidays after breaking up with her boyfriend, Foster. However, she discovers he’ll also be in town with his new squeeze. To avoid any hassle, Jolie’s lawyer girlfriend arranges for her brother to act as a “buffer” for Jolie, as long as she designs a new website for him.

Review: A cheesy Christmas film combined with some of the cast of One Tree Hill, yes please! Hilarie Burton was always one of my favourite characters as well, so this as just what I needed! It’s not overly Christmassy, but it is well acted and likeable so definitely worth the watch.

14th December – The Shape Of Water

Synopsis: Elisa, a mute orphan whose humdrum life working nights as a cleaner is forever changed when she meets a tall, dark stranger. This stranger is a half-man, half-fish hybrid pulled from the rivers of South America and held in a top-secret government lab.

Review: Guillermo del Toro is the man to go to if you want to make a film equally terrifying, fantastical, and engaging. He has such amazing ideas, and whilst I was worried that I wouldn’t be able to divulge in a film about a mute woman falling in love with an amphibious sea creature, it pulled me deep under the water with them.

It is a beautifully crafted and refreshingly told creature feature with hints of forbidden romance but ounces of fairytale dark magic. The effects are flawless and the performances phenomenal. The Shape of Water is simply mesmerising. 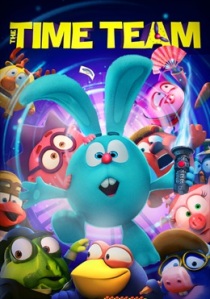 Synopsis: Krash the rabbit throws his best buddy Barry an unforgettable birthday party when he hires time travel experts the DejaVu Agency to send his buddies back in time. However, they fail to follow the rules and become scattered across the ages. Krash has to find his friends with the help of his alter ego from another time and place.

Synopsis: It’s 1940 and maverick Wehrmacht Captain Stefan Brandt is dispatched to the Netherlands to take command of the personal bodyguard of abdicated German Kaiser Wilhelm II. Capt Brandt ignores orders and makes a play for a servant girl while investigating whether the Dutch Resistance has infiltrated the house.