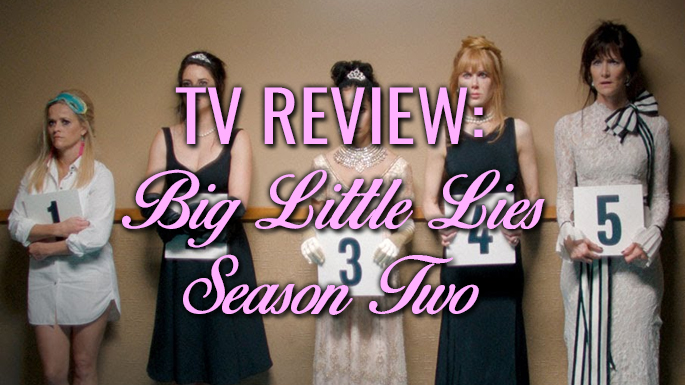 Created by David E. Kelley and based on Liane Moriarty’s bestselling book, Big Little Lies tells the tale of five mothers (Reese Witherspoon, Nicole Kidman, Laura Dern, Shailene Woodley, and Zoe Kravitz) in a seaside town in California whose seemingly perfect lives unravel after they become involved in a murder case investigation. Looking at how their emotionally troubling issues can affect a community, including their husbands, wives, children, and school teachers, this series sees Meryl Streep join the cast as the mothers must deal with the consequences of their lie.

This may not have been the series that we all thought it was going to be; Season Two isn’t a simple drama set in a police station as The Montgomery Five are investigated about their involvement in Perry’s death. Instead, it is a brilliantly well-written exploration into the consequences of keeping secrets. Exploring how one person’s actions can affect relationships between husbands and wives, mothers and daughters, mothers and sons, children and their grandparents, and how these behaviours ripple throughout generations, Big Little Lies is a well-rounded series that looks deeply into the effects that Season One had on all of these characters and their families.

Most of all, Season Two is about motherhood. It’s about the choices we make in bringing up our children, and about how our actions shape the person that they grow up to be. As the characters are made to look at their lives under a different light, they begin to realise what’s most important in life. It’s not the illusion of money and status that keep a family together, it’s the way a family come together and support one another.

Episode One: ‘What Have They Done?’

The first episode shows us where the characters are now and how they are all handling the aftermath of Perry’s death in different ways. There are a few clips to the police investigation tapes but they don’t really reveal enough. We know that they have all told the police that Perry lost his footing and fell, but there’s obviously a lot more to it than that.

The episode doesn’t give us enough detail about the aftermath to entice us properly, as I wanted to be shocked like I was at the end of season one, but what it does do is remind us of what a high-quality series this is. With beautiful locations and cinematography alongside a soothing indie playlist, it looks phenomenal. And with all of these amazing women in the leads, now with additional Streep, each giving a strong performance, the first episode reminds us of why this a series worth keeping up with. I just wanted to know more about where it is going.

With even more amazing performances and a brilliantly written script, many things are revealed in this second episode as multiple lies start to boil over, showing us the importance of telling the truth whilst these characters are all sitting on a big lie.

In this episode, we start to see the effect of this lie throughout the generations, as children gossip and mothers probe, as relationships are pushed in all kinds of directions – some further together, some completely apart, whilst others are starting to cause some conflict.

But it’s easy to forget about the men in the series when there are so many powerful female leads, yet it is Adam Scott and James Tupper who stand out in this episode, for me. As they are both trying to get inside the heads of their wives, you can see the emotion in their hands shaking and their voices trembling, which is what really makes the impact of these women’s lie hit hard.

My only problem with The Montgomery Five is that I don’t see Laura Dern’s part in it. She is a great actress, but I don’t understand why it is her performance that has been gaining the most recognition and winning the awards, when every other female character has so much more impact. At the minute, I feel like she’s not really a part of the group, especially this season as she’s the only character who’s really moving forward with a new storyline, whilst the others are still dealing with their pasts. I am enjoying her character, but I just don’t see her connection well enough with the others at the minute.

This episode proves that this season is very much about the children and how they have been raised, about the mother figures they have compared to the role models their mothers think they have set. As we see how Renata’s actions are affecting her daughter, who thinks the world is ending not because of climate change as Renata would like to think, but because of how Renata makes every tiny thing seem like it has a huge impact on everything, it’s becoming quickly more apparent that these women need to start reevaluating their lives. This lie seems to have given them all a much-needed reality check as they are all starting to realise that the power they thought they once had might not be all it was.

As we see both Celeste and Madeline in therapy, as well, there’s a really emotional moment from Madeline, probably the closest we have got to her so far, whilst Jane is letting Corey in as she also tries to open up. Bonnie seems to be getting better, too, but Mary Louise is digging deeper. Is she set out to find the truth still? Or is she starting to realise who her son really was?

So far in this season, there’s been a focus on the main characters and on their children, but this week’s episode was all about the grandparents. Mary Louise is becoming more and more of a threat and it’s obvious that she has no boundaries, probing Celeste and moving into Jane’s apartment block to get as much control as she can. She’s emotionless and cruel and is obviously the character stirring this season in whatever direction it’s going to take.

Meanwhile, Bonnie’s mother, Elizabeth, has a stroke due to the pressures of trying to figure out what’s wrong with her daughter. Or is something more going on here? Whatever is to be revealed, Bonnie is an incredibly self-aware person, so she’s undoubtedly going to be weighing up all of these emotions in her mind.

This episode is also about the hardships of marriage. As Renata says, “They betray us and we stay, you know. They lie, they cheat on us, and…we stay.” But will Ed stay? Will he forgive Madeline? I really hope so.

And as Jane opens up to Corey, is he as sweet as he seems? Or is he a liar and merely trying to find out the truth about the night of? I’m still not sure what’s going on here, but his character is definitely going to be used as a plot device in some way soon.

Also, that putdown by Madeline’s daughter about being unhinged was a real winner.

But whilst all of this build-up to whatever happening is deeply developed and full of context, I’m still waiting for something more. I thought this series was going to be an investigation into Perry’s death, seeing these women be interrogated for their actions. But whilst we’ve had glimpses of this, it hasn’t been enough. “Everything feels like it’s unravelling,” Renata tells Madeline. Let’s hope that it is.

You can finally see the story coming together with this episode. As Mary Louise threatens to take Celeste to court over custody of her children, it’s likely that the truth about the death of Celeste’s husband will come out. Maybe this is where the real trouble will start as it’s been quite smooth sailing so far, but something definitely needs to pick up the tension here.

Leaving us on a number of cliffhangers, things definitely seem to be going somewhere now, so hopefully next week’s episodes can finally start setting things out more clearly.

Things step up with this episode as Celeste is put on trial and made to admit to all of her wrongdoings. Her life is laid bare as Bonnie also confesses everything to her mother and we finally get to know her character more deeply.

Everything is out there now, everything but the lie. Do they all need to be free of that one, too? Is Bonnie going to tell the police? Has she come to justice with her actions and motives but now needs to reveal everything she has begun to understand about herself and her life?

As Renata also finds out that Gordon has been paying their nanny for sex, I can’t wait for her to finally flip and give him some much-needed payback. I still don’t understand her part in The Montgomery Five, but she has sure been an entertaining character this season.

With the start of this final episode, we finally get to see a few flashbacks to the night of the incident, albeit only very briefly, but everything is brought to a satisfying conclusion.

Every story is rounded-up brilliantly with a very emotional finale as we see these powerful women come together one last time. Their powerful solidary is proven once more after they have all come to terms with the consequences of their lies and have started to get their lives back on track a little. But there’s still one thing holding them all back.

They all seem to have learnt something about themselves during this season, during the process of keeping a secret and seeing how it has affected those around them. As the season ends, the characters all come to realise that successful relationships are about honesty, communication, and trust, and that is what leads them all now.