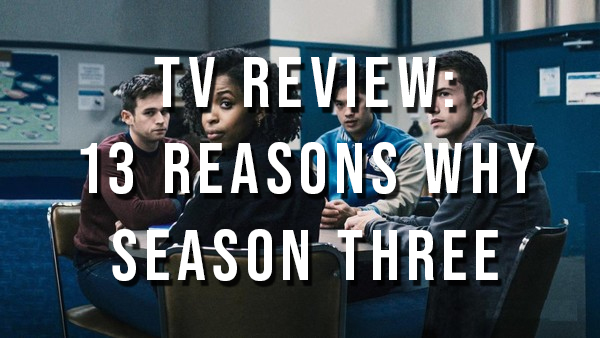 13 Reasons Why is a series we’ve all been watching, whether we refused to go beyond the first season or we’ve stuck by it to see where it would it go. Nobody asked for season two, but it rounded up the story quite nicely with Bryce being given a trial into the rape of Hannah Baker.

We definitely didn’t ask for season three, either. But whilst they’ve made the story work and have ensured that there’s something substantial to develop into a whole season, the writers also seem to have forgotten about their character’s standpoints, forgetting about everything that was integral to the series as a whole.

It’s the exploration of this issue that is what’s best about this season. Characters such as Jessica, as well as other victims of sexual abuse, are seen trying to rebuild themselves, trying to not let their pasts define them. And it’s great that this season has allowed time for us to see this development, to not just end on these characters remaining victims, but to see them come out on the other side.

The issue on a whole doesn’t have the message that it intends, but the individual stories definitely hit hard. And it it is Tyler’s story that really stands out, with his courage to stand up making more noise than any of the OH’s activist activities. Yes, he is encouraged to talk about his experiences by Jessica’s growing confidence, but her story seems to get lost in the rest of her actions. Tyler’s, however, will bring you tears.

It is Tyler’s story that you will feel pride in, it is Tyler’s strength that you will relate to, and it is Tyler’s courage that would encourage you to stand up alongside him. That’s because he’s the only one who seems to have learnt anything in this season. The rest of the characters are still making mistakes and making up excuses for themselves, whereas Tyler really makes something out of himself.

None of the other characters seem to learn a lot throughout this season. Even by the last episode, Alex is asking for a gun and Justin is taking drugs. Where is the resolution for these issues? There is so much that is washed over, that it’s almost unforgivable how this season deals with – or misdeals with – many of its other issues.

One of my main problems with this season is how it tries to show the softer side of Monty (Timothy Granaderos) and Bryce. Of course they are still human and they have things going on in their lives that make them act the way they do, and it’s good that this season is showing both sides of their characters rather than just painting them as monsters. But then, is this what we want to see?

As this third season attempts to show how Bryce wants to become better after admitting to his crimes and the reasons for why Monty takes his anger out on others, does this really justify their actions? Too many times I found myself liking Monty and feeling sorry for him before remembering what horrific thing he did in season two.

But maybe that’s what this season is really trying to question. What does it take for somebody to prove their redemption? Is it even possible? Yet even despite Bryce’s final message to Jessica, his and Monty’s actions certainly do not prove that their actions can be redeemed, as they are still bad people for the most part, still treating others badly despite confessing to their wrongdoings and trying to change. It all just seems off balance and I really don’t think this was handled well at all.

My other problem with this season is that the writing – or at least the way that the story is developed – feels quite lazy. Without relying on Hannah’s tapes or a courtroom, this time, the season adds a new character to tell the story for them.

As Clay and Ani take prominence in this series, trying to find out what really happened to Bryce, Ani’s smugness at the centre of it all is merely used as a plot device. And it’s by no fault of Grace Saif as she gives a good performance, but there are definitely better ways that the writers could have gone about telling this story without relying on her narrative, and without having to include a new character who we aren’t given time to decide whether we like or not.

Instead, we are made to believe that the police would have just sat there and listened to Ani’s explanation of the whole story, detailing why it could have been anyone that killed Bryce before telling them, apparently, who actually did it. I find it impossible to believe that anyone would have given her the time of day that she was given; not when she questions Clay’s friends, and not when she takes things into her own hands with the police.

And for a new character, why should we even trust her? Clay has made a point of not dropping anyone else in it to prove his innocence because he is loyal, yet she easily gives the police everybody’s truth or lie, or even just the parts that she wants them to know, to what purpose? Instead of appearing as a heroine stepping in to help her new friends out, she just comes across as a smartass.

As for the ending of this season, it really doesn’t justify itself in its conclusions. The whole point of the series has been about truth-telling, about being honest to yourself and your friends, and about having the guts to stand up for who you truly are. Yet everything about this third season seems to overwrite this.

The only message I get from this third season is that it’s okay to do bad things if you have a good enough reason to. Even Ani asks, “Would it have been right for [name] to go to jail?” Well, yes, because they actually did it, with a good reason to or not. So yes, that would have been the only right way for this to end.

Sure, I would like to think that I would lie for my friends to get them out of trouble, but shoving somebody else under the bus definitely is not the right way to go about it, as much as these characters try to convince themselves that they have done the right thing. As sincere as the season tries to make their reasonings, all these characters have done is save themselves. It’s a completely selfish act that makes the messages of the first two seasons seem redundant, and there’s something unnerving in the confidence that these characters come away with.

At least Winston ends the season on some truth. Part of me wants another season for him to make the other characters realise what they’ve done wrong and to bring some morals back into the story, but I also hope that they don’t take this series any further so that we can remember the good and not taint it any more.