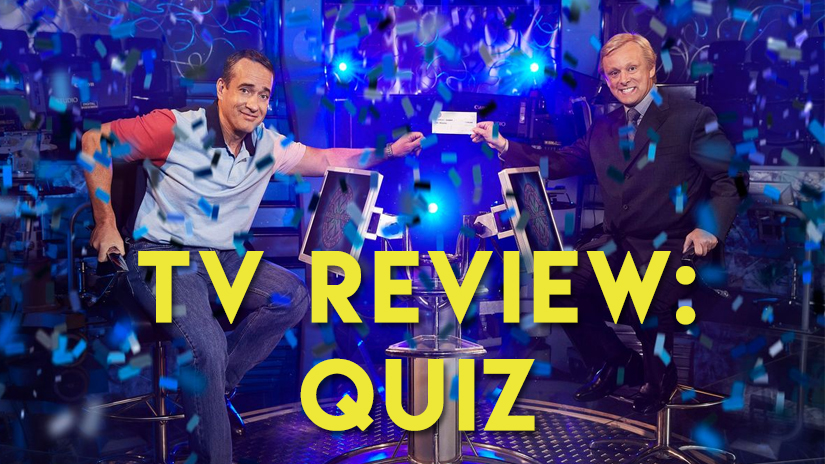 A three-part drama which aired on ITV in April 2020, Quiz tells the story of Charles Ingram (Matthew Macfadyen), a former British army major, who won the jackpot on the quiz show, ‘Who Wants To Be A Millionaire?‘, hosted by Chris Tarrant (Michael Sheen). Written by James Graham, and is based on his play, Quiz, and the book Bad Show: the Quiz, the Cough, the Millionaire Major by Bob Woffinden and James Plaskett, what followed was a criminal trial in which he and his wife (Sian Clifford) were convicted of cheating their way to success.

The story of Charles Ingram and the suspicious cough is a story that many of us will remember. And before watching this dramatisation of the event, I was convinced that he had cheated. This series might have just convinced me otherwise, though.

Quiz is a darkly funny and sharp retelling of an unbelievable but very British crime that has so much more to it than you would have initially thought. The faces of Charles and Diane Ingram are etched into our brains, as the series works as an investigation into how they could have got away with this crime, ultimately leaving up to the viewers to decide if we think that they were capable of getting away with it or not.

It’s great to see ITV take on a story that involves their own executives and producers, and they manage to provide a balanced case for both sides, even if that means them admitted that they did a lot wrong, too. However, I didn’t particularly like how the series was constructed because, with the Ingrams still maintaining that they are innocent, it was difficult to know what parts of the series were fact and which characters we should be believing.

Michael Sheen appears to be able to shapeshift into any character role he lands. As Chris Tarrant, he gives a perfect performance and gets the accent spot on. But Matthew Macfadyen and Sian Clifford are equally as impressive as the Ingrams. They both get the real-life couple’s expressions and mannerisms spot on, showing an intelligent but naive side to their personalities, but also hinting at a more cunning and sly side to them.

I also loved strong>Helen McCrory’s performance as Sonia Woodley QC. If I were a juror on that trial, I would have undoubtedly voted not-guilty because of her clever approach to the defence, yet I still can’t help but feel that I’ve been conned into thinking that they didn’t do anything underhanded.