“The sound of the scream rings in the air after it has finished, like a struck glass. The guests are frozen in its wake. They are looking, all of them, out of the marquee and into the roaring darkness from where it came. The lights flicker, threatening another blackout”

Written by Lucy Foley and published in 2020, The Guest List is set on a remote island off the Irish coast, the venue for the wedding of the year. But this is one guest list no one would want to be on. As family and friends assemble, the lives and secrets of the principal characters are unravelled to reveal that each has a reason to want one of the party members dead. When the lights go out and one of them is found murdered, which one of them has been pushed to their limit?

Rich in detail in both setting and character development, The Guest List is a tense, atmospheric, and engaging thriller that’s slow-burn will leave you open-mouthed in shock. Like the guests, you are completely left in the dark until the book’s explosive ending. There’s no guessing who’s done it this time; first, you have to guess who’s body has been found. Is it a murder committed out of vengeance? Or has somebody succeeded in keeping their secret in their past? There are so many twists in this exhilarating thriller that it is certainly one that will be hard to top this year.

Told in short chapters through four alternating narrations – The Bride, The Bridesmaid, The Plus One, and The Best Man – the story comes together through lavish character descriptions and in-depth details that lead up to the event of the big day. I don’t normally like reading a book with too many points of view, but Foley uses this narrative technique impeccably well. Every narrator stands out on their own, so there’s no confusion over who said what or in regards to their interlinking relationships with the other guests.

And because it’s not about guessing who’s behind the murder, Foley, instead, gives so much attention to her characters and their pasts that you feel a personal connection to them all. Jules is high-maintenance but you come to understand her resentment, you know there’s something behind Will’s controlled front but you feel his seductive persona just like everybody else, Olivia is fragile and you can feel every ounce of her pain, Hannah is in a bit of a rut and looking forward to feeling like her old self again (which I related to most of all), and you even begin to feel for Johnno who is trying to prove that he’s not just Will’s less handsome, intelligent and rich sidekick. Getting to like each character (or dislike, in some cases) also means that you become more and more invested in how it’s all going to end as your intrigue constantly grows stronger.

I recently read And Then There Were None, Agatha Christie’s classic thriller that is also set on a remote island, so this definitely has a similar feel to it. But what’s so strikingly different about the two styles of storytelling is that Foley doesn’t reveal who has actually died until near the end. This isn’t a simple whodunnit as it’s impossible to guess who the murderer is when you don’t know who the victim is. And there are plenty of options for both. I made a wild guess halfway through and was almost right, but there are still so many other twists and revelations that I hadn’t even thought about, that the final third of the book completely takes you by surprise.

While I was a little frustrated at the start of the book because you really don’t know what’s going on in the present, the final third of the book is so tense that I ended up loving having so much come together in a short amount of time. However, with there being so many possible culprits and motives, as each narrator ends up having a reason to be driven to murder but also for somebody else to want to shut them up, we are given so much build-up to each character that there isn’t enough time for all of their stories to be rounded up. While one story is concluded well with the revelation of who the murderer is and of their motive, the other characters have their endings rushed, so I do wish that there was a little more time spent on giving them closure.

Aside from that, The Guest List is a refreshing and invigorating journey to take, and I look forward to reading more by Lucy Foley, who obviously knows how to handle the genre in an original and exciting way. 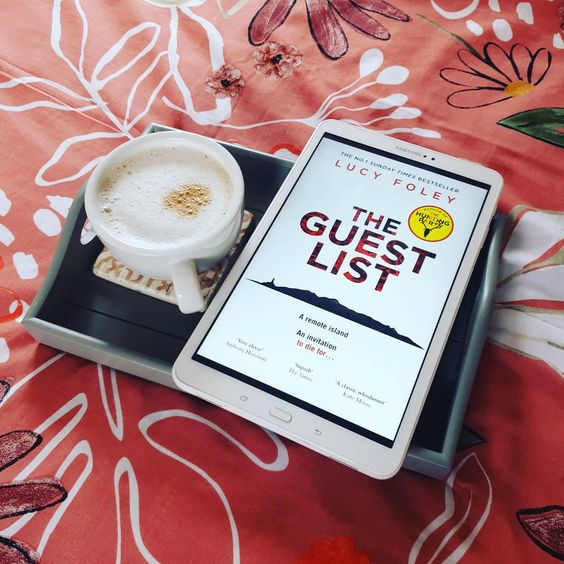