“Most people could be persuaded to listen to reason if they didn’t actually feel that strongly about a topic. But once their opinion became entangled with their sense of self, logic went straight out the window.”

Set to be released next month, Her Final Words is the fifth release from Brianna Labuskes, the first to follow FBI special agent Lucy Thorne. For what seems like an open-and-shut case when Eliza Cook walks into the field office and confesses to murdering a young boy, Lucy isn’t quite so ready to accept that that’s all there is to it. Eliza reveals chilling details that only the killer could know. Beyond that, she doesn’t say another word, leaving a vital question met with dead silence: Why did she do it? To find the answer, Lucy goes to the scene of the crime in the small Idaho town of Knox Hollow. But Lucy’s questions are only mounting. Especially when she’s drawn deeper into the life of the victim. Then a combing of the woods yields unsettling evidence that Eliza isn’t the only one in this close-knit rural community with secrets.

This is my Amazon First Reads selection for July 2020.

With a great premise that led me to choose this book for my Amazon First Reads selection this month, there are some really interesting concepts used in Labuskes detective thriller. Welcoming us into a small town with its own rules and a religious group that seem more like a cult, your curiosity instantly grows, just like it does for FBI special agent Lucy Thorne.

Having a girl admit to a murder and then remain mute at the beginning of the story is a really intriguing plot device. But using such a mechanism so early also means that you’re constantly on the lookout to see whether it makes any sense in the bigger picture, or if it has merely been used to create some suspension early on. And I’m sad to say that I don’t think the justifications for Eliza’s actions were enough, with the plot device only working to drag the story out. Labuskes ties up all of her loose ends and makes an effort to explain Eliza’s reasoning at the end, but it just didn’t fill that gap for me.

I liked the lead character of Lucy, but I did hope to get to know her a little more personally. At the start of the book, Lucy’s boss says, “You have to promise—don’t get sucked in, Lucy. I mean it. Obsessions get people killed.” Maybe the comment was just to link to the obsessions involved in the case, but I thought we were going to find out something about Lucy’s past, something that happened to her that drives her ambition and interest in certain cases. But we didn’t get to know anything about her outside of this crime, so I couldn’t relate to her as well as I wanted to. The synopsis says that “Getting to the truth is becoming Lucy’s obsession”, but I didn’t feel that, either. She’s good at her job, but I didn’t get the impression that this case meant a lot to her, especially when no personal connections were made.

Seeing the story mostly from her point of view as she tries to figure everything out, we really get to understand what’s going on in her head. But this also became a little repetitive at times. There are a couple of main things that she needs answers to: “Why confess to a crime you didn’t commit?”, “A motive would be nice.”, and “Connections. Which ones were important?”. These prases are often repeated throughout the story as Lucy tries to get things to make sense in her head, but I found this repetition a little tedious; I just wanted her to get on with it.

Her Final Words is a good mystery and it definitely kept me guessing. I especially liked the reveal of why the culprit was committing these crimes which I thought was a really unique approach. But I wasn’t gripped by the investigation; I wasn’t eager to find out what was going on. It wasn’t that I grew bored, just impatient, as the writing constantly goes the long way around. Lucy constantly questions what things mean. Is it this? Is it that? Could it be something else? Why would it be that when there’s no reason for it to be? There’s a lot of back and forth in her thought process, and I quickly became bored by her lack of self-belief. There’s also a lot of fragmented dialogue: “Why?” / “Why what?” he asked. / “Why did you think it was interesting?” If Labuskes’ narrative was more to the point and the dialogue was tighter, I would have had a lot more interest in finding out the answers.

There’s a lot I like about this book. Labuskes is a good writer and I really like her ideas. I just struggled to get through her attempt to make the story longer than what was necessary. If it were more concise, possibly even a little more hard-hitting and threatening since it has such a dark setting already, I would have really loved it. 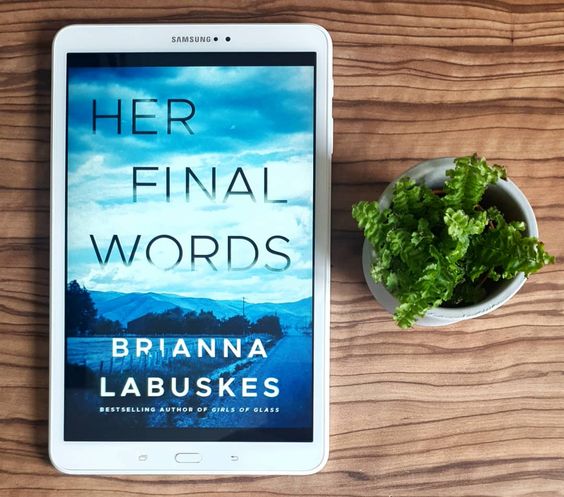