“We’re the police, that’s our job. We’re not judge and jury. And we’re certainly not executioner.”

Due to be released on 8th September, Close To The Bone is the second book in the Detective Megan Thomas series by Susan Wilkins. The story follows Detective Megan Thomas who hoped that moving to Devon would mean a quiet life, but when her sister Debbie finds the body of local businessman Greg Porter, that peace is shattered. Her boss won’t allow her anywhere near the case, leaving Megan on the sidelines. Caught between the job she loves and what she feels she must do, Megan finds herself faced with an impossible decision. She’s desperate to save her sister, but what if Debbie is lying about her involvement? When a second body and a surprise confession takes the case into even muddier waters, Megan must decide where her loyalty lies – with her family, or the truth.

Some thrillers pull you in emotionally with a crime relating to people, relationships, and betrayals, while others are about police corruption and criminal enterprises which pull you in with intricate details. Close To The Bone is a bit of both, but it’s mostly the latter.

It’s much bleaker in tone than most thrillers I’ve read recently with its focus on money laundering, people trafficking and organised crime. While there are elements of an unresolved mystery and character’s going through psychological torment, it’s not a crime drama that you will feel emotionally attached to. Instead, it’s an in-depth investigation that feels painfully relevant to many of today’s issues.

Keeping you engaged with a quick pace and tight plot, the book follows two stories which link together well. But I wouldn’t describe it as “edge of your seat suspense” as the cover suggests. It’s much more sophisticated than that. You can tell that Susan Wilkins is an experienced writer as she doesn’t bother with over-used thriller tropes. The suspense here is in the intelligently-researched police procedural process and the disappointment in how hard the story hits home.

Although the story isn’t particularly tense and lacks a bit of action at times, what gets under your nails is how true-to-life it feels. There are too many cases like this on the news at the minute where the human aspect is lost or forgotten, so it’s the rawness of the case that Megan is investigating that keeps you so interested.

But the trouble with a story like this is that you can’t sympathise with any of the characters because too few of them have good intentions. While there are many strong characters, it’s difficult to feel drawn to any of the people under investigation because they are all selfish and money-driven. The members of the Devon & Cornwall Police team are described well, but this second book does still feel like an introduction to most of them so it’s difficult to find someone to root for.

Megan herself, however, is really likeable. I love her straight-talking and no-nonsense approach. She’s a very relatable character who is undeniably good at her job. But her troubled past has obviously made her close up, so I feel like we’re only scratching on the surface with her character and that there’s a lot more to discover about her.

Although this is the second book it the series, it works incredibly well as a standalone book. It rounds up Megan’s past and current circumstances well and the connections are easy to follow. I didn’t feel like I was missing out on anything regarding any of the relationships, but I did want to know more about some of the characters in the closing chapters.

I enjoyed the slight hint of romance, which felt more like a mutual need to feel connected to someone than anything too romanticised, but I wanted just one more scene between Megan and Danny at the end. You could see that she is a very lonely person and that trusting somebody else was a big step for her to take, so I wanted Wilkins to leave things on a bit more of high with a hint at where their relationship will be going in a possible future instalment.

Most of all, I wanted to see inside Jim’s mindset a little more. He was obviously troubled and filled with anger, and there was obviously a balance being staged as to whether we should feel sorry for him because of his illness or dislike him because of his brutish actions and attitude. But I needed to see more of the torment going on in his mind to better understand his resentment of life. In the end, I just found him unlikeable which didn’t make me care about his actions enough.

Overall, Close To The Bone is a really well written and developed police investigation and I did really enjoy reading it, but I just wasn’t excited enough by it to give it a higher rating. Still, I’m intrigued by Megan and am certainly interested in reading the first book in the series to feel better connected to these characters. 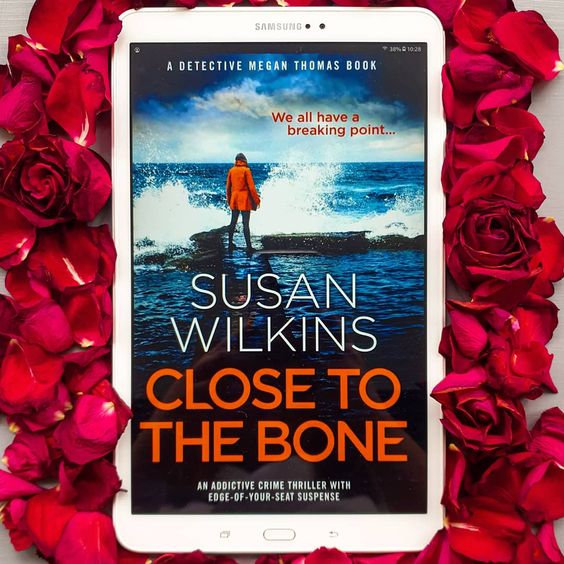