“I guess we’re almost friends now, or as friendly as you can get when you’re not one hundred percent sure the other person isn’t framing you for murder.”

Published in 2017, One Of Us Is Lying is written by Karen M. McManus and follows five students at Bayview High walk into detention: Bronwyn, the brain, is Yale-bound and never breaks a rule; Addy, the beauty, is the picture-perfect homecoming princess; Nate, the criminal, is already on probation for dealing; Cooper, the athlete, is the all-star baseball pitcher; and Simon, the outcast, is the creator of Bayview High’s notorious gossip app. Only, Simon never makes it out of the classroom.

Before the end of detention, Simon’s dead. And according to investi­gators, his death wasn’t an accident. On Thursday, he died. But on Friday, he’d planned to post juicy reveals about all four of his high-profile classmates, which makes all four of them suspects in his murder. Or are they just the perfect patsies for a killer who’s still on the loose? Everyone has secrets, right? What really matters is how far you would go to protect them.

When I first joined #Bookstagram a few months ago, this was one of the first books that I added to my wishlist. It’s a book/series that everybody seems to have on their shelf, so I thought it was about time I found out why.

One Of Us Is Lying is an easy but wholly enjoyable read with a great mystery at the centre of the story. It kept me guessing throughout and was paced well enough to keep me excited to find out more. The final reveals certainly came as a surprise, and I came away from the story feeling really at home with its characters.

Inspired by the classic The Breakfast Club combined with a more modern Gossip Girl/Pretty Little Liars edge, this is a young adult book that will appeal to quite a large audience. I’m a bit hit and miss with young adult fiction at the minute as I’m 29 years old now, so sometimes YA books can make me feel old (or just, you know, a little pervy). But I didn’t feel any of that with this book.

Although the characters are at high school and are dealing with issues of that age – the pressure of maintaining your reputation at school and trying to fit in, finding out who you are and accepting yourself for who you are, as well as the stresses of living with your parents and the heavy or lack of support they provide – none of their coming of age issues felt aimed primarily at a younger readership.

The characters are all likeable and friendly, so it’s easy to warm to them. They don’t act immaturely or irresponsibly, and they are a much more accepting group of teenagers than if this book were written ten years ago, so it’s easy to engage with them, no matter what you’re age. If I had read this in my teens, I know that I would have been swooning over a certain relationship, too, and it did give me a few butterflies even now.

One Of Us Is Lying can easily be read in a couple of sittings, so if you have this book on your shelf and have been putting it off, or you’re in a bit of a slump and need something to lift you out, then pick it up this book and revel in its simple likeability. 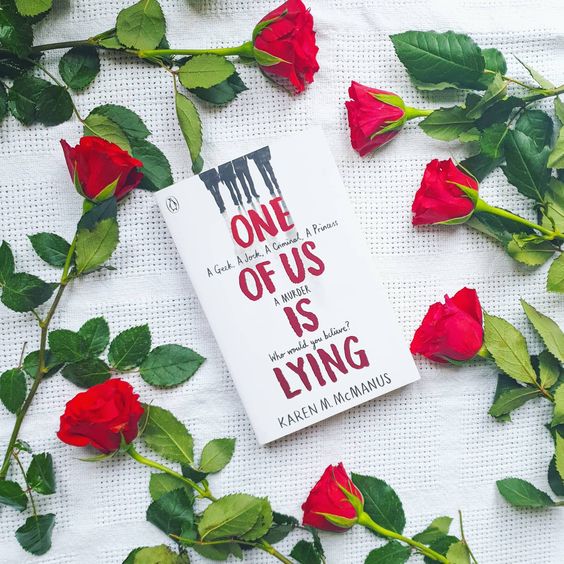 3 thoughts on “Book Review: One Of Us Is Lying by Karen M. McManus”