Set to be released in paperback on 29th October, The Split by Sharon Bolton follows Felicity Lloyd who has desperately signed up for an extended research trip working on the remote island of South Georgia. It was her only way to escape. But now Freddie Lloyd is coming for her. He has just got out of prison for murder and is on his way to where Felicity is hiding. And this time, he won’t stop until he finds her. No matter how far you run, some secrets will always catch up with you…

Thankyou to Orion Books and Target for a free advance copy of this book in exchange for an honest review.

There’s no doubting that Sharon Bolton’s latest will receive a lot of praise. And it’s well deserved. The Split is an unpredictable and fast-paced thriller that is sure to leave you with palpitations. But my feelings towards it are very much split.

Beginning in the desolate and ice-capped South Georgia, Bolton details her Nordic setting brilliantly. I’ve seen sliding glaciers in real life and the book perfectly captures the sharp-white landscape that bleeds hues of electric blues, and I could almost feel the frost on my fingertips from the opening chapters.

But what starts as a classic chase thriller in a unique setting is abruptly interrupted when the story goes back nine months in time. Obviously this was needed as we’re eager for answers, but I would have liked more time to get to know Felicity. I was just starting to like her when the book shifted back in time, where she has so much going on that I didn’t know whether to trust her not.

I think I would have preferred it if the chapters were interlinked so that part of the story remained in South Georgia, as the middle section is so farfetched at times that I couldn’t completely engage with her character.

It’s certainly a complex thriller and there are a lot of “WTF?” moments. Some of the twists are impressive, but most are too unconvincing, building up to so much that needs answering that the story starts to feel a little heavy. But to Bolton’s credit, she answers every question we’re left with and the final moments are full of suspense. I had guessed some of what was going on, but there’s so much going on in the story that I was still left surprised.

Although it was a little too extreme for me at times, The Split is still an easy-to-read and enjoyable thriller that showcases Bolton as a great writer. 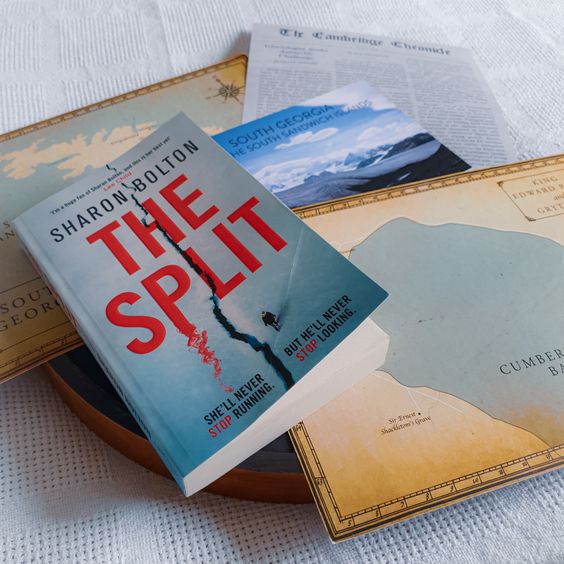 A year ago Felicity Lloyd fled England to South Georgia, one of the most remote islands in the world, escaping her past and the man she once loved. Can she keep running her whole life?

Freddie Lloyd has served time for murder – and now he wants her back. Wherever she is, he won’t stop until he finds her. Will he be able to track her to the ends of the earth?

TOGETHER THEY’LL FIND THEMSELVES TRAPPED ON THE ICE AND IN DANGER. WHO WILL SURVIVE?

Sharon (formerly S J) Bolton grew up in a cotton-mill town in Lancashire and had an eclectic early career in marketing and public relations. She gave it up in 2000 to become a mother and a writer. Her first novel, Sacrifice, was voted Best New Read by Amazon.uk, whilst her second, Awakening, won the 2010 Mary Higgins Clark Award (part of the prestigious Edgars) in the US. She has been shortlisted for the CWA Gold Dagger, the Theakston’s Prize for Best Thriller, the International Thriller Writers’ Best First Novel award, the Prix Du Polar in France and the Martin Beck award in Sweden.

2 thoughts on “Book Review: The Split by Sharon Bolton”