“In a solitary life, there are rare moments when another soul dips near yours, as stars once a year brush the earth. Such a constellation was he to me.”

Originally published in 2018 and written by Madeline Miller, Circe follows the daughter of Helios, God of the sun and mightiest of the Titans. But Circe is a strange child. She’s not powerful like her father, nor viciously alluring like her mother. Turning to the world of mortals for companionship, she discovers that she does possess power: the power of witchcraft. She can transform rivals into monsters and menace the Gods themselves. Threatened, Zeus banishes her to a deserted island where she finds herself pitted against one of the most terrifying and vengeful of the Olympians. To protect what she loves most, Circe must summon all her strength and choose, once and for all, whether she belongs with the gods she is born from, or the mortals she has come to love.

A beautifully written and character-driven retelling, Circe is a captivating story of womanhood that gives a distinctive voice to one of Greek mythology’s underrated heroines. With lush descriptions and a strong lead character, it’s a complex but breathtaking story that I won’t be forgetting any time soon.

As a story of Greek mythology, it has everything you want from it: adventure, monsters, betrayals and magic. There are even a few twists with how the story of the fates weaves into the plot which I loved, as well as the mention of some of the most famous figures in all of mythology, including the Minotaur, Daedalus and his doomed son Icarus, the murderous Medea, and Odysseus.

Most of all, it’s a powerful story of determination and will, with so many important messages around feminism and motherhood that are just as important today. I especially loved the narrative around motherhood, brilliantly describing the emotional journey from the difficult first few weeks to the heartache of them leaving the nest.

“But perhaps no parent can truly see their child. When we look we see only the mirror of our own faults.”

It’s also a fantastic story of witches. Of course there were stories of witches before Circe, but this really felt like an origin of the modern-day stereotype; the reason why we think of witches as unappealing, hostile, and solitary.

Madeline Miller does a wonderful job of making this story unique, accessible and engaging. Circe may be a Goddess, but she has so many human characteristics. She’s flawed in beauty, powers, and relationships, but she knows her place in the world and what she desires, and is determined to come into her own to prove others of her worth.

Circe is such a relatable character that she is fully deserving of her own story and I loved every second of it. I will definitely be reading more by Madeline Miller in the near future.

I read this book alongside the audiobook by Audible Studios for Bloomsbury which is narrated by Perdita Weeks and it is one of the best audiobooks I have listened to. Perdita voices Circe’s character beautifully and the narration helped with the difficult Greek names which sometimes interrupt my reading of Greek mythology. This made it much easier to follow and therefore enjoy, which I could do easily a more fluid narrative. I thoroughly recommend the audiobook if you’re interested in reading this but are worried that it may be too complex/out of your comfort zone. 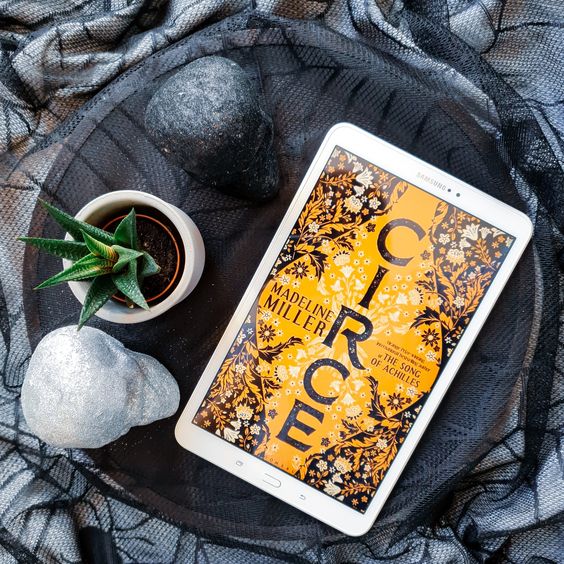