“500 years ago: eight martyrs were burnt to death. 30 years ago: two teenagers vanished without trace. Two months ago: the vicar committed suicide.”

Set to be released on 21st January, The Burning Girls by CJ Tudor follows the new Reverand of Chapel Croft, Jack Brooks, and her teenage daughter Flo, who are hoping to make a fresh start with a new job and a new home. But, as Jack knows, the past isn’t easily forgotten. And in a close-knit community where the residents seem as proud as they are haunted by Chapel Croft’s history, Jack must tread carefully. Ancient superstitions as well as a mistrust of outsiders will be hard to overcome. Yet right away, Jack has more frightening concerns. Why is Flo plagued by visions of burning girls? Who’s sending them sinister, threatening messages? And why did no one mention that the last vicar killed himself? Chapel Croft’s secrets lie deep and dark as the tomb. Jack wouldn’t touch them if not for Flo – anything to protect Flo. But the past is catching up with Chapel Croft – and with Jack. For old ghosts with scores to settle will never rest…

A nail-biting psychological thriller, The Burning Girls had me reading up until the early hours of the morning. Partly because I was too scared to turn off the light, but mostly because I could not put it down.

Brilliantly written with enjoyable characters who have a great sense of humour, the book has a slightly slow start but it soon grips you in every way possible. With a fast pace and many satisfying twists, it’s a book that keeps giving and giving. It had my heart racing from start to finish and doesn’t slow down to allow you to catch your breath.

Creepy and sinister with a hint of the paranormal, it’s also an incredibly haunting read. I was genuinely scared when reading this book and would certainly consider it more of a horror than a thriller. Tudor sets the mood perfectly, detailing a richly atmospheric setting alongside a brilliantly developed thriller that is sure to have a lasting effect.

This was the first book that I have read by CJ Tudor, although I have a few others on my kindle that I have been eager to read, but I will definitely be getting to them soon as this five-star read has left me desperate to read more of her work. 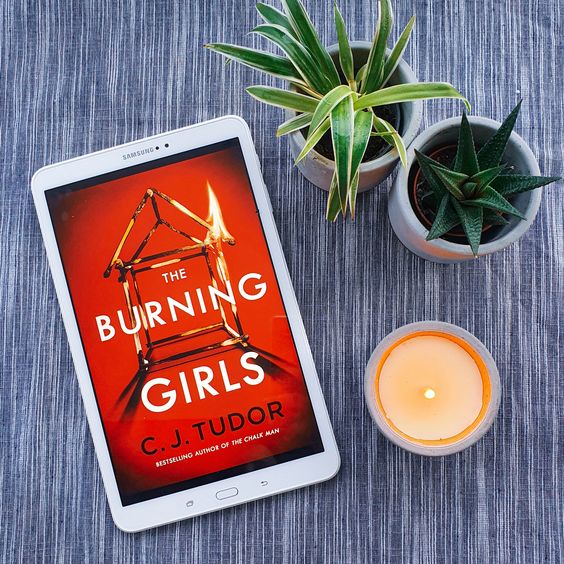 5 thoughts on “Book Review: The Burning Girls by CJ Tudor”