The 2020 book Such A Fun Age by Kiley Reid follows a young black babysitter, Emira Tucker, who is confronted while watching two-year-old Briar one night, when a security guard at their local high-end supermarket accuses Emira of kidnapping. A small crowd gathers, and a bystander films everything. Her boss, Alix Chamberlain, resolves to make it right. But Emira is aimless, broke, and wary of Alix’s desire to help. At twenty-five, she is about to lose her health insurance and has no idea what to do with her life. When the video of Emira unearths someone from Alix’s past, both women find themselves on a crash course that will upend everything they think they know about themselves, and each other.

Thank you to Tandem Collective and Kiley Reid for inviting me to join in the readalong for this book and for a free copy in exchange for an honest review.

A refreshing narrative that opens up some important topics of discussions, Such A Fun Age is an eye-opening story about the everyday domestic biases that we often don’t know we are making or witnessing and therefore justifying as acceptable behaviours.

The subject of race and privilege is incredibly relevant and something that many of us – myself included – have recently realised that we need educating more on. Not because we are ignorant or unaware of how different races are treated less favourably, but because of how our comfort of having white privilege can often blur our judgements of what is normal and acceptable.

To have this story experienced from the perspective of a POC character and told by a POC author, there is so much to appreciate about Kiley Reid’s efforts. As a debut novel, Such A Fun Age proves that Reid is a smart and brilliant writer. We need more stories and authors like this, and she is undoubtedly a voice that I want to hear more from.

I appreciate how the subject is handled, as it’s an easy read with a subtle approach. But while I loved the discussions that this book opened up with my fellow readalong buddies, the story itself lacked an impact for me. I feel like Emira was a third wheel for most of the book. The real story was between Alix and Kelley, while Emira was used as a pawn between them. While this opened up some insightful discussions around Emira’s attitude regarding how she sees this all the time and that her situation isn’t relevant in the bigger picture, I feel like she took too much of a back seat in it all. She had no opinions, her dialogue was limited, and the only time she actually did anything was because her friends told her to.

Alix’s character is interesting and the motivations behind her actions were shocking in how we see this so often but rarely think any more of it. But for me, Emira lacked any depth. I thought that this was going to be a story about Emira standing up for herself, but I came away from the book feeling like she neglected to deal with anything at all. There were so many issues brought to my attention, but the message seemed lost in the end with the lack of Emira’s reaction, both emotionally and physically.

One other problem that I had with the book is that Alix often moans about her weight and her friends shame her for putting on a few pounds after having a baby. However, it is commented that she weighs 141 pounds, which is only 10 stone. I understand that everybody can feel insecure about their weight, no matter what the number, but I’ve just seen this so many times–women characters moaning about their weight, to reveal that their size is actually a healthy one. I thought that since that book was written by an empowering female author that there would be no shame in using a more realistic weight. I was 14 stone after having my boys and even then I wasn’t too concerned. But to have a character being made to feel bad for a weight that I haven’t seen on the scales since my early teens (and one that I’m unlikely to ever see again!), it’s just disappointing.

Although I didn’t love this book, I still think it’s an important read and a book that everybody should get their hands on. It’s an especially great choice for a book club as there’s a lot to take away from the questions you will start asking yourself and others.

Such A Fun Age by Kiley Reid 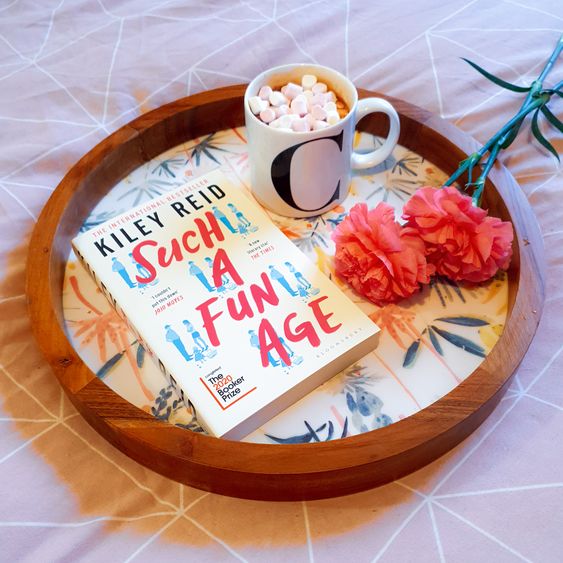