“The four winds have blown us here, people from all across the country, to the very end of this great land. And now, at last, we make our stand, fight for what we know to be right. We fight for our American dream, that it will be possible again.”

Set to be released on 2nd February, The Four Winds by Kristin Hannah is set in Texas, 1934. Millions are out of work and a drought has broken the Great Plains. Farmers are fighting to keep their land and their livelihoods. The crops are failing, the water is drying up, and dust threatens to bury them all. In this uncertain and dangerous time, Elsa Martinelli must make an agonizing choice: fight for the land she loves or go west, to California, in search of a better life.

An emotive and immersive piece of historical fiction, The Four Winds is a beautifully written but hard-hitting story that brilliantly describes a period of time when times were tough, family was everything, loss was inevitable, and good news was rare.

The Four Winds is certainly a bleak story with few light-hearted moments, so that’s something you need to be prepared for. But I think it’s important that the story is told this way. Just like the dust storms themselves, the hardships that these people faced were relentless and rarely gave up, so it was vital that Kristin Hannah put her characters through the same turmoil and grief.

Hannah does a marvellous job of transporting you to this time and place and wholly draws you into this family’s story. I learnt so much about the Great Depression and felt like I was reading first-hand accounts of those who were put through it. My eyes were constantly being opened to the suffering that they faced, but also of the resilience that remained in their hearts and souls. A tear came to my eye more than once, with the final few pages, especially, being filled with some incredibly moving lines of dialogue.

Although our current situation doesn’t nearly compare to the severe conditions of the Great Depression, there were many lines that related to the ongoing pandemic we are now facing. This one particularly stood out to me:

“As we know, there are lessons to be learned from history. Hope to be derived from hardships faced before. We’ve gone through bad times before and survived, even thrived. History has shown us the strength and durability of the human spirit, In the end, it is our idealism and our courage and our commitment to one another–what we have in common–that will save us.”

It gives hope in troubling times, a hope that Elsa never gave up on, determined to do whatever she could to save her family. Because of her strength of character, Elsa is an easy character to engage with, somebody you are desperate to survive in these tough times and to provide a better future for her children. Hannah’s portrayal of unconditional love for your family is what resonated with me the most. The powerful bond between mother and daughter is especially dominant, with the relationship between Elsa and Loreda but also between Elsa and her mother-in-law being developed beautifully.

The Four Winds is such an inspiring story and there are many quotes that struck a chord with me. Although I struggled to get through some of the sheer hopelessness of the book’s setting, there’s also a lot that I’m going to take away from it–knowledge of a different time, an open-mindedness to other people’s circumstances, and a determination to bring my two boys with an eagerness to make the world a better place. 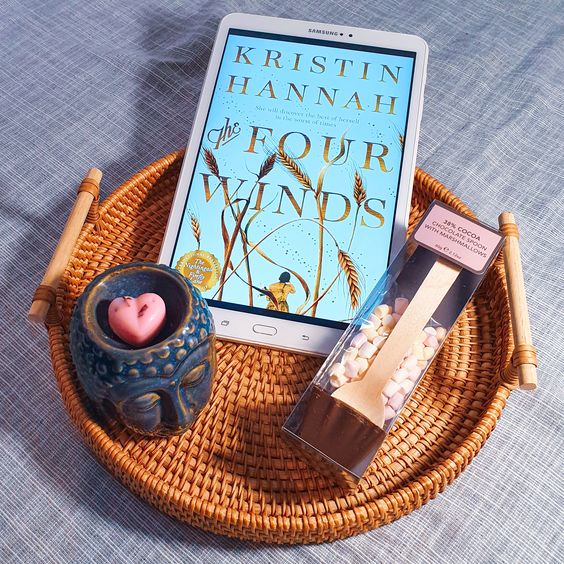 One thought on “Book Review: The Four Winds by Kristin Hannah”