“Sounds like a witch to me. How else would she know those things?”

Published in 2019, The Familiars by Stacey Halls is set in Lancashire in 1612 and follows newly-wed noblewoman Fleetwood Shuttleworth who, at the age of only 17, is with child again. None of her previous pregnancies have borne fruit, and her husband, Richard, is anxious for an heir. Then Fleetwood discovers a hidden doctor’s letter that carries a dire prediction: she will not survive another birth. By chance, she meets a midwife named Alice Grey, who promises to help her deliver a healthy baby. But Alice soon stands accused of witchcraft. Is there more to Alice than meets the eye? Fleetwood must risk everything to prove her innocence, but time is running out and both of their lives are at stake. Only they know the truth. Only they can save each other.

The Familiars is a brilliantly crafted, atmospheric and enchanting gothic story that uses real-life events and characters to explore a dark period in history that saw the mistreatment of women as they were accused of witchcraft.

I haven’t read much historical fiction until recently because I’m always worried that there will be too much historical detail to keep me engaged. But I was completely gripped with this book and found myself easily reading 100 pages in each sitting and eager to carry on.

Halls paints the setting of her story perfectly. The history doesn’t feel heavy, but it brilliantly details how women were being used and taken advantage of in this era, showing how Fleetwood is used by her parents, husband, and high-society friends as a young and fertile woman, while also setting her story against the backdrop of the real Pendle Hill Witch Trials of 1612.

Using this real historical event and actual historical figures, Halls brilliantly constructs history around her fictional story to show how these often poor and illiterate women were accused of witchcraft, merely so that King James–amongst other men-could assert his power.

While there was a lot that I loved about this book, I was expecting something more witchy. But as we know, those accused of witchcraft didn’t have any powers at all; they merely lacked a voice to defend themselves. Instead, The Familiars is a story about how we can judge others and preconceive our own ideas from fragments of information. But all the while, you will be making your own judgements about these characters with your theories on how the story is going to progress. And oh how wrong I was about pretty much everything!

As a debut book, The Familiars is more than impressive. Halls is a beautiful writer and skillfully uses history to enhance her story and to discuss the injustices against women in the 17th century in an immensely engaging way. I’m already looking forward to reading The Foundling next. 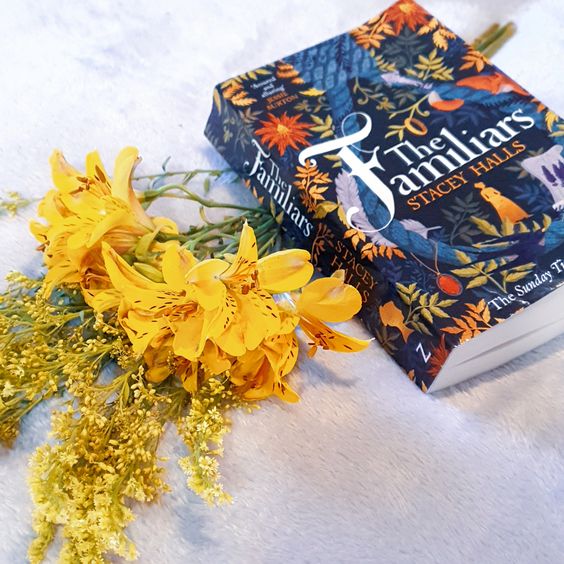