“The rumors were fed well, and grew fat and solid. They sprouted legs and heads, and they never died.”

Originally published in 2017, The Dry by Jane Harper follows Federal Police investigator Aaron Falk who reluctantly returns to home to the small Australian town of Kiewarra, a farming community in the grip of the worst drought in a century. Falk is loath to face the townsfolk who turned their backs on him twenty years earlier, but must make his way back to attend the funeral of his childhood friend, who has been shot along with his wife and child. Forced to probe deeper into the deaths of the Hadler family, Luke’s death threatens to bring to the surface a secret that Falk and Luke Hadler shared. A secret Falk thought was long buried.

The Dry is a beautifully written and tantalising mystery that oozes with ambience. You can feel the dry heat and rough wind on your skin, and hear the critters presiding over a small town that’s been silenced by drought and murder.

Slow-burning and brilliantly developed, there are no big twists and turns to take away from the emotions that plague this tight-knit community. Because Harper doesn’t need them. The intensity comes from her brilliantly crafted characters and the deeply hidden secrets that are bubbling to the surface.

Harper is truly the queen of atmosphere. She paints her characters and setting so beautifully that I really felt like I was there, investigating the crime alongside Falk. This is heightened even more by the impressive way that the narrative unfolds. The past and the present are gradually weaved together to reveal not only the truth about the Hadler family’s murder, but also of a death of one of Luke and Falk’s childhood friends that happened twenty years earlier. Told seamlessly side by side with fragments of flashbacks slipping into the narrative, the rich prose feels like you’re inside Falk’s head, finding something out about the present which sets off a memory to his past.

I didn’t connect with the characters emotionally as I did with The Survivors which is one of my favourite books, which is the only thing holding me back from giving The Dry five stars, too. But you cannot deny Jane Harper’s masterful writing. She’s quickly becoming one of my new favourite authors, and I can’t wait to read the next in the series.

I can’t wait for the film adaptation that’s supposed to be released soon! 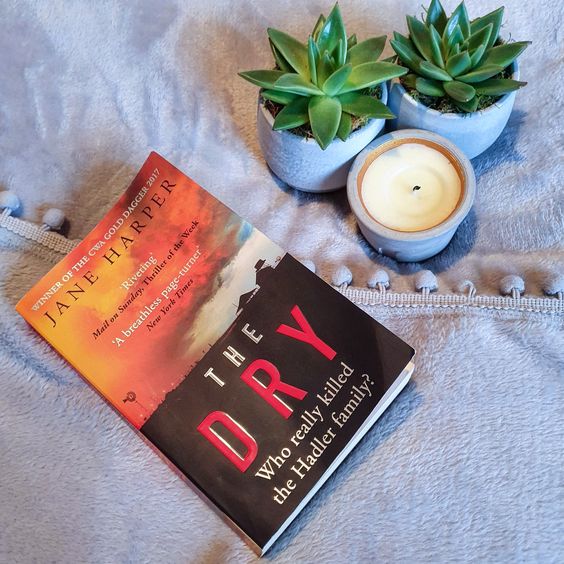