“You have to believe. Otherwise, it will never happen.”

Originally published in 2005, Stardust by Neil Gaiman tells the story of young Tristran Thorn and his adventures in the land of Faerie. One fateful night, Tristran promises his beloved that he will retrieve a fallen star for her from beyond the wall that stands between their rural English town and the Faerie realm. No one ever ventures beyond the Wall except to attend an enchanted flea market that is held every nine years (and during which, unbeknownst to him, Tristran was conceived). But Tristran bravely sets out to fetch the fallen star and thus win the hand of his love.

I love the 2007 film adaptation of Stardust directed by Matthew Vaughn so I’ve wanted to read this for a while. I knew the book wouldn’t be as cheesy or family-friendly so I was expecting a different tone, but I’m glad to say that the book is just as fun and entertaining nonetheless.

With a hint of gore, sex, and violence, Stardust is quite tame for an adult folk tale but, for me, it was the perfect balance of children’s adventure with more adult themes. Taking readers on a journey of self-discovery, it’s a charming, imaginative, and witty fantasy that is, most of all, full of heart.

I’m glad I had seen the film beforehand as there are a lot of characters and locations to get used to so it helped to have that basic knowledge instilled already. I did find the book difficult to read at times as it’s very descriptive and full of flowery language which is sometimes a lot of effort to get through, but I quickly got into it. By the end, I was in love with Gaiman’s world and characters and with the romance and magic that flowed out.

Although the book and the film each have their own qualities, Stardust is a prime example of how well a book can be adapted. Vaughn has made the story much more accessible, giving it a bigger climax at the end and exaggerating some of the characters (most notably The Captain) in a fantastic way. But of course, it’s all thanks to Gaiman’s brilliant mind and world-building that we have to thank for that.

I read this book in a day which is all part of its appeal as I wouldn’t have enjoyed it as much if it took me a long time to get through. But because it’s a quick read, it’s an easy one to be entertained by. 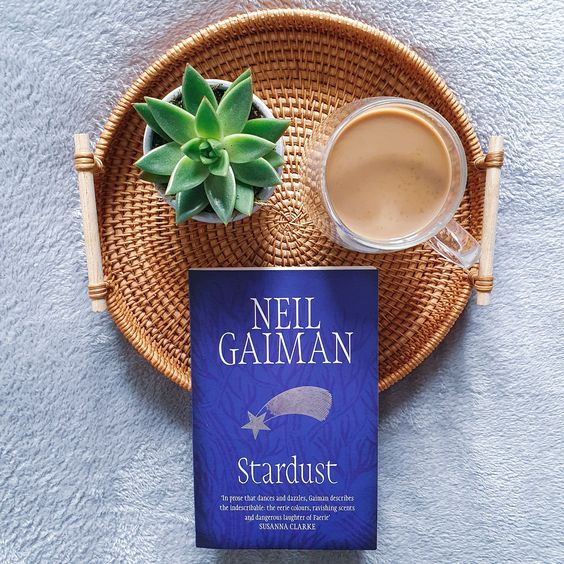