“What would happen if appeasement were offered earlier? If society treated men more gently, perhaps they would be gentler. Instead of placing them in the hard, small case of masculinity, could we allow them to feel more deeply?”

Set to be released on 4th March, Truth Be Told by Kia Abdullah follows Kamran Hadid, a wealthy, happy teenager who attends Hampton school, an elite all-boys boarding school in London. With a place at Oxford next year, he has the world at his feet. But when a night of revelry leads to a drunken encounter, his future plans are stopped in their tracks. With the help of assault counsellor, Zara Kaleel, Kamran reports the incident in the hopes that will be the end of it. But it’s only the beginning…

This is the second book in Kia Abdullah’s Zara Kaleel series after the 2019 release of Take It Back, which I didn’t know about beforehand. All I knew was that I was seeing this book everywhere with standout reviews, so I’ve been eager to get my hands on a copy for a long time now.

First off, there are some obvious trigger warnings to provide here, as this book does revolve around the subject of rape. Not only that, but it’s also a story about male rape. There are, of course, a lot of similar conversations that this book opens up in regards to the issue of rape in the wider context, but I think it’s especially bold of Abdullah to centre her story around a male character as there is still a lot of stigma around it.

A powerful and important story, Abdullah opens up so many difficult conversations which she tackles brilliantly. Looking at an encounter of rape from many angles and perspectives, her story is explored in-depth and in a well-balanced way. You try to stay open-minded but can’t help but question Kamran’s confession as different facts come to the surface. Should it matter what Kamran’s sexuality is? Should it matter if anybody else knew? There will be so much running through your head that you can’t help but feel empathy for the characters involved.

Kamran is also a Muslim which means that Abdullah also faces her character with the conflict of religion and homosexuality, something else that she does exceptionally well. While I would have been impressed by the way she handles this story without taking into consideration that Kamran is male and Muslim, the fact that Abdullah goes above and beyond to really take the opportunity to open up these discussions is worth all the praise.

We’ve got to treat men like humans, Zara, even if some do inhuman things. The majority of men are good and kind and I hope that we – not you and I but we as a society – can find our way back to that.

There are so many issues that this book makes you think about. Most notably, it gets you thinking about the importance of the phrase, “But I didn’t say no”. Unfortunately, it’s something that maybe you haven’t had to think about for yourself, but it’s likely something that you’ve skirted around the thought of. Of course, it will strike more familiarly with some than others, but it certainly had me re-evaluating certain situations in my life that I realised weren’t as black and white as we can often shrug them off as.

I think it’s that final point that had the biggest impact on me: that it isn’t just a ‘yes’ or ‘no’ question and that there is so much grey area in between. There’s so much more to consider than just a simple word, and Abdullah does a remarkable job of using her story to pose all of those questions, as well as to provide – to the best of her ability – some answers or at least a more unbiased mindset.

Wouldn’t she prefer that Kamran see this through and not have it recur years later?

And although you know it’s not important whether Kamran said no or not, you still question his intentions. Is he doing it because Finn deserves to be accountable for his actions? Or is he doing it because he doesn’t want to get found out? Either way, you won’t be thinking about the bigger picture that comes to light towards the end. I wasn’t reading this is a thriller at the start, but this revelation in the final few chapters had me gasping in shock bigger than any thriller has recently.

There’s so much that I could say about this book, but it’s one that will resonate differently with different readers so you need to experience it for yourself.

Most of all, Truth Be Told is a thought-provoking and compelling read, and I’m definitely going to find the time to read the first book in the series soon as I haven’t been able to stop thinking about this one since I put it down. 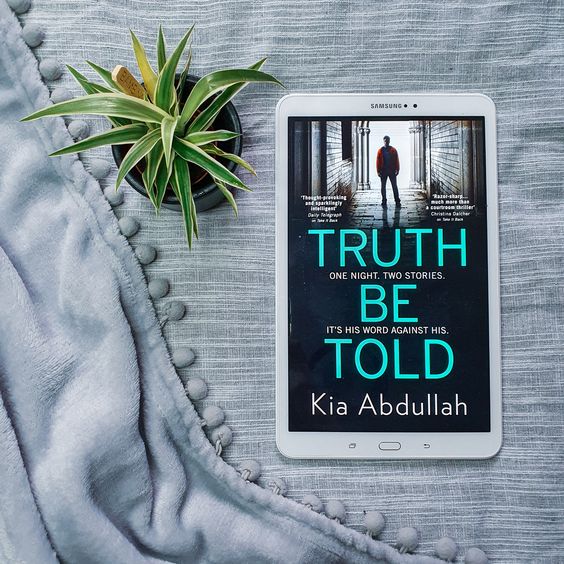