“Gazing out the cabin window at the raging blizzard, fear suddenly floods through her as she feels a stranger’s hand clamp across her mouth. No one can hear her stifled screams as she is dragged from the couch by the fire out into the snow.”

The second book in Roger Stelljes‘s Agent Tori Hunter series, The Winter Girls sees the disappearance of seventeen-year-old Savannah Devenish who vanishes from her family’s remote vacation cabin in Minnesota. Haunted by memories of her own missing sister, FBI Agent Tori Hunter vows to do whatever it takes to reunite this family and races along treacherous icy roads to be first on the scene. But when another teenager is snatched from the street, resembling a striking resemblance to Savannah with the same age with pale skin and blonde hair, what chance is there that they are being kept alive? With a deadly snowstorm closing in, Tori battles the elements as she follows the trail to an abandoned cabin by a frozen lake. Tori was too late to save her own missing sister twenty years ago, but can she find these girls before they disappear forever?

Today is my stop on the blog tour for this book. Thank you to Bookouture and NetGalley for a free advance copy of this book in exchange for an honest review.

As a huge fan of the first book in the series, Silenced Girls, which was released last year, I couldn’t wait to see the return of Agent Tori Hunter and Chief of Detectives Will Braddock.

Well constructed and full of suspense, The Winter Girls is an original and complex police procedural thriller that is heavy with action and constantly exciting.

Set in the ice-cold winter as a snowstorm closes in, the atmosphere is detailed brilliantly, working as an obstacle that heightens the constant irritation of the team always being five minutes behind. It really keeps you on your toes, knowing that Tori and Will are often so close to finding out answers as the weather holds them back from getting to where they need to be.

However, I had the same problem as I did with the first book in that some scenes felt unnecessarily long. Part of me wishes that some events were quicker to get through, but I struggle to see this as a flaw as it merely means that Stelljes has thought through every minute detail. The investigation is so well thought out that no rock gets left unturned, as the case is brimming with suspense and concludes with a nail-biting finale. I just wish it took it was a little easier to get there, at times.

My only criticism with having so much detail on the investigation, this time, is that it left little room for character development. What I loved most about Silenced Girls was that we got to know every character in-depth and I really grew to love them. But with so much time spent on unravelling the case, we didn’t get to see enough of their chemistry together, either as a team or of Will and Tori as a couple, which left me craving more time spent with them outside of the station.

I don’t normally get on with romance in detective thrillers, but Stelljes did a great job of setting up the relationship between Tori and Will in the first book, so I couldn’t wait to see more of their steamy chemistry. While they have a handful of personal conversations which explain why Tori has been quite closed off, it doesn’t escape from the fact that we just didn’t get to engage with them as much in this instalment.

For those who have read the first book, this isn’t too much of a problem as we have already spent that time getting to know them, but new readers may feel like they didn’t have enough chance to warm to them. If that’s the case, I thoroughly recommend reading Silenced Girls first as it does an excellent job of introducing you to these characters and will certainly improve your reading of this second instalment.

As somebody who was already a fan, Tori and Will remain one of my favourite detective teams, and I can’t wait for them to come back for more. 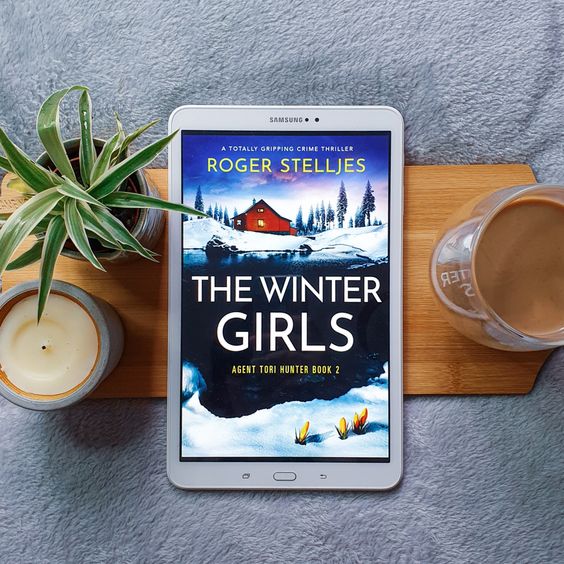 Gazing out the cabin window at the raging blizzard, fear suddenly floods through her as she feels a stranger’s hand clamp across her mouth. No one can hear her stifled screams as she is dragged from the couch by the fire out into the snow.

When seventeen-year-old Savannah Devenish vanishes from her family’s remote vacation cabin in Minnesota, FBI Agent Tori Hunter races along treacherous icy roads to be first on the scene. Savannah’s parents are frantic with worry for their beautiful, carefree girl. Haunted by memories of her own missing sister, Tori vows to do whatever it takes to reunite this family.

When the police uncover that Savannah’s father Jacob was having an affair, they suspect his involvement, but Tori is convinced his despair is genuine. Her close relationship with the chief detective means the team won’t listen, so Tori strikes off alone, persuading Savannah’s distraught best friends to share their secrets. It seems this ‘good girl’ was sneaking out to parties to meet up with a mysterious man…

Then another teenager is snatched from the street, snowy footprints and a discarded hot chocolate cup the last trace of her. The girls are the same age, strikingly pale and blonde. Is a twisted collector stealing them away? And what chance is there that they are being kept alive?

With a deadly snowstorm closing in, Tori battles the elements—and her own team—as she follows the trail to an abandoned cabin by a frozen lake. In the basement are bedrooms filled with clothes for teenage girls. Tori was too late to save her own missing sister twenty years ago, but can she find these girls before they disappear forever?

An utterly addictive and twisty crime thriller that will have your eyes glued to the pages and your heart in your mouth. Fans of Kendra Elliot, Robert Dugoni and Tess Gerritsen won’t be able to put this down.

Roger Stelljes is the acclaimed New York Times and USA Today bestselling author of pulse-pounding murder mystery and suspense novels, including the Tori Hunter and McRyan Mystery Series. Roger’s crime thrillers are noted for their fast-paced, yet intricate plots filled with layered and complex characters.

Roger started his first novel in July 2002 while on vacation in Minnesota’s Brainerd Lakes area and has been writing ever since. His debut book, The St. Paul Conspiracy, was nominated in genre fiction for the Minnesota Book Awards along with finalists Brian Freeman and William Kent Krueger. With his follow-up, Deadly Stillwater, where Vince Flynn hailed Roger as a “powerful new thriller voice”, he won the Midwest Independent Book Publishers award for commercial fiction.

Born and raised in Minnesota, Roger still lives there with his family. In addition to his work as an author, Roger is a partner in his law firm. Roger is an avid sports enthusiast and enjoys spending time outdoors boating, attending hockey games, and honing his golf game.

Find out more at: https://www.facebook.com/rogerstelljesbooks