“Some houses have their secrets. But so do some people…”

Released on 18th March, The Hiding Place by Jenny Quintana follows adopted Marina, who was found days after her birth, wrapped in a blue shawl, in the hallway of a shared house in London. When Marina finds that there’s a flat to let in the house, she hopes that moving in might hold some clues. What if it’s not just the house, though? What if someone connected to it knows what really happened that day? Someone who doesn’t want the truth to come to light?

A brilliantly-written and well-developed story, The Hiding Place is a bit of a slow-burner in the beginning but the second half really grabs your attention with its compelling and emotional story.

With great descriptions of the different settings, the story switches between 1964 and 1993 and is told through three perspectives – Connie in the past, Marina in the present, and Eva in the present. Each narrative is easy to follow and they work seamlessly alongside each other to build up to Marina finding out the truth and revealing what really happened to Connie.

Because it’s such a slow-burning story, it took me a good half of the book to really feel invested in the story. But the final 100 pages really grabbed my attention (and heart!). By then, I found the story deeply emotional. I didn’t realise how much I had connected to the characters until this point, but I felt every ache of their pain.

The book has been described as a thriller but I wouldn’t say that it is. There is a mystery at the centre of the story and some suspense in places, but this is more of a slow-burning domestic drama with a dark feel to it.

Although there is a lot of talk about abortion, there are no gruesome details to put readers off. Instead, Quintana uses her story to explore the harrowing situations that many women found themselves in during these times. It was really sad to realise that this was the norm back then, to see how little options women had and the pressures they were placed under.

The Hiding Place took a while to grip me, but I was really moved by it at the end. It’s certainly worth sticking with if you have the same issue, as the final half is sure to captivate you and pull on your heartstrings.

This was my first book by Jenny Quintana but I will definitely be adding her others to my wishlist now. 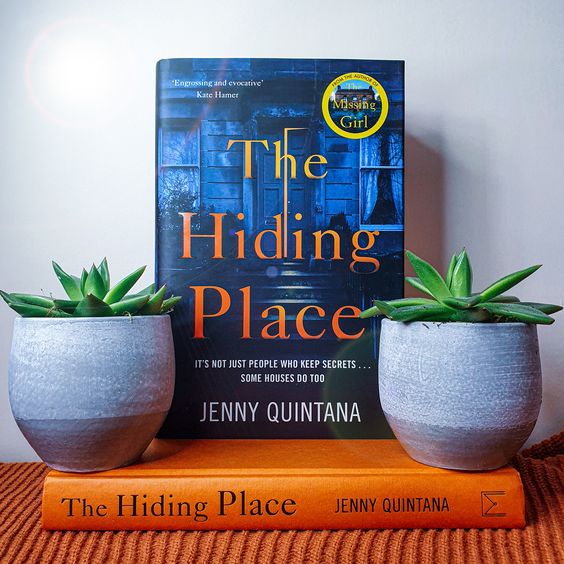 From Jenny Quintana, the bestselling author of The Missing Girl and Our Dark Secret, comes The Hiding Place: a story about identity, love, long-buried secrets and lies.

Marina is adopted. She’s always known this – but the circumstances of her birth remain a mystery. Baby Blue, the newspapers nicknamed her at the time, after she’d been found wrapped in a blue shawl, in the hallway of a large, shared house in London.

24 Harrington Gardens. That was the house. And it’s still standing now Marina is an adult; still split into flats. And one of them is to let…

Of course, Marina knows that the chances of her uncovering the truth about her birth are remote – but she hopes the house might hold some clues.

What if it’s not just the house, though? What if someone connected to it knows what really happened that day? Someone who doesn’t want the truth to come to light?

JENNY QUINTANA grew up in Essex and Berkshire before studying English Literature in London. She has taught in London, Seville and Athens. Her first novel, The Missing Girl was published in 2017 and chosen as a Waterstones thriller of the month. Our Dark Secret, her second novel, was published in 2020. She now lives with her family in Berkshire.

2 thoughts on “BOOK TOUR: The Hiding Place by Jenny Quintana”