Written by Madeline Miller and published in 2011, The Song of Achilles follows Patroclus, an awkward young prince who has been exiled to the court of King Peleus. There, he meets Prince Achilles. By all rights, their paths should never cross, but Achilles takes the shamed prince as his friend. As they grow into young men skilled in the arts of war and medicine, their bond blossoms into something deeper, despite the displeasure of Achilles’ mother Thetis, a cruel sea goddess. But then word comes that Helen of Sparta has been kidnapped. Torn between love and fear for his friend, Patroclus journeys with Achilles to Troy, little knowing that the years that follow will test everything they hold dear.

The Song of Achilles is a breathtakingly beautiful story about the powerful, undying love between two people and the sacrifices they must make against the backdrop of a bloody and brutal war.

I loved Patroclus and Achilles so much and it was so lovely to see their relationship develop. Their chemistry is so seductive and alluring that I couldn’t help but be pulled in by Miller’s descriptive and poetic narrative that tugs on every single heartstring.

With much of the story set during the epic Trojan War (based on the events in Homer’s The Illiad), there’s a lot about this story that feels familiar. But I love how Miller makes her stories of these famous Greek gods and kings feel so original. She gives each character such a full personality, drawing on their unique traits and showing us a fresh side to their often brutish personas to make their stories easier to remember and their names stand out above all others.

But obviously, I knew of Achilles’ fate that was ahead of them, so I was constantly nervous about how the story would come to an end. All you want to do is step in and save these characters from themselves! But it’s Greek mythology, and their fates have been sealed. And while I didn’t want Patroclus and Achilles’ story to finish, the ending is so beautifully fitting that I turned the final page full of warmth.

The Song of Achilles is a gorgeous book and I absolutely love the masterful way that Miller crafts her stories. Just like Circe, this is instantly another favourite of mine. 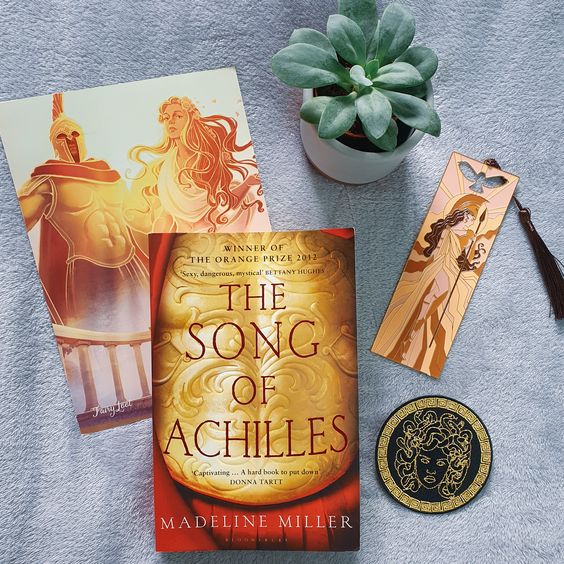 2 thoughts on “Book Review: The Song of Achilles by Madeline Miller”