“Only men are affected by the virus; only women have the power to save us all.”

Released in April 2021, The End Of Men by Christina Sweeney-Baird is set in the year 2025 in a world where a mysterious virus has broken out in Scotland, a lethal illness that seems to affect only men. When Dr Amanda MacLean reports this phenomenon, she is dismissed as hysterical. By the time her warning is heeded, it is too late. The virus becomes a global pandemic, and the victims are all men.

Thank you to Tandem Collective, Borough Press, Harper Collins, and Christina Sweeney-Baird for inviting me to join in the readalong for this book and for a free copy in exchange for an honest review.

The End of Men is a book that you will want to read from the title and synopsis alone. My husband certainly raised his eyebrows, but he was quickly comforted by how emotional I thought it was for so many of these characters to lose their male loved ones.

And it certainly is an emotional read. Written two years ago, it’s amazing how close Sweeney-Baird’s book feels to our current situation. Had we not been faced with a pandemic in reality, there are many things that I wouldn’t think were plausible. But now we know how pandemic works [or doesn’t], it’s so fascinating to see how much she got so accurate.

Although there are many feminist discussions to be had around the concept of introducing a female-dominated world, I didn’t find the book preachy or imbalanced. It’s interesting to think of the leaps in gender politics that would be made, but Sweeney-Baird doesn’t ignore the problems that a reduction in the male population would mean either. From the personal losses to the changes in the workforce and fertility, she does a fantastic job of trying to turn over every rock.

The biggest problem some will find is that the book is very basic in its use of gender roles and sexuality, so some readers will have issues with the gaps in its very generic definitions. I understand why this is as the author chose to write a book about men and women, which was always going to come under the spotlight, and neglects to look past biological sex, so it does feel a little outdated in that it doesn’t completely reflect our time.

However, we have to remember that this is only a piece of fiction and it isn’t meant as a factual report. Sweeney-Baird definitely could have done more, but I do think that she tries to address a lot of things, far more than I expected her to. Instead, her focus is on her feminist approach to the story, which she explores much more in-depth.

Taking the book as it is, I found it an insightful, compelling, and intelligent piece of speculative fiction. The characters are engaging, their situations are relatable (more than Sweeney-Baird would have ever imagined!), and the structure very immersive.

For me, there were just a few too many characters for me to emotionally connect with their personal stories fully, which is the only thing that prevented me from loving it more, but I still come away from this book feeling every ounce of Sweeney-Baird’s efforts to explore as much of this world as she could. 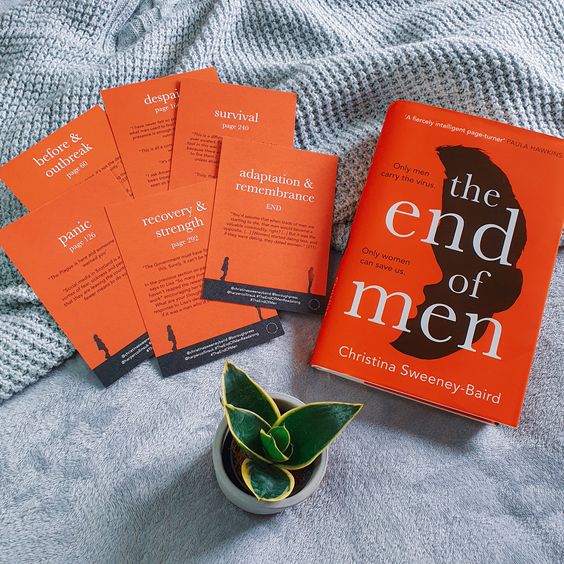 GLASGOW, 2025. Dr Amanda Maclean is called to treat a young man with a mild fever. Within three hours he dies. The mysterious illness sweeps through the hospital with deadly speed. This is how it begins.

The victims are all men.

Dr Maclean raises the alarm, but the sickness spreads to every corner of the globe. Threatening families. Governments. Countries.

Can they find a cure before it’s too late? Will this be the story of the end of the world – or its salvation?

Compelling, confronting and devastating, The End of Men is the novel that everyone is talking about.

I wrote The End of Men in 2018 and 2019 before Coronavirus and could never have expected the parallels between the real world and my fiction that would ensue. I’ve been told by some early readers though, that The End of Men has made them feel better about the world we live in today. The book has a lot of hope and is, ultimately, about human resilience and our ability to cope with the extraordinary.

My debut novel, The End of Men, will be released on 29 April 2021 and is to be published in 15 languages. The End of Men explores the question: what would the world look like without men? It follows characters as they try and keep their families safe, recover and rebuild the world after a deadly virus to which women are immune kills 90% of the male population. You follow characters like Dr Amanda Maclean, a Glaswegian A and E consultant, who treats Patient Zero and is desperate to keep her two sons safe; Elizabeth Cooper, a young American scientist who helps to create a vaccine in London; and Catherine Lawrence, an anthropologist who wants to record and commemorate what’s happening in the world.

I live in London where I work full-time as a corporate litigation lawyer. I write 1,000 words a day in the evenings and on weekends, fuelled by 7up Free, green tea and snacks.

3 thoughts on “READALONG: The End Of Men by Christina Sweeney-Baird”