“The brain does curious things when suddenly presented with something it cannot comprehend.”

The Last Girl by Goldy Moldavsky, originally titled The Mary Shelley Club in the US, follows new girl Rachel Chavez who turns to horror movies for comfort, preferring them to the bored rich kids of her fancy New York High School. But then Rachel is recruited by the Mary Shelley Club, a mysterious student club that sets up terrifying Fear Tests; elaborate pranks inspired by urban legends and horror movies. But when a sinister masked figure appears, Rachel realises that her past has caught up with her. It’s time for the ultimate prank to play out…

Thank you to Tandem Collective and Electric Monkey for a free advance copy of this book in exchange for an honest review.

The Last Girl is an exciting young adult thriller that brilliantly captures the trapped-in horror atmosphere of being stuck in a maze, chased by masked figures, not knowing which way to turn and who to follow.

It’s a fun and fast-paced story that will keep you guessing. Above all else, it’s a brilliant homage to horror films. There are plenty of references to fill you with nostalgia and horror tropes that will lure you in, and I finished the book with the urge to get out the popcorn and put on a slasher.

It wasn’t quite what I was expecting as I thought there would be more action, so I was a little disappointed at first. But it is a young adult story and not an adult slasher, so of course the action is mild and the themes are more PG.

I would have liked to get to know the characters’ backstories a little more, but I love Moldavsky’s idea of the club and where she takes it. Although I was constantly waiting for blood to spill, I enjoyed how the story was rounded up in the end and I came away appreciating its more realistic approach to the entertaining concept. 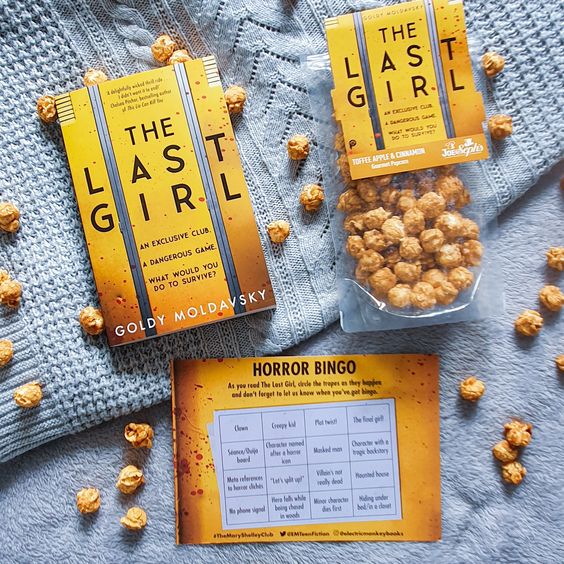 2 thoughts on “Book Review: The Last Girl by Goldy Moldavsky”