“She has an easy life – but makes a living from pretending otherwise. She has a husband who hates the spotlight – but can’t step away. She has a million followers who adore her – but one who wants her to suffer. She hasn’t realised her family is in danger yet – but she will.”

People Like Her by Ellery Lloyd follows Instagram sensation, Emmy Jackson, known by her fans as Mamabare. People have always liked Emmy, especially online where she is famous for always telling the unvarnished truth about modern parenthood. But Emmy isn’t as honest as she’d like the fans to believe. She may think she has her followers fooled, but someone out there knows the truth and plans to make her pay. Because people like her have no idea what pain careless words can cause. Because people like her need to learn what it feels like to lose everything…

Thank you to Tandem Collective, Pan Macmillan, and Ellery Lloyd for inviting me to join in the readalong for this book and for a free copy in exchange for an honest review.

I don’t always agree with giving trigger warnings early as I know they can spoil the book for some readers, but I really think this needs one regarding the topic of infant death and miscarriages as I found this book really hard-hitting. I did still really enjoy this book, though, so let’s get to the good bits before I make a few comments.

People Like Her brilliantly explores the darker side of social media and the dangers of having so much of your life readily available and permanently online. Incredibly well-paced and keeping you constantly on the edge of your seat, this is definitely a thriller that will have you hooked and get you caught up in the moment.

Ellery Lloyd is the pseudonym for husband and wife co-authors Collette Lyons and Paul Vlitos, but I found that the narrative flowed well and never felt repetitive, which is something I have experienced from other books with multiple authors. Instead, this gave Emmy and Dan two very distinct voices and two very different outlooks on the influencer life, which really helped to vamp up the tension.

There is a kind of dark satire running throughout the narrative as I kind of loved the fact that I hated Emmy (and even Dan by the end), as I actually found myself rooting for the third unnamed narrative at times, despite knowing that they were a possible threat. But this third narrative seemed to be the only voice of reason, so I ended up putting my trust in them to make these characters see some sense.

However, as much as I disliked Emmy, her outcome was a little too extreme for me. Because of the hard-hitting topics discussed, I came away from this book feeling really downbeat. I don’t mind books taking a dark route and I do think Ellery Lloyd justifies their use of this subject. But I really needed an author’s note or some kind of advice page at the end of this book to leave me feeling more comfortable.

I don’t want to spoil anything, but the parenting subject I am referring to is seen in a really bad light. This is something I did with both my two boys. I know that anything you do needs to be thoroughly researched and the risks weighed up, but I think this book could be quite scary for new mothers or mums-to-be, as no advice or support is provided at the end.

Other than that, I found this a really gripping read. It tackles some very relevant issues and combines them with a nail-biting thriller to make this a read to remember. 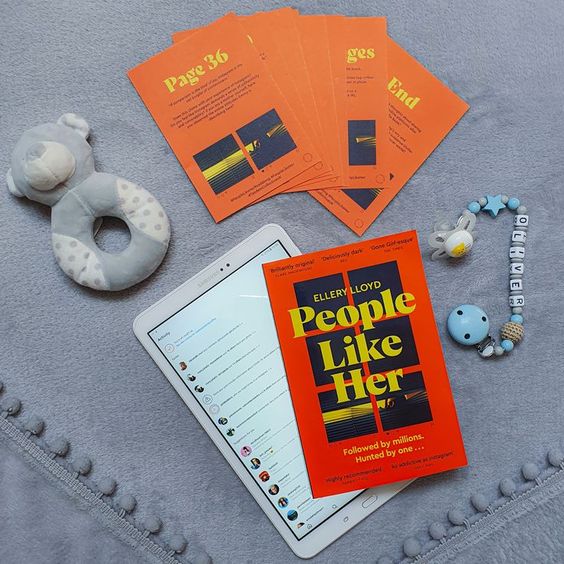 People like Emmy Jackson. They always have. Especially online, where she is Instagram sensation Mamabare, famous for telling the unvarnished truth about modern parenthood.

But Emmy isn’t as honest as she’d like the fans to believe. She may think she has her followers fooled, but someone out there knows the truth and plans to make her pay . . .

A smart and thrilling debut that delves into the darkest aspects of influencer culture, Ellery Lloyd’s People Like Her is about what you risk losing when you don’t know who’s watching . . .

Collette is a journalist and editor, the former content director of Elle (UK) and editorial director at Soho House. She has written for The Guardian, The Telegraph, and The Sunday Times.

Paul is the author of two previous novels, Welcome to the Working Week and Every Day is Like Sunday. He is the program director for English Literature with Creative Writing at the University of Surrey.