“It is hardwired into us that we should placate and mollify: bend our will to that of men.”

Published in 2018, Anatomy Of A Scandal by Sarah Vaughan follows a scandal amongst Britain’s privileged elite and the women caught up in its wake. James is a loving father, a handsome man, a charismatic and successful public figure. And yet he stands accused of a terrible crime. His wife Sophie is convinced he is innocent and desperate to protect her precious family from the lies that threaten to rip them apart.

The prosecution is being led by Kate, an experienced lawyer who knows that the law is all about winning the argument. And yet Kate seeks the truth at all times. She is certain James is guilty and is determined he will pay for his crimes. But who is right about James: Sophie or Kate? And is either of them informed by anything more than instinct and personal experience?

Anatomy Of A Scandal is an intriguing domestic suspense that gives a fascinating look into the UK’s judicial and class system, discussing a very topical subject that forces the reader to ask yourself some important questions about justice.

The cover of the book screams “shocking”, “gripping” and “suspenseful”, which is great for a typical thriller that concentrates on plot. For me, however, this book is much more of a character study. Vaughan brilliantly intertwines these characters’ complex histories and, as the title suggests, picks apart this scandal to reveal layers of deceit, secrets, and lies.

I did really enjoy this book and thought that the twists were brilliant, but it just wasn’t what I was expecting it to be. Because of my expectations, I was always waiting for something darker to be revealed. Most of all, I was expecting Kate to be more ruthless, but I found that the scenes in the courtroom to be fairly underwhelming in the end.

So those senses of shock and suspense just didn’t come to light for me, but Anatomy Of A Scandal is still a brilliantly written book that opens up some very important discussions. I would have just enjoyed it a whole lot more if I wasn’t expecting more thriller qualities to it.

The book has recently been adapted and is due to be released as a six-part drama on Netflix starring Sienna Miller as Sophie, Michelle Dockery as Kate, Rupert Friend as James, and Naomi Scott as Olivia. 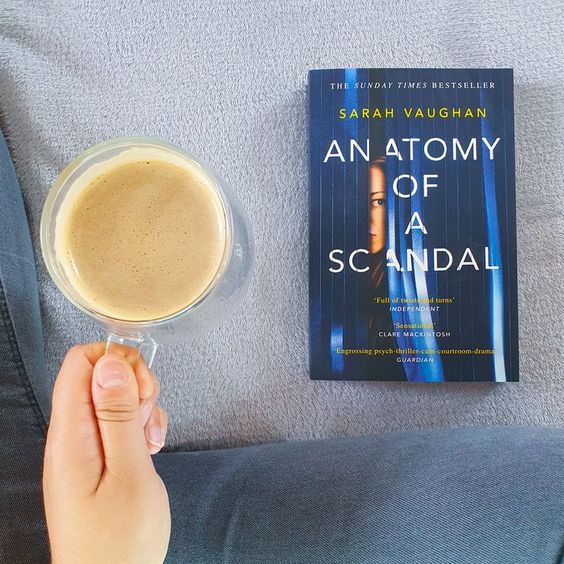 One thought on “Book Review: Anatomy Of A Scandal by Sarah Vaughan”