“Some lessons can be deadly…”

Published earlier this month, For Your Own Good by Samantha Downing follows Teddy Crutcher who has just won Teacher of the Year at the prestigious Belmont Academy. Everyone thinks he’s brilliant. They all smile when he tells us his wife couldn’t be more proud – though if they stopped to think about it, they would realise no one has seen her in a while. They’re impressed when he doesn’t let anything distract him – even the tragic death of a school parent. Even when the whispers start, saying it was murder.

Today is my stop on the blog tour for this book. Thank you to Penguin Michael Joseph and NetGalley for a free advance copy of this book in exchange for an honest review.

A gripping and immensely entertaining thriller, For Your Own Good is a high-tension story led by a host of complex characters, all of whom have a secret to hide.

I was immediately drawn into this high school setting, and it’s great to see a thriller set (mostly) from the point of view of the coffee-fuelled teachers who are trying to keep it all together, rather than the angsty youngsters who are often the cause of any trouble.

Told through multiple perspectives which helps to build the picture of what’s really going on behind closed classroom doors, there’s so much intrigue in this story. But although you know who the killer is early on as and there’s plenty that’s laid out to you straight away, there are so many other little twists that sneak in unsuspectingly to make you question what you’re reading.

There is always something more going on, and I loved getting to know every character and question their motives. My only issue is that I was told to expect a shocking and dark twist at the end, a Downing trademark. And while there are some great twists that will shock most readers, I was expecting something more so it didn’t quite hit the mark for me.

Still, I really enjoyed reading this one and I can’t wait to pick up My Lovely Wife next!

It has also been recently announced that Robert Downey, Jr’s production company have picked up the book for a TV adaptation which I think will be brilliant! I am definitely up for RDJ taking on the role of Teddy, too! 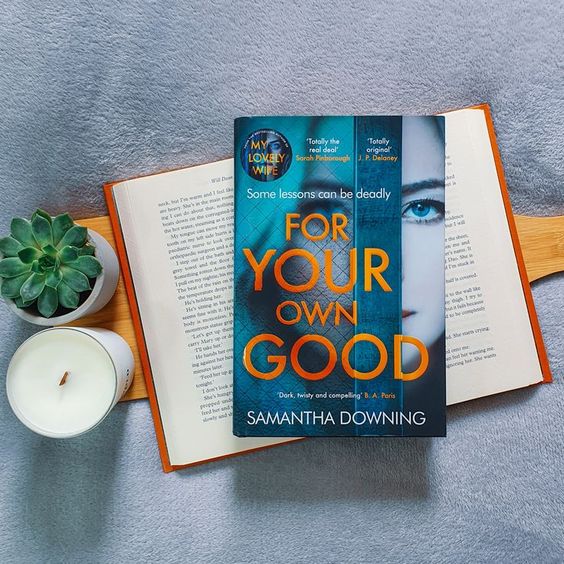 Teddy Crutcher has just won Teacher of the Year at the prestigious Belmont Academy, home exclusively to the brightest and the best. He says his wife couldn’t be more proud – though no one has seen her in a while. He’s deeply committed to improving his students. And well aware which ones need improving. And all he wants is for his colleagues – and the endlessly interfering parents – to stay out of his way. Oddly, not everyone agrees that Teddy has their best interests at heart.
But will that change when someone receives a lesson to die for…?

Samantha Downing lives in New Orleans. Her debut novel, My Lovely Wife, was a Richard and Judy Book Club pick and has been published in thirty languages. It won a Dead Good Reader Award, and was shortlisted for four other major awards: The CWA John Creasey Dagger, The Edgar Award for Best First Novel, The ITW Thriller Award for Best First Novel and The Macavity Award for Best First Mystery. There will also be a forthcoming film adaptation, produced by Nicole Kidman. Her second novel, He Started It, was also a Sunday Times bestseller.

2 thoughts on “BLOG TOUR: For Your Own Good by Samantha Downing”