Set to be published on 2nd September, Next Of Kin by Kia Abdullah follows sisters Leila and Yasmin who have always been close. So when Yasmin’s husband, Andrew, asks Leila to take her nephew, Max, to nursery, she’s more than willing to help out, despite her busy schedule. Hours later, Andrew goes to pick up Max from nursery. But he isn’t there. Leila was supposed to drop Max off that morning. But she forgot. Racing to the car park, she grasps the horror of what she has done. Max has been locked in her car for six hours on the hottest day of the year. She’s too late.

From the synopsis alone, it’s obvious that this story comes with some trigger warnings. It’s a harrowing and heartbreaking read, but one that will keep you firmly gripped until the final page.

Opening with an intense and upsetting situation, Next Of Kin is an absolute emotional rollercoaster. I was on the brink of tears throughout, and literally on the edge of my seat as twist after twist unravels to reveal the truth about what at first seems like a straightforward case.

This is a standalone book and not part of Abdullah’s Zara Kaleel series, but they do feel very similar with the courtroom setting and in-depth look into a deeply emotional case. The courtroom scenes are tense and the complex relationships are brilliantly explored, constantly leaving you with the feeling that something more is going on.

I was absolutely gripped throughout, which is all down to Abdullah’s immensely powerful writing. I was drawn into every character’s perspective – Yasmin as a grieving mother, Leila as the blamed victim, and Andrew as the husband who’s left to pick up the pieces. But I was not ready for what was to come.

It’s not often I give a full five stars, and I would give this book more if I could. I’m so often underwhelmed by legal thrillers that either pull you in emotionally but lack in shocks, or that are full of twists but neglect to connect you to the characters. Next Of Kin, however, does both on such a high level, and it’s definitely going to remain one of my favourite reads of this year.

This is the second book that I have read by Kia Abdullah and my second instant five-star rating for her work, so it’s safe to say I am a big fan of her work. She has quickly become an auto-buy author for me, and I can’t wait to see what she writes next. 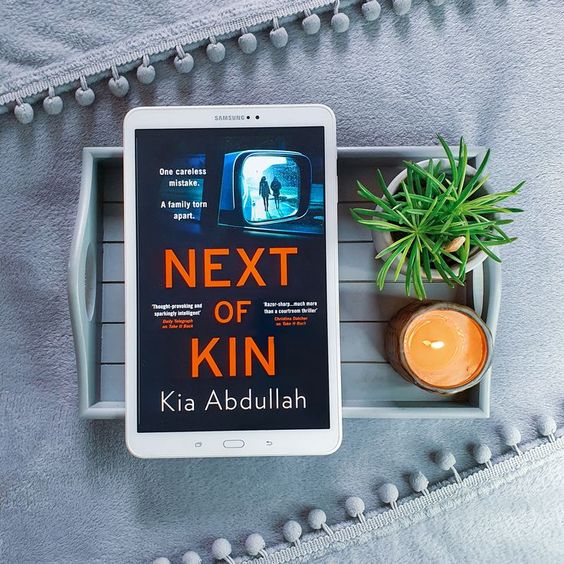