“He came. He left. Nothing else had changed. I had not changed. The world hadn’t changed. Yet nothing would be the same. All that remains is dream-making and strange remembrance.”

Originally published in 2007, Call Me By Your Name by André Aciman follows 17-year-old Elio at his family’s cliff-side mansion on the Italian Riviera, who develops a relationship with a summer guest. Unprepared for the consequences of their attraction, at first each feigns indifference. But during the restless summer weeks that follow, their passion intensifies as they test the charged ground between them.

What grows from the depths of their spirits is an experience that marks them for a lifetime. For what the two discover on the Riviera and during a sultry evening in Rome is the one thing both already fear they may never truly find again: total intimacy.

Call Me By Your Name is a gorgeously written story that explores an alluring but forbidden romance in a beautifully raw way. It’s a powerful story that feels incredibly personal, and it’s these overwhelming emotions that make me love this book so much.

Aciman’s rich descriptions read so poetically that you know this is going to be a painful read, but one you want to go through with. It’s that constant wrestle between right and wrong that I engaged with so much. Because while Elio’s infatuation borders on obsessive, haven’t we all been there?! I could completely relate to his internal struggles over what Oliver is thinking about, where he is going, analysing his words and actions, and, in the end, wondering whether it was what he wanted after all.

Elio and Oliver’s intoxicating and intimate relationship is such a physical experience. There’s always something lingering that feels wrong about their feelings but you want their desire to win through. Of course, Elio does take some of his infatuations to some extremes, so I can understand the struggles that some people have with this book. But it’s a fictional story, not meant for every single person to relate to at every single moment. And personally, I feel like their actions felt very genuine to them and their situation.

I absolutely love these characters that Aciman has created, and it certainly got my heart racing often. However, I do think my love of this book heavily relies on my love of the film, which is one of my absolute favourites. I’ve watched it many, many times, and because of that, I have already spent a lot of time swooning over Elio and Oliver’s passion for each other and many tears have been shed over their romance comes to an end.

The film is a brilliant adaptation, but I really enjoyed reading where the story originated. While the ending of the film is one of my favourites as Elio stares into the fire and thinks about his time with Oliver, the book allows you to see more into their future, into how they have moved on years after their first meeting, which I found just as heartbreaking.

Two things have prevented me from giving this book a full five stars. First, the whole section in Rome which I didn’t enjoy at all. And secondly, there are a few comments that made me feel a little uncomfortable, although I do think that they had their purpose rather than condoning anything unethical.

Aside from that, I absolutely adore this story and Elio and Oliver are characters that I will always want to return to. 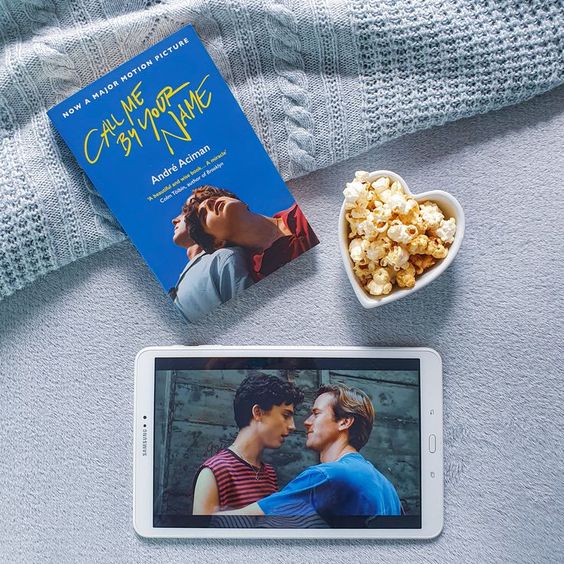