The Hideout by Camilla Grebe sees 18-year old Samuel finds himself at the centre of a drug deal gone wrong. Forced to go underground to escape the police and an infamous drug lord, he seeks refuge in a sleepy town in the Stockholm archipelago and takes a job as a personal assistant to a disabled boy. But when Samuel moves in with the beautiful Rachel and her son Jonas, he soon realizes that nothing is quite what it seems . . .

Meanwhile, the bodies of young men have been washing ashore in the archipelago and investigator Manfred Olsson fears that they have a killer on the loose.

Well written and deeply layered, The Hideout is a tense Nordic crime story with strong characters and a brilliantly original concept.

It’s certainly a slow-burning story and it did take me a good while to get into it, which is my only negative as I did enjoy what unfolded when it finally got there. But with a lot going on at the start and with many unconnected characters, it took so long for me to feel engaged that I would have enjoyed it much more if it were 100 pages shorter.

But in the end, that all adds to the Nordic atmosphere. I usually prefer my thrillers more psychological rather than crime-related, but the balance works really well here. It’s a great crime story that oozes with its Swedish setting and intense characters, and I could definitely see this being made into a TV series.

Although it took a while to get there, I really loved the concept and the characters are so well developed that you do feel invested by the end. If you like a slow-paced Nordic crime story then this is definitely worth picking up! 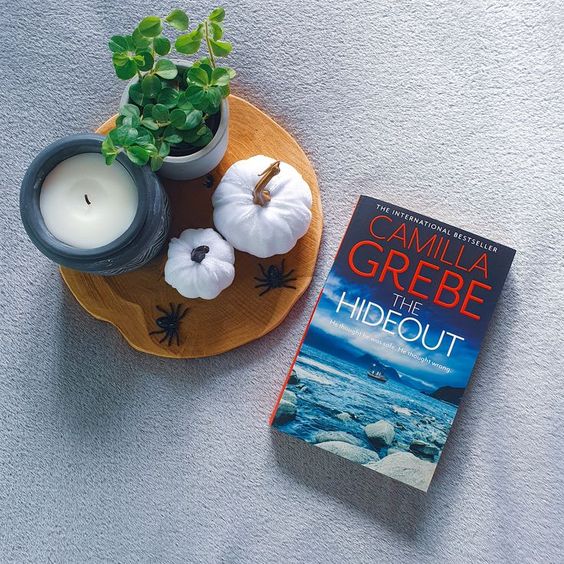 When the body of a young man washes ashore in Stockholm’s southern archipelago, Manfred Olsson is called in to investigate. But with his daughter, Nadja, in a coma, it is with some reluctance that he leaves his wife alone by their child’s bedside.

Elsewhere, eighteen-year-old Samuel lives with his hard-working single mother, Pernilla. His charm has always been able to get him out of trouble, but when he finds himself in the middle of a drug deal gone wrong, he is forced to make a run for it.

With nowhere to go, and with both a drug lord’s gang and the police at his heels, Samuel seeks refuge in a sleepy town in the Stockholm archipelago, where he takes a job as a live-in assistant to the son of a wealthy family. But it isn’t long after Samuel moves in with the beautiful Rachel and her son, Jonas, that he realises nothing is quite as it seems…and Manfred is on the hunt for a killer.

Camilla Grebe was born in 1968 in Stockholm, Sweden. She holds a degree from the Stockholm School of Economics and was a co-founder of audiobook publisher Storyside. Together with her sister Åsa Träff she has written five celebrated crime novels about psychologist Siri Bergman. The first two books in the series were nominated for Best Swedish Crime Novel of the Year by the Swedish Crime Writers’ Academy. Grebe has also written the popular Moscow Noir trilogy with Paul Leander-Engström.

With The Ice Beneath Her, Grebe breaks out as a solo author with a unique voice and a masterful handle on suspense.