“Loneliness came over him, like an avalanche of snow. He was alone. Where he had always wanted to be. You can only trust yourself. There’s a rat buried deep in everybody and they’ll rat on you if they get pushed far enough.”

With the film tie-in paperback due to be released on 9th December, Nightmare Alley by William Lindsay Gresham was first published in 1946 and follows a young and ambitious carny, Stan Carlisle, who plays a mentalist on stage alongside his harried wife. Soon enough, he graduates to a full-blown spiritualist, catering to the needs of the rich and gullible in their well-upholstered homes. It looks like the world is Stan’s for the taking.

An American noir classic, the first few chapters of Nightmare Alley had me gripped as it opens with an intriguing insider’s glimpse into the shadowy world of the travelling circuses and carnivals of 1940s America and the tricksters that often lurk in them – from the hustlers, fake psychics, to the femmes fatales.

But as the book goes on to explore the lowest depths of showbiz, the writing becomes very dense and the themes very heavy, which doesn’t make for an easy read. It reminded me of American Psycho in that the characters are very tragic with many self-destructive traits. And while you can see why it’s considered a classic due to its themes of the post-war American dream, there’s no getting around it feeling like a very heavy read.

Author Gresham was working as an editor of a true-crime magazine while writing this book, and it has that same sense of bleakness to it, based on the experiences of a former carnival worker whom he got to know during the war. There’s certainly a lot to enjoy about it, but I felt the weight of the low mood too often to be able to say that I had fun reading it.

I do think that it’s going to be a brilliant film, though, so I have to applaud Gresham for his fantastic story. Sometimes it’s just easier to watch depressing situations than to read about them, and it feels like the perfect film for Guillermo del Toro to add a touch of fantastical light to the harrowing darkness of it all.

Nightmare Alley may not be an easy book to read, but it’s a very clever and original creation with a lot to be impressed by. I can’t wait to see the film, which is set to star Bradley Cooper, Cate Blanchett, Toni Collette, Willem Dafoe, Richard Jenkins, and Rooney Mara, and released on 21st January. 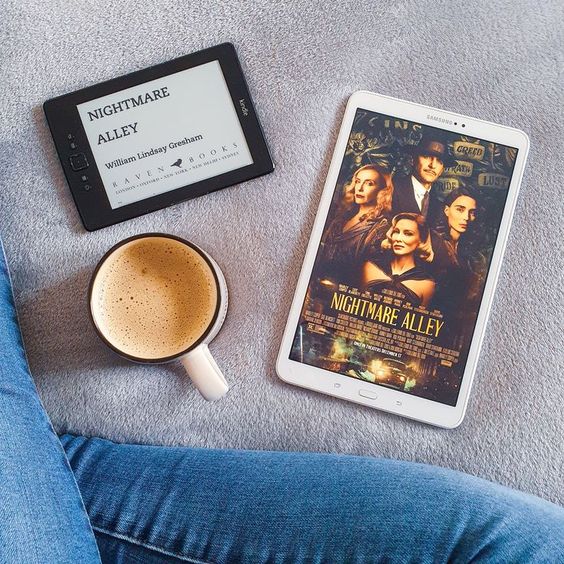