“She thought the murders had stopped. She was wrong…”

Published on 3rd February, A Flicker In The Dark by Stacy Willingham follows Chloe Davis who, when she was twelve, six teenage girls went missing in her small Louisiana town. By the end of the summer, Chloe’s father had been arrested as a serial killer and promptly put in prison. Chloe and the rest of her family were left to grapple with the truth and try to move forward while dealing with the aftermath. Now, 20 years later, Chloe is a psychologist and getting ready for her wedding. She finally has a fragile grasp on the happiness she’s worked so hard to get. Sometimes, though, she feels as out of control of her own life as the troubled teens who are her patients. And then a local teenage girl goes missing, and then another, and that terrifying summer comes crashing back. Is she paranoid, and seeing parallels that aren’t really there, or is she about to unmask a killer for the second time in her life?

Today is my stop on the Insta Book Tours book tour for this book. Thank you to Zaffre for a free advanced copy of this book in exchange for an honest review.

A Flicker In The Dark is a dark and twisty psychological thriller full of misdirection and suppressed secrets with an explosive ending that will have you gripped.

Initially, the book is quite slow and I was unsure of what direction it was going to go in. Was this just a study of somebody related to a serial killer and the effect that situation can have on somebody so young? Or was more going to happen?

But I didn’t really mind either way, as I loved how Willingham explored Chloe’s character. Although she’s obviously damaged, she’s a really interesting and engaging character. As it’s hinted that something more is going on around her, it’s put in your head that she could be unreliable, or even just a little sensitive, and not to trust things so straightforwardly from her perspective, as the build-up of something more terrifying is developed really well.

And then the twists come! I had actually predicted the final revelation, but I was convinced that I was wrong and was led down so many different routes that it still all came as a big shock in the end, so I really enjoyed this twisted journey that Willingham took me on.

I really enjoyed the setting, too, and the description of the marshes around Chloe’s house made everything feel even more sinister, as I genuinely felt like I was reading this through the fog in the dark with the flicker of a torchlight.

For a debut, A Flicker In The Dark is outstanding and I hope Willingham writes more soon! It’s also been reported that the book is soon to be a major TV series, developed by Emma Stone, which is great news! 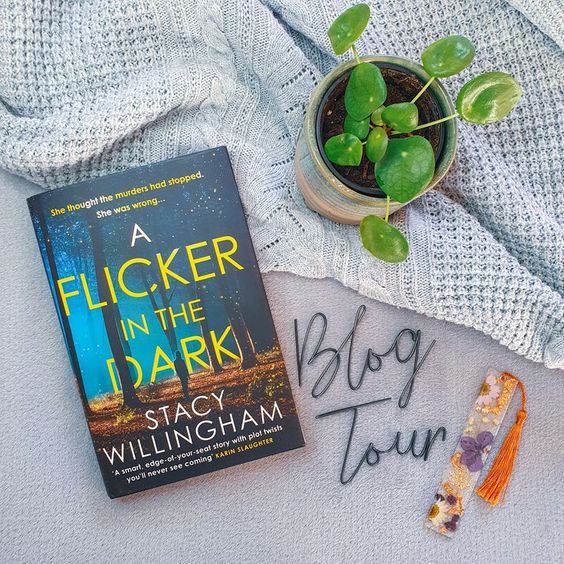