“A tangled web of lies draws together three women in this explosive thriller of revenge, murder and shocking secrets.”

The Lying Club by Annie Ward is set at an elite private school nestled in the Colorado mountains, where Natalie, an office assistant, dreams of having a life like the school moms she deals with every day. Women like Brooke — a gorgeous heiress, ferociously loving mother and serial cheater – and Asha, an overprotective mom who suspects her husband of having an affair. Their fates are bound by the handsome assistant athletic director Nicholas, whom Natalie loves, Brooke wants and Asha needs. But when two bodies are carried out of the school one morning, it seems the tension between mothers and daughters, rival lovers, and the haves and have-nots has shattered the surface of this isolated, affluent town—where people stop at nothing to get what they want.

Today is my stop on the book tour for this book. Thank you to the publishers for a free advanced copy of this book in exchange for an honest review.

The Lying Club is a unique and fun thriller that starts with unlikeable, entitled characters and toxic relationships but ends with a camaraderie of women who had each lost their identity in some way.

Admittedly, I was unsure of how much I was going to enjoy this book at the start because I always struggle to relate to books about rich American women. I have absolutely nothing in common with their lifestyles so I often found myself rolling my eyes at their rich people’s problems. But then I realised that there are some problems that only rich people can have, and I soon began to find it a lot more interesting as the truth began to unravel.

There’s initially a lot of detail that, although it slows the pace in the beginning, allows you to get to know the characters really well. And that was really important for this book to do, as it heavily relies on you getting behind these characters to understand their actions.

But while it takes a while for the action to come into play, I really enjoyed the path that the story eventually starts to go down. The book tackles a unique and also very relevant topic and Ward addresses some important social issues around class, entitlement, power and privilege alongside her very well-developed thriller.

I would have liked the present story in the police station to be better weaved into the story for it to feel more gripping, but I ended up really enjoying this thriller and its characters. Overall, this is a great read for the evening with a chilled bottle of wine and I definitely intend to read more by Ward in the future.

On a slight side note, I really think that the book missed a trick by not ending with the women cheers-ing to being in The Lying Club. I would have loved for the title to be incorporated somehow and I think this would have been just the right amount of cheesy to work. 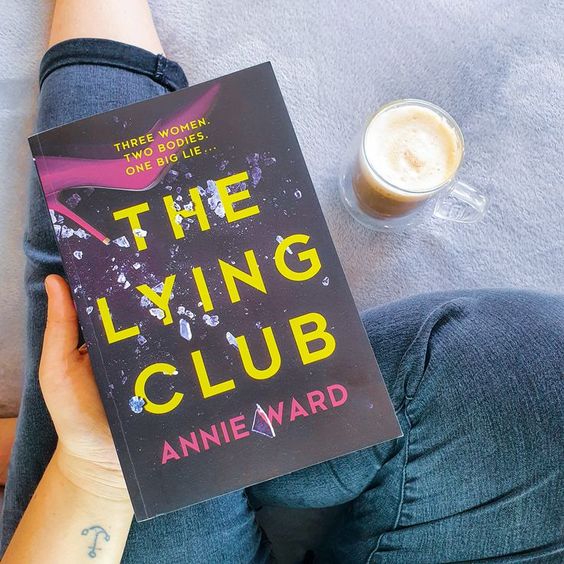 At an elite private school nestled in the Colorado mountains, a tangled web of lies draws together three vastly different women. Natalie, a young office assistant, dreams of having a life like the school moms she deals with every day. Women like Brooke-a gorgeous heiress, ferociously loving mother and serial cheater-and Asha, an overachieving and overprotective mom who suspects her husband of having an affair.

Their fates are bound by their relationships with the handsome, charming assistant athletic director Nicholas, who Natalie loves, Brooke wants and Asha needs. But when two bodies are carried out of the school early one morning, it seems the jealousy between mothers and daughters, rival lovers and the haves and have-nots has shattered the surface of this isolated, affluent town-a town where people will stop at nothing to get what they want.

Set in a world of vast ranches, chalet-style apartments and mountain mansions, The Lying Club is a juicy thriller of revenge, murder and a shocking conspiracy-one in which the victims aren’t who you might think.

Annie received a BA in English Lit with an emphasis in Creative Writing from UCLA and an MFA in Screenwriting from the American Film Institute. While studying at AFI, she sold her first short screenplay to MTV/ BFCS Productions. Starring Adam Scott, STRANGE HABIT became a Grand Jury Award Winner at the Aspen Film Festival and a Sundance Festival Official Selection.

After film school, Annie moved to Eastern Europe to work for Fodor Travel Guides, covering regions of Spain and Bulgaria. She remained in Bulgaria for five years spanning a civilian uprising and government overthrow. The novel THE MAKING OF JUNE, which Annie wrote with the Bulgarian revolution and Balkan crisis as its backdrop was sold to Penguin Putnam and published to critical acclaim in 2002.

During Annie’s five years in the Balkans she received a Fulbright Scholarship, taught at the University of Sofia, and script doctored eight screenplays for Nu-Image, an Israeli/American film company that produced a number of projects in Bulgaria for the SyFy Channel. She was later the recipient of an Escape to Create artist residency.

She lives in Kansas City, Kansas with her family.