“I keep feeling like I’m being watched – dropping the boys off at school, choosing wine at the supermarket – but when I turn around there’s nobody there…”

Published in 2019, Single by KL Slater follows single mother Darcy whose son injures himself at a local playground. So when a local doctor with strong hands, a twinkling in his eyes and an easy charm pushes her aside and saves her son’s life, he seems almost too good to be true.

George is a single parent too. As coffee becomes lunch and lunch becomes dinner, it doesn’t take long before they can’t go an evening without seeing each other. But when an obsessed ex-girlfriend gives Darcy a warning, Darcy doesn’t know who to trust. Whatever the truth, she’s starting to suspect that she might have put her beloved boys into terrible danger.

I’ve only read one book by Slater before but I didn’t enjoy the way it ended so I was really eager to give another one of her books a go. And I’m so glad I did, as I had a lot of fun reading this one.

Single is a classic page-turner of a psychological thriller with lots of clever misdirections, entertaining twists, and shocking revelations. Although the concept feels quite generic for a thriller, it still stood out with Slater’s solid writing, fast pace, and well-developed characters.

I really enjoyed how the story evolved with these two characters who you start off wanting to get together after their tough pasts have given them enough reasons for wanting to stay single, as they progress into a relationship full of so many complications that you’re soon convinced that relationships aren’t worth the hassle.

The multiple narrators give so many red herrings that I was unable to predict any of what was going on, and I really enjoyed the journey it took me on. I definitely recommend this if you’re looking for an easy but highly entertaining read. 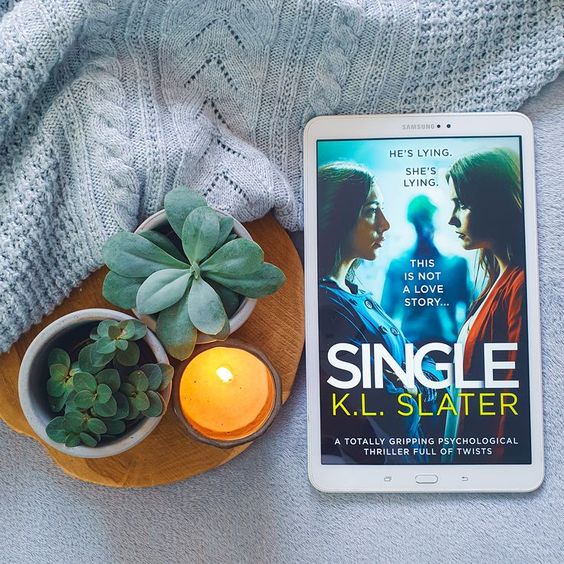