“When a woman steps out of line and contravenes the feminine norm, whether on social media or on the Victorian street, there is a tacit understanding that someone must put her back in her place.”

Published in 2020, The Five by Hallie Rubenhold is a non-fiction account of Polly, Annie, Elizabeth, Catherine and Mary-Jane, who are famous for the same thing. They came from Fleet Street, Knightsbridge, Wolverhampton, Sweden and Wales. They wrote ballads, ran coffee houses, lived on country estates and escaped people-traffickers. What they had in common was the year of their murders: 1888. Their murderer was never identified, but the name created for him by the press has become far more famous than any of these five women.

The Five is a fascinating true crime book, shining the light on those who deserve to be remembered instead of the soulless individual who cut their lives short.

While I would give more than five stars to Rubenhold’s mission to give these women back their stories, it’s not all easy to read. And I don’t mean that in relation to the troubles in their lives, but rather the ebbs and flow in the narrative as you learn about the complete history of these women, from their upbringing to what led them to be known as nothing more than a prostitute.

It’s just very detailed and not all of it is interesting, so it doesn’t always hold your attention easily. But you still have to praise Rubenhold, a historian, for her meticulous research and commitment to unravelling as much information as she can about these women. Not every detail can be riveting, so it’s completely understandable that not every sentence is a shocking revelation.

What I have learnt overall from reading these stories is just mind-blowing. With no hard evidence to suggest that three of his five victims were prostitutes at all, it’s amazing to learn about the hardships that women during this era were often faced with, and how a small string of bad luck could lead them into the worst of situations.

I can see why so many people recommend this book as it is vital that we take the time to educate ourselves more instead of finding only entertainment in true crime. I do now think of these five women as people rather than just the victims of a serial killer, whose “skill” has also massively gone down in my opinion after learning more about him, so Rubenhold has certainly does her job well. 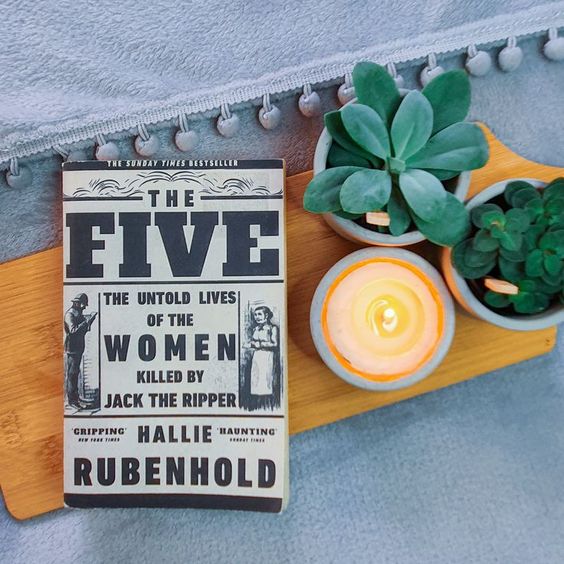