“You don’t need your eyes to love, right? You just feel it inside you.”

Published in 2012, Wonder by RJ Palacio follows August Pullman who was born with a facial difference that, up until now, has prevented him from going to a mainstream school. Starting 5th grade at Beecher Prep, he wants nothing more than to be treated as an ordinary kid — but his new classmates can’t get past Auggie’s extraordinary face.

If you ever need a story about love, acceptance and, most of all, kindness, then look no further than this uplifting, heartwarming, and emotional book.

Wonder is an inspiring and thoughtful story about the importance of being kind and not judging others by their appearance. We all have our flaws, but the need to be accepted can be so overwhelming, especially at such a young age.

While it’s primarily aimed at readers in their school years, I think people of all ages will benefit from its important messages. I certainly did. Although I think Auggie’s story is more upbeat and positive than most real-life situations are, Wonder is still full of depth, highlighting many of Auggie’s struggles and challenges while Palacio gets her messages through clearly via the amazing support that Auggie has around him.

I really loved all of the characters. They all filled me with so much warmth, as Palacio uses multiple narratives to look at the effects of Auggie’s situation from not only his point of view, who is so funny and caring despite how terrified he must be, but also of those around him – from those who love him the most, to those who have gotten to know him more recently.

Both the book and film adaptation are remarkable. The film cast every role perfectly. I never imagined Owen Wilson as a father figure before, but he and Julia Roberts are the perfect actors to play Auggie’s parents, and I just adore Jacob Tremblay. I would have also loved a teacher like Daveed Diggs!

This is definitely a book that will have a permanent place on my shelf, ready to read with my boys one day, especially if they were to ever need some encouragement to treat others with more kindness. 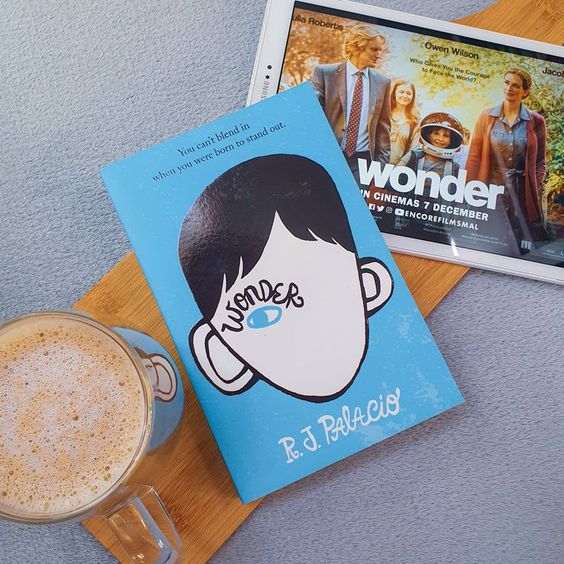 One thought on “Book Review: Wonder by RJ Palacio”