“Can’t you see that it just goes on, over and over? The gods demand their justice, but we suffer for it, every time.”

Set to be released on 28th April, Elektra by Jennifer Saint follows the cursed House of Atreus, a bloodline tainted by a generational cycle of violence and vengeance. This is the story of three women, their fates inextricably tied to this curse, and the fickle nature of men and gods: Clytemnestra, the sister of Helen and wife of Agamemnon. Cassandra, Princess of Troy. And Elektra, the youngest daughter of Clytemnestra and Agamemnon, who is horrified by the bloodletting of her kin. But can Elektra escape the curse, or is her own destiny also bound by violence?

Rich in detail with luscious descriptions and powerful characters, Elektra gives an original voice to a well-told Greek tale.

Compelling, captivating, and completely absorbing, Elektra is brought to life with Saint’s beautifully poetic prose. Any time that she described the weather or the sea, I felt the setting wash over me, as her three powerful leading women take the stage to share their experiences of the consequences of men.

Each character is written with such dedication and the perspective of their story is absolutely fascinating. I’ve heard of Helen and Agamemnon before, of course, and already knew the reasons for the battle of Troy, but Saint focuses on the characters who are left behind by the men who go off to fight in honour of their own egos–the ones who were actually most affected by it.

While Elektra gives this book its title, she only really becomes prominent in the final part of the book, as the story is more about the situations going on around her which mould her into the woman she becomes. I didn’t find her particularly likeable as she’s a hard character to sympathise with, but I also found the arc of her story so interesting. And as far Cassandra and Clytemnestra, they were both so engrossing, and it is their perspective that gives this story such a unique spin.

Although the book is only 352 pages long, it did feel a little long in places which is the only thing that has prevented me from giving it a full five stars. I usually read more than one book at once, but I was completely consumed by this book and couldn’t concentrate on anything else. And the story does span over ten years so Saint does a fantastic job of fitting so much into so few pages. But it still took me three days to make my way through, so the pace did drag out for me, which really is my only criticism.

For fans of Greek mythology, Elektra is set around the time of the Trojan war so it does cover some familiar ground, but it also adds so much more to the story. For readers who haven’t read a lot of Greek mythology before, I’m sure you will still enjoy this retelling but I would recommend reading a few others books first. Stephen Fry’s Mythos is an easy and enjoyable way to get used to many of the character names, while Madeline Miller’s The Song Of Achilles gives a lot of insight into those at the centre of the Trojan war which will add a lot of context to this story.

I also still have Jennifer Saint’s Ariadne waiting for me. And after this, it’s definitely high on my priorities! 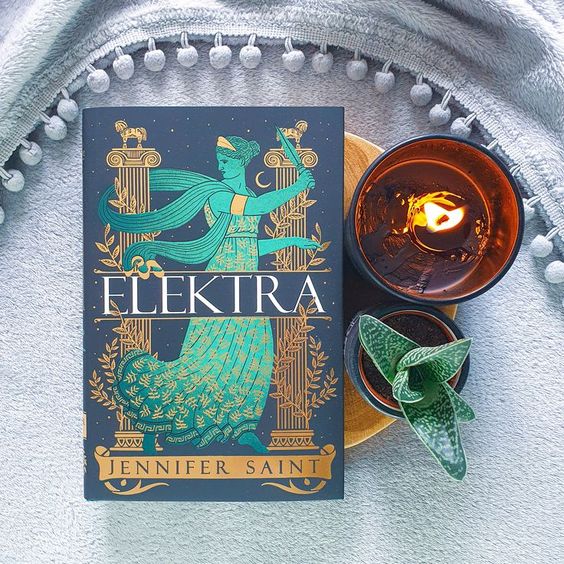