“IT WAS JUST SUPPOSED TO BE A FAMILY VACATION.
A TERRIBLE ACCIDENT CHANGED EVERYTHING.
YOU DON’T KNOW WHAT YOU’RE CAPABLE OF UNTIL THEY COME FOR YOUR FAMILY.”

Thank you to the publishers for a free copy of this book in exchange for an honest review.

Just like with McKinty’s other books (If you like thrillers, I’m sure you would have read The Chain already!), The Island has a brilliant premise that screams an exhilarating adventure, a page-turning thriller, and an inevitable disaster.

As soon as I read the synopsis, I was excited to get stuck in! The concept is dark and disturbing and I almost began hyperventilating just from the thought of what was going to happen in this fearsome setting.

However, I struggled at the very beginning to get into this one. I found the start very choppy, moving from one place to the next without any smooth transitions, and also caught on to a few inaccuracies which slowed down my anticipation.

But I absolutely loved the initial events on the island. The family’s arrival is chaotic and filled with dread, and the thought of this ominous tightly-knit clan really filled me with fear. It reminded me of the 2020 Jude Law series The Third Day and I could really get a sense of this nightmarish atmosphere.

Unfortunately, the pace didn’t pick up enough for me after this first part. The events that followed were undoubtedly full of tension, but the excitement wasn’t there. And instead of building up to a climactic ending, it all ran quite flatly. I wasn’t left shocked or as if I could finally catch my breath, and instead was left wanting more.

The characters are developed well and I really enjoyed the dynamics of their unusual family bond. But I wanted the Australian setting to be used more. A spider is seen very briefly and the possibility of sharks is said to prevent the family from swimming to safety, but I wanted these Australian threats to heighten their situation more. For me, it really needed to play on this original setting to really get my heart racing.

Although the story lacked enough thrills for me, it has recently been announced that the book is set to be adapted into an original series and I think McKinty’s story will be gripping to see unfold on-screen. 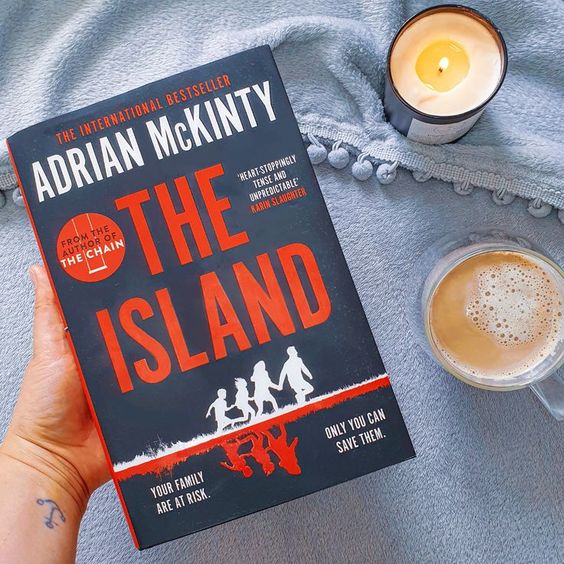 IT WAS JUST SUPPOSED TO BE A FAMILY VACATION.

A TERRIBLE ACCIDENT CHANGED EVERYTHING.

YOU DON’T KNOW WHAT YOU’RE CAPABLE OF UNTIL THEY COME FOR YOUR FAMILY.

After moving from a small country town to Seattle, Heather Baxter marries Tom, a widowed doctor with a young son and teenage daughter. A working vacation overseas seems like the perfect way to bring the new family together, but once they’re deep in the Australian outback, the jet-lagged and exhausted kids are so over their new mom.

When they discover a remote Dutch Island, off-limits to outside visitors, the family talks their way onto the ferry, taking a chance on an adventure far from the reach of iPhones and Instagram.

But as soon as they set foot on the island, which is run by a tightly knit clan of locals, everything feels wrong. Then a shocking accident propels the Baxters from an unsettling situation into an absolute nightmare.

When Heather and the kids are separated from Tom, they are forced to escape alone, seconds ahead of their pursuers.

Now it’s up to Heather to save herself and the kids, even though they don’t trust her, the harsh bushland is filled with danger, and the locals want her dead.

Heather has been underestimated her entire life, but she knows that only she can bring her family home again and become the mother the children desperately need, even if it means doing the unthinkable to keep them all alive.

Adrian McKinty was born and grew up in Belfast, Northern Ireland. He studied politics and philosophy at Oxford University before moving to New York in the mid 1990s. His first novel Dead I Well May Be (loosely based on his experiences as an illegal immigrant in the US) was published in 2003. In 2012 after moving to Australia with his wife and children he began publication of the critically acclaimed Sean Duffy series. In 2019 after giving up writing Adrian had a global hit with his standalone novel The Chain. Adrian’s books have won the Edgar Award, the Ned Kelly Award (3 times), The Anthony Award, Barry Award, Macavity Award and the Theakston Old Peculier Crime Novel of the Year Award. His books have been translated into over 40 languages.

3 thoughts on “Book Review: The Island by Adrian McKinty”