“Everyone’s always going through something, aren’t they? That’s life, basically. It’s just more and more things to go through.”

Published in 2017, Conversations With Friends by Sally Rooney follows twenty-one-year-old Frances, a student in Dublin and an aspiring writer. At night, she performs spoken word with her best friend Bobbi, who used to be her girlfriend. When they befriend Melissa, a well-known journalist who is married to actor Nick, they enter a world of beautiful houses, raucous dinner parties and holidays in Provence. But when Frances and Nick get unexpectedly closer, the emotion-averse Frances is forced to honestly confront her own vulnerabilities for the first time.

It’s not often I “fangirl” over anything but wow, Sally Rooney really gets me. Conversations With Friends is like my mood wrapped up in a book. It took me right back to my “youth” and filled me with the nostalgia of my university days but also of the emotional turmoil that often came with them.

The dialogue is realistic, the characters feel very genuine, and the whole feel of the book is something I could completely engage with. For some, the pace will be slow, the characters will be unlikeable, and the morals will be wrong. But for me, this story is so contemplative of what it means to be young and invulnerable.

We made bad choices out of a desire to be wanted, we thought little of the consequences and often learnt little of our mistakes, but we lived in every moment as we knew they wouldn’t last long. I’m not sure what that says about me but I love that Sally Rooney transported me there, as she brilliantly captures this transformative period in our lives.

As one of my favourite quotes by Daphne du Maurier says:

“They are not brave, the days when we are twenty-one. They are full of little cowardices, little fears without foundation, and one is so easily bruised, so swiftly wounded, one falls to the first barbed word.”

This feeling is exactly what this book encapsulates for me. And if I ever wanted to write a book, I would want it to conjure the emotions that Conversations With Friends does so flawlessly.

I did listen to the audiobook of this book so I managed to avoid the lack of speech marks in my physical copy which did worry me a little, but Aoife McMahon narrates the audiobook really well. I love listening to books by Irish authors with an Irish narrator so this added a lot more to the story for me.

I also really loved the recent BBC TV series which is a brilliant adaptation. It started off a little slow but Alison Oliver, Sasha Lane, and Joe Alwyn give fantastic performances and the soundtrack is beautiful. I did not want it to end. 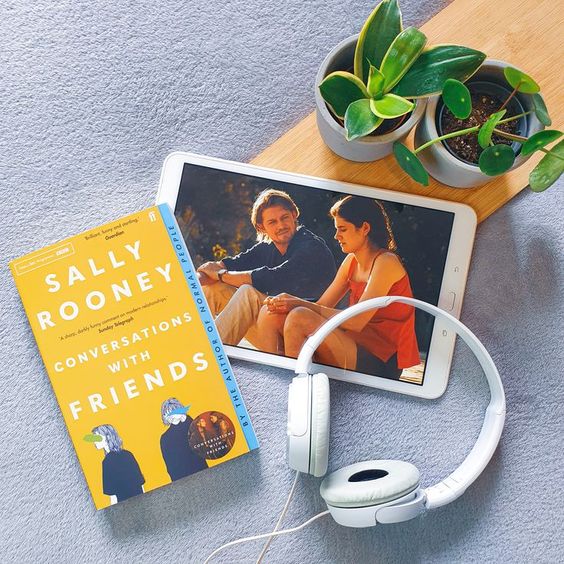