“Once again I’m struck by melancholy. I want to spend the rest of my life studying Eridian biology! But I have to save humanity first. Stupid humanity. Getting in the way of my hobbies.”

Published in 2021, Project Hail Mary by Andy Weir follows Ryland Grace, the sole survivor on a desperate, last-chance mission. If he fails, humanity and the Earth itself will perish. Except that right now, he doesn’t know that. He can’t even remember his own name, let alone the nature of his assignment or how to complete it. All he knows is that he’s been asleep for a very, very long time. And he’s just been awakened to find himself millions of miles from home, with nothing but two corpses for company.

His crewmates dead, his memories fuzzily returning, he realizes that an impossible task now confronts him. Alone on this tiny ship that’s been cobbled together by every government and space agency on the planet and hurled into the depths of space, it’s up to him to conquer an extinction-level threat to our species. And thanks to an unexpected ally, he just might have a chance.

I very rarely read science fiction but Andy Weir made it so easy for me to enjoy The Martian that I couldn’t wait to try another book by him. And Project Hail Mary is just as mind-blowing, intelligent, gripping, humorous, and thought-provoking.

My love of this book came from how relatable and likeable Weir made Ryland right from the outset. At first, Ryland wakes with no knowledge of where is or why he’s there, so his confusion allows you to engage with him easily from the get-go. Weir then develops the story brilliantly to slowly reveal why Ryland was chosen for this mission, what he has to do, and why it’s so important, and I’m again blown away by Weir’s imagination.

I wouldn’t know the first thing about what it takes to get a person into space, but Weir makes writes such accessible sci-fi’s that you don’t doubt for a second that this could all actually happen. Primarily set in space, told alongside a past narrative that sees the planning for the mission, there is again a lot of science, maths and hypothesising that would normally go over my head, but Weir is such a great writer that he makes you feel intelligent enough to understand everything that’s going on.

And let’s not forget Ryland’s new ally. I won’t say more about him as I loved the not knowing, but he has definitely become one of my favourite fictional characters. Their story reminds me of Ted Chaing’s The Story Of Your Life which is a fantastic short story (and another one of my favourite films), but the conversations here are so much more personal and hilarious.

If you find science-fiction difficult to read but fancy trying out an exciting space adventure for a change, I can’t recommend this author enough. And just like The Martian was adapted back in 2015, I really hope they turn this book into a film, too.

Within the first few minutes of the audiobook, I was laughing out loud. This is largely due to Ray Porter‘s fantastic narration which brings out that sarcastically amusing wit of Ryland.

I had so much fun listening to this, and I always find that listening to an audio version of a book that you know you might struggle with makes the story much easier to follow, so I definitely recommend giving this a listen for both sci-fi fans and newbies alike. 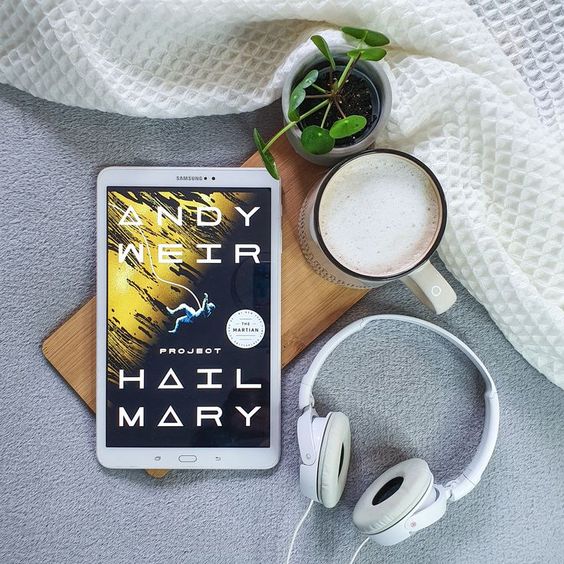