“This is the story of how a young woman became a monster. And how she was never really a monster at all.”

Published in 2022, Stone Blind by Natalie Haynes tells the story of Medusa, the only mortal in a family of gods. Growing up with her sisters, she quickly realizes that she is the only one who gets older, experiences change, feels weakness. Her mortal lifespan gives her an urgency that her family will never know.

When desire pushes a God to commit the unforgivable, Medusa’s mortal life is changed forever. Her punishment is to be turned into a Gorgon: sharp teeth, snakes for hair, and a gaze that will turn any living creature to stone. Appalled by her own reflection, Medusa can no longer look upon anything she loves without destroying it. She condemns herself to a life of solitude in the shadows to limit her murderous range.

That is, until Perseus embarks upon a fateful quest to fetch the head of a Gorgon…

Told in beautiful alternating prose, Stone Blind is a fascinating retelling of one of the most popular stories in Greek mythology, that of Medusa and the man who slayed the “monster”, Persues. But Medusa was no monster, and it’s about time that we got to know the woman before her curse.

Like Haynes’ other retellings, Stone Blind is told through multiple narratives, from Medusa and Perseus, to the snakes in Medusa’s hair and an olive tree close by. It’s what makes Haynes’ writing so unique, using imaginative ways to give memorable outside perspectives. I always find her writing so captivating, and I especially loved the chapters told in third person as they question your interpretation of a story we have already made judgement on.

The only thing that prevented me from giving this a full five stars is that I wanted to feel more compelled to Medusa’s character. I definitely learnt a lot from this retelling and most certainly feel differently about her character now, but there were a lot of distractions which took away some of the engagement for me.

But while these “distractions” deterred from Medusa’s story somewhat, they also give you a much wider context into what every character was going through at this time, and I always appreciate gaining more knowledge in this genre. A must-read for fans of Greek mythology! 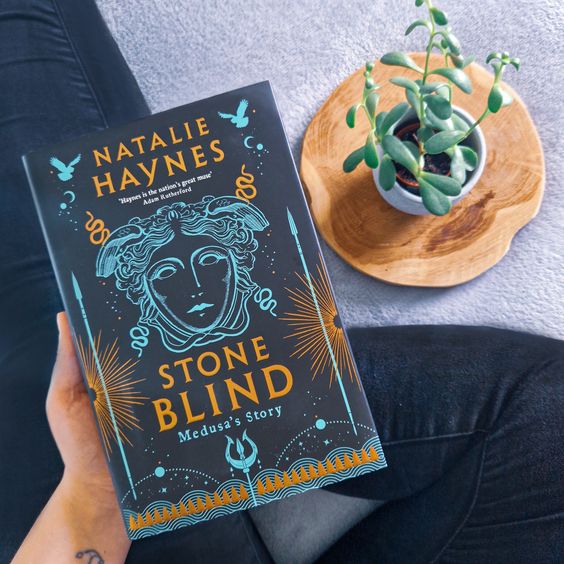 One thought on “Book Review: Stone Blind by Natalie Haynes”